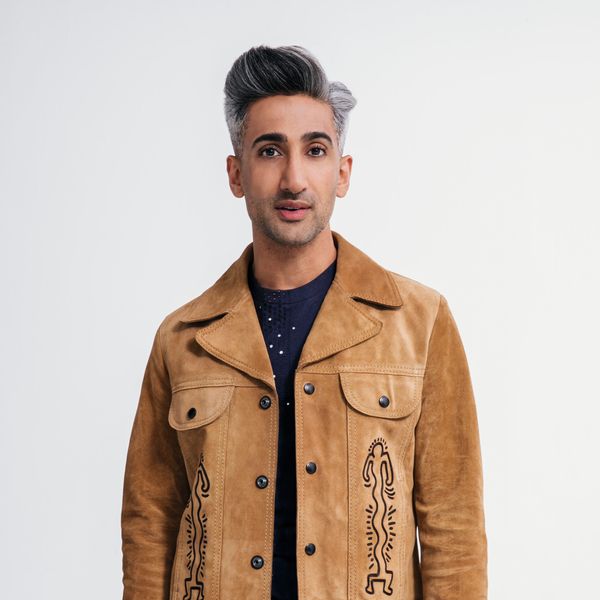 Netflix's Queer Eye reboot is famous for many things: heartwarming emotional bonding, avocados, tears, displays of questionable culinary skill. But if one was to choose a single visual signifier for the show, it would be a floral button down. Fashion expert Tan France was rarely without a collared shirt celebrating the Earth's bounty, and he frequently encouraged the show's subjects, called "heroes," to buy the same (and to always style them with a "French Tuck"). They were everywhere!

But France is branching out. In July, he posted a picture of himself on Instagram in a full Yeezy look, with nary a pattern in sight. Just a few days later, news broke that he would be styling streetwear enthusiast Pete Davidson's wedding. And then last night, at the NYC opening of theatrical body modification exhibition A. Human, he told us that the days of botanical button downs were long over.

"Let me give you one little teaser as to what season three [of Queer Eye] is all about," France said. "You will not see me in one floral shirt! Not one! And I've not told anybody else!"

We were honored to receive the scoop.

"I wore a lot of floral shirts last year," he continued. "I wore six. People thought I wore them every day, but I wore six. This year, not one. I've evolved!"

As France's colleague Jonathan Van Ness said during the very first episode of Queer Eye, "When people say, 'You can't teach an old dog new tricks,' it's not true, because you can reinvent yourself and learn new things whenever you want."

Season three is coming to Netflix in 2019.