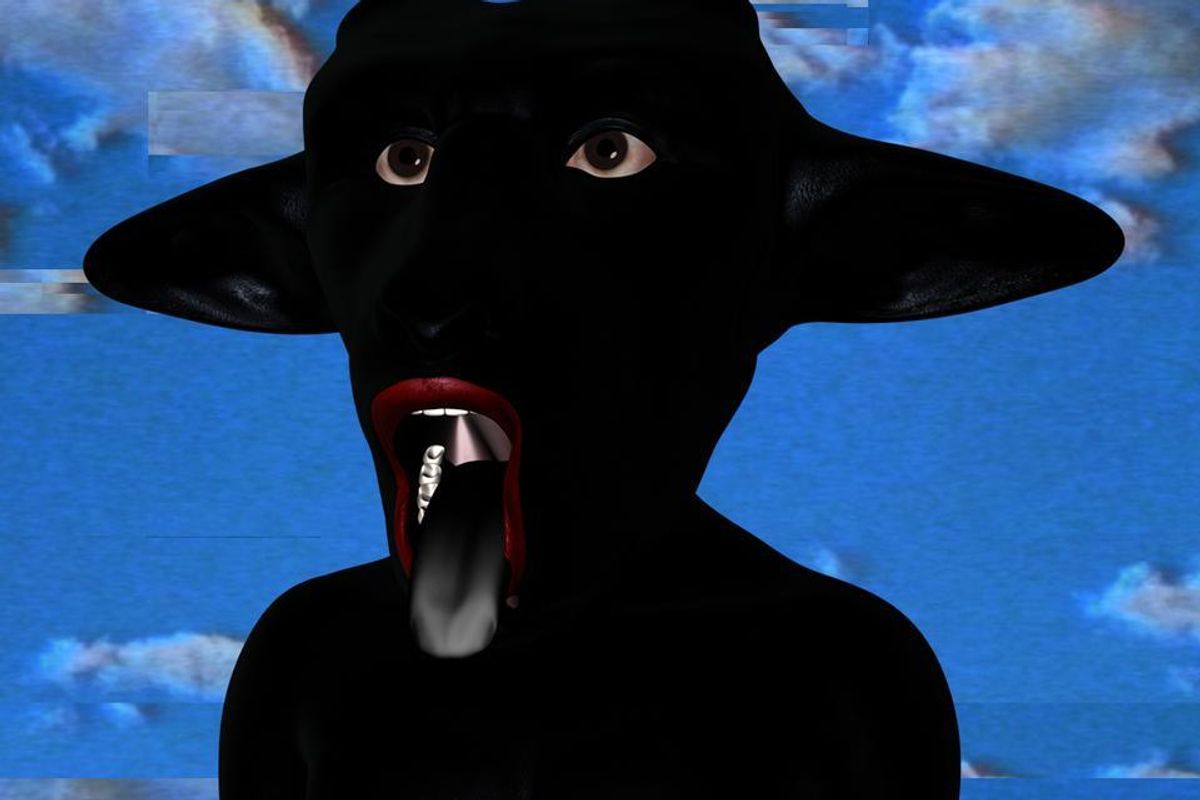 Talking with Mark Sabb About His 3D Exploration of Solitary Confinement

Our friends at NewHive are currently in the midst of a two-week-long series of commissioned artworks exploring privacy, surveillance and prison reform, and in conjunction, we'll be running a series of accompanying interviews, features and essays by the featured artists. The fifth installment of this series comes in the form of an interview with artist Mark Sabb about his project, Visions.

Mark Sabb, aka Mark Digital, is a net artist and founder of the FELT collective. Mark's art focuses on themes related to gangsta rap, black history and culture, and the youth-oriented energy of hip hop. From the initial founding of FELT Mark has infused politics and protest into his brand of internet art.

Visions is his 3D interactive website exploring the concept of mental deterioration due to solitary confinement in prisons.

"… in 1951 researchers at McGill University paid a group of male graduate students to stay in small chambers equipped with only a bed for an experiment on sensory deprivation… The plan was to observe students for six weeks, but not one lasted more than seven days. Nearly every student lost the ability "to think clearly about anything for any length of time," while several others began to suffer hallucinations. "One man could see nothing but dogs," wrote one of the study's collaborators, "another nothing but eyeglasses of various types, and so on."

" Stuart Grassian, a board-certified psychiatrist and a former faculty member at Harvard Medical School, has interviewed hundreds of prisoners in solitary confinement. In one study, he found that roughly a third of solitary inmates were "actively psychotic and/or acutely suicidal." Grassian has since concluded that solitary can cause a specific psychiatric syndrome, characterized by hallucinations; panic attacks; overt paranoia; diminished impulse control; hypersensitivity to external stimuli; and difficulties with thinking, concentration and memory. Some inmates lose the ability to maintain a state of alertness, while others develop crippling obsessions."

We spoke with Mark about hallucinations, empathy and the prison industrial complex.

From whose vantage point is the perspective of this piece?

Mine. Yours. Ours. I hope that visitors to Visions put themselves in the situation presented, imagining themselves in captivity. On the page one cannot move, you're in a fixed position and you're being surrounded by hallucinations. When I was a child I had a really horrible hallucination that my house was exploding, as a reaction I jumped out the window to escape the situation, which didn't exist. For people in Solitary Confinement, they cannot jump out of a window, or run away from these hallucinations, leading to a high rate of self-inflected injury and suicide.

Who is outside the cell--the demons vs the humans? How are they the same and how do they differ?

The figures can be considered demons, but they can also be considered spirits. The figures wearing t-shirts are representative of our youth who are drawn into criminality to survive, only to find themselves slaves to the prison industrial complex. In my mind me they are similar in the sense that they both are influencers – but this is in a very abstract sense.

What is the context of the text on the shirts of the youth outside the cell?

The text on the shirt represent two of the original gang sets in Southern California. The Cedar Block Pirus and the Rollin 60 Neighborhood Crips are today considered notorious gangs, but they also have an interesting history of civil rights activity.

Why an outdoor cell? What is the relationship between the sky and the piece?

I choose an outdoor cell because in places like San Quentin people are given ridiculously tiny cages that are meant for recreation. These steel cages are usually only big enough to do basic exercising and usually have some sort of natural light source with the ability to see the sky. The idea that I could be locked in a cage and be looking at something as boundless and free as the sky gave me a deep sense of anxiety that I wanted to present with this piece.

How did you build this piece?

I made this piece using Blend 4 Web, Photoshop, and Daz 3D. Daz and Blend 4 web are both free programs. It's important to me to use platforms that are accessible, things feel more genuine to me that way.

Does the theme of regret function in any way in this piece?

That's an interesting question. Maybe, but not clearly. There's certainly things that I regret that I have done, and I can see how one gets that feeling from this.

Have you ever had an imaginary friend?

I never have, but I was always really close to my brother and sister, and my sister, who is a teacher now, used to have pretend classrooms where I was consistently at the bottom of the class as far as grades and behavior is concerned. Try giving a book report after an imaginary A student to a 7 year old and you'll feel my pain.

Have hallucinations ever played a role in your life other than in the story above?

Do you think we need to live through an experience in order to truly understand it in another human being, or can imagination and empathy be strong enough to provide us with a conception of "what it is like?"

Well, I think if someone super close to you like a lover, or family goes through something, and you are with them every step of the way you have a very clear understanding of what its like to go through whatever the experience is. I also think that when people go through real tragedy they can more easily understand the pain that someone else is going through in that situation. With that being said, at the end of the day, all of us are different and experience everything differently, even if the two of us were put into the hole at the same time in identical cells we would have two unique experiences once you go beyond the surface level.

What under-appreciated artist, gallery, or work do you think people should know about?

I'm a really big fan of POWRPLNT in New York. I love gallery spaces that know how to show amazing art and also reach out to the community. They were teaching kids in Bushwick, Brooklyn how to code video games the day after an opening reception for net art the night before. The most inspiring musicians in my world right now are Hanzand ConRizzle aka Loochey Lovely. When it comes to visual art, especially net art I have to give it up to JAWN BiLLETES. The work on his Instagram page is the kind of mix of ethnic culture and internet art which is really exciting and dope to me.