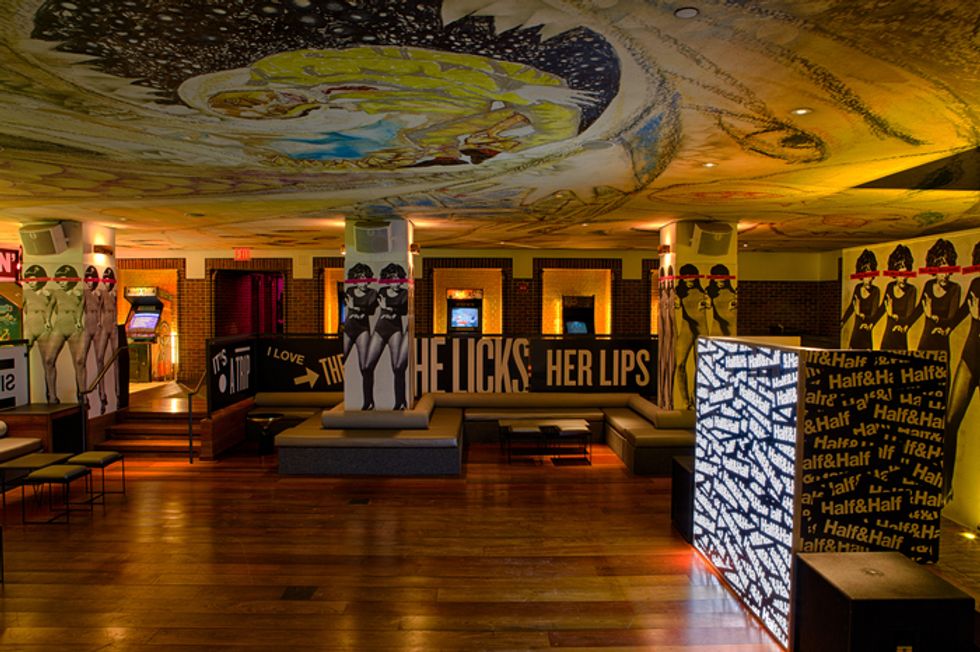 by Kyla Bills
PAPERMAG
Half & Half, located in the Hudson Hotel, is not your typical bar. While the space itself is an '80s inspired dance hall mixed with some nostalgic arcade games, its most unique feature is its constantly evolving design as different artists take over the space. For the next few months, the venue has been taken over by artist Harrison Boyce and his installation entitled "Nostalgia." With a knack for evocative black and white photography, the BMX rider-turned-photographer has done everything from Pusha T music videos to commercial work for brands like Nowness. His installation at Half & Half draws heavily from Boyce's photography aesthetic, with black and white images and graphic lyrics creating an effect that's simultaneously grandiose but not overwhelming; his photos might cause you stop and think but not for so long that you don't throw back a few drinks and play some Pacman. We chatted with the artist about his BMX days, nostalgia and why artists should care about what comes up in a Google image search of their work.

Inside Half & Half
How did you get started in photography?
I grew up in a very artistic house. My mom has a degree in fine art and she ended up balancing between music and art for my entire childhood. She was a radio disk jockey for something like twenty five years and was always very adamant about taking me and my brother to museums. My dad was a musician as well. Aside from that, I got into BMX and I rode a lot and got sponsored and needed someone to document everything. So I just started taking photos. I learned about photography through documenting me and my friends, just traveling all over the world and always having a camera with me. I started a website when I was a teenager documenting the whole scene -- my own little BMX scene -- so I learned how to make websites and learned photoshop. I ended up becoming the art director for the bike company that I was sponsored by and did their website. I always knew that I didn't want to be like in BMX forever but photography and design were skills I could use for the rest of my life.
How do you think your background in BMX translated into your photography?
It's about finding the right moments that really stand out. With BMX -- taking photos of tricks -- you have to time the photo for the trick to be in a perfect spot and it doesn't work a few frames prior and it doesn't work a few frames after -- it's that one sweet spot. With fashion films, I do some of them and they're kind of a weird thing to me in a sense because there's no real reason for them, it's just a bunch of moving images. I think that I always try to always look for those authentic and real moments someone else might overlook.
The majority of your work is shot in black and white. How did you make the decision to use color photography sparingly?
I have a hard time defining a specific look in color. I shot a lot of black and white film when I started out and I did a lot of cross processing and messed with different types of actual film. But when I started shooting digital I had this computer where I could do anything and make the colors any way I wanted to -- it would all just be Photoshop shit and there was no real base behind it. I think because of the amount of options I had, I felt overwhelmed and could never really figure out how to specify a look that I liked. I did it as a challenge to simplify my photography: to focus on framing and images and figure out a direction I wanted to go. And it just kind of stuck.
I remember I use to post stuff on Tumblr and I'd look in the gridview and it was just gross. It didn't make any sense, there was no consistency or cohesive look. I think digitally archiving images in a good way is big now. If somebody goes to search you, they're going to see a curated Google search result and if it's a mess there's no vision.
This work is titled "Nostalgia," how do you think nostalgia factors into your work?
My personal photography has a lot to do with my love for documenting New York in general. I take photos of the city and I want to be able to archive what "now" is so that you can look back in 20 to 30 years and know what today was like. I'm really inspired by photographers who shot in the fifties and sixties and I was always envious of their images and the type of New York that they captured, it always felt like I missed out. Like "I didn't live in this awesome time, how can I take cool photos of old cars and old signs?" But I realized that all they did was take photos of their current time, their everyday. To them it was probably stupid, like how we feel about Times Square right now they probably felt about Times Square back then, but if you look at it thirty years down the road it's way cooler. I don't know if it's nostalgia specifically, but it's sort of timelessness.
What was your process for tackling this project?
I got roped into this because Alan Philips who's the CMO of Morgans Hotel Group had seen this video I did for Pusha T -- it was all these black and white images with type, and he essentially wanted to theme this space off of that video. The video itself was the biggest platform to start off of. From there on it was just trying to find images that were fun and had good energy. I went in some crazy directions -- I had a whole car crash theme and it looked super cool but I didn't know how that would be to sit and drink alcohol in the middle of a bunch of car crashes. I found these dancers in an old Esquire magazine from 1975 and once we found them it was what we built off of.
How did you decide which lyrics to include in the space?
I was digging through stuff and I think I was just listening to a shuffle mix or something like that and a 2Pac song came on and I just typed something -- like four words of it -- and put it in a little graphic and laid it out and sent it to everybody to check out and everybody really gravitated towards the specific song. It was just as random as that.
The Half & Half space is located inside the Hudson New York, 356 W. 58th St., New York. It's open Tues-Thurs, 6:00pm-2:00am and Fri-Sat, 6:00pm-3:00am.
You May Also Like
Music