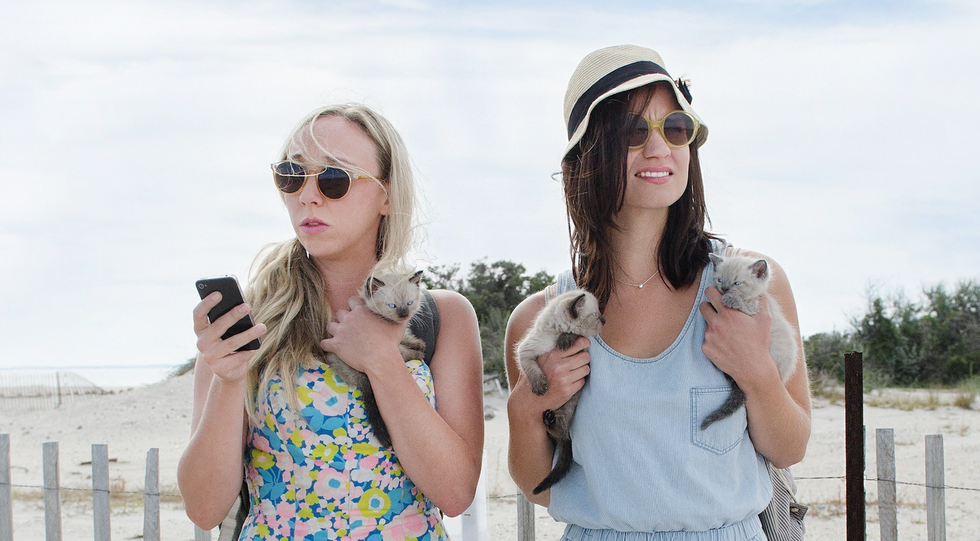 Talking to the Director of Fort Tilden, the Millennial Comedy That's Way Too Uncomfortably Familiar

by Carey O'Donnell
PAPERMAG
With New York millennial parodies practically becoming a tired trope at this point, Fort Tilden arrives as a refreshing reminder that there are still so many things to make fun of Generation Y about. The dark, independent comedy, written and directed by Charles Rogers and Sarah-Violet Bliss, follows two Brooklyn trust-fund hipster girls as they play hooky (from what? we're not sure) on a summer day and head to Fort Tilden beach to pursue some cute bros they met at a terrible party. Their unnecessarily difficult journey to the beach is a hilarious dissection of the familiar, but always shocking, entitlement often displayed by twenty-somethings, while also bringing new, profound commentary to the surface that's so on point, it's hard to watch.

"It's a satire of people's bullshit," Rogers said of his film, which has won accolades from film festivals including the Grand Jury prize at SXSW last year, and has helped the staff land dreams jobs writing for Netflix's Wet Hot American Summer.

Indeed, bullshit runs high with the film's central characters, Harper and Allie (brilliantly played by Bridey Elliott and Clare McNulty), two romper-wearing, Williamsburg roommates/frenemies.
Harper is a self-proclaimed "artist," who spends more time ripping apart other people's passions and hitting her wealthy father up for money than on her own, mediocre paintings. Allie, outwardly more sensitive than Harper, is joining the Peace Corps in Liberia to "do something valuable," which is just an attempt to prove to others (especially Harper) that she's capable of following through with a commitment.

Rogers explains his and Bliss's inspiration for these two ladies, who are mixtures of themselves, as well as "intense artist-types" they encountered in film school at NYU. "It was never our mission to write a social statement," Rogers said. "We just wanted to tell the story as we understood it, with two complicated, funny, and sympathetic characters."

At first glance, it's hard to feel any sympathy for Harper and Allie, who pay $200 (in written check) for a "rustic" barrel surrounded by garbage on the street, complacently watch a kid steal one of their bikes from afar, then leave the other bike they borrowed from a lonely neighbor next to a dumpster in Flatbush to get an Uber. "He must have bad karma and that's why this is happening," Harper suggests while they cover the bike in trash bags to hide it in a glimpse of the total lack of accountability these two display. Allie guiltily dodges phone calls from her Peace Corps officer, Cabiria (Allyson Kaye Daniel), who needs her to finish her induction process. "Cabiria is just too real," Allie says later by way of explanation. The originality of these quips and scenarios (which come off like the worst sound bites you hear on the L Train) is what makes Fort Tilden worth watching. "We were just following our instincts on what felt right," Rogers said of the dialogue.

Harper and Allie aren't the only bad eggs. There's also studly Benji (Peter Vack), Harper's arrogant, Charles Manson-y sex buddy whom she clearly has strong feelings for. Benji surrounds himself with a crew of gays (the amazing Max Jenkins, John Early and Evan Hoyt Thompson) who feed into his ego. "Oh my god, I had a dream that you died!" Max tells Harper, threatened by her presence. Rogers (who is gay himself) humorously observed, "There is an epidemic of straight men who thrive on gay male attention."

Then we meet Marin and Amanda (Desiree Nash, Becky Yamamoto), Allie's Ann Taylor Loft-y friends in Teach For America, whose searing, holier than thou attitudes will give you PTSD from every conversation with someone you went to college with who was accepted into that program.

While the movie skewers Brooklyn youth culture, it also celebrates the vast borough's beautiful, melancholy neighborhoods during the dog days of summer, especially when the duo finally makes it to the alien world of Fort Tilden beach -- the sweeping shots of Manhattan's skyline resting in the distance provide a reminder that you are truly out here.

"You grow up watching You've Got Mail," Roger said, "and have this perception of what New York City is, but that is literally just a 10 block radius; the outer borough is so amazing and weird."

It's there on the desolate beach where Harper and Allie hit rock bottom, discovering that the dudes they came all that way for (the hilarious Griffin Newman, Jeffrey Scaperotta) are actually dorky seniors in high school who arrive in tow with two topless, dreadful teen girls (Hallie Haas, Christine Spang) who just got back from Thailand and write poetry. The dudes even take the molly our heroines bought for the trip without asking. Fuck that shit.

"Don't worry about that woman, she just needs to suffer with herself," one of the ~groovy~ teen girls later tells Allie to comfort her about Cabiria's disappointment in her flakiness. "How do old people buy drugs?" the other girl asks meanwhile as the teens walk off the beach. By the end of the movie, you can't help but feel major kinship with Harper and Allie, exhausted and defeated in a $100 cab back to Williamsburg (paid for with a check, of course.)

These depressing moments in the story, however, didn't faze Rogers. When I asked if he ever felt like he and Bliss were going too far, he said no. "I could've kept going. I feel like the parent of a shitty kid -- despite evidence that they're a monster, I still think they're amazing."

Will we ever get a follow-up to Harper and Allie's misadventures? "Maybe revisit them down the line, when they're going through a mid-life crisis," Rogers said. "But that means I'll have to have one myself first, so we'll see."