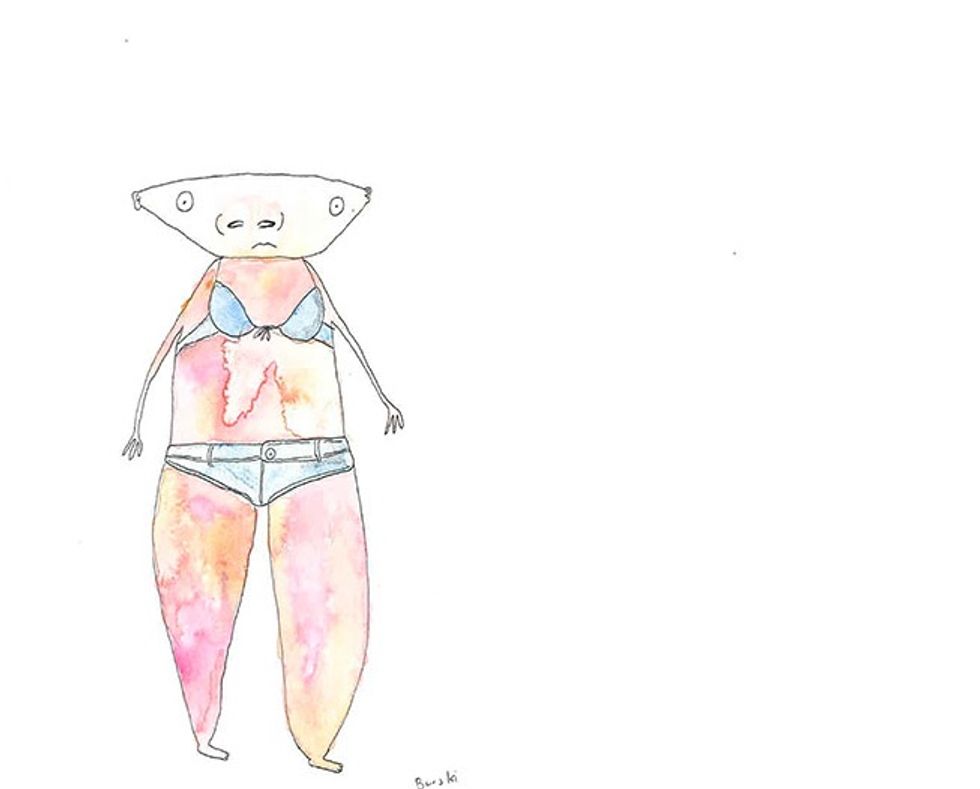 Talking to Tallulah Willis About Her Creature Sketches

by Mickey Boardman
PAPERMAG
VERSACE SUNGLASSES
We must admit we're a little bit in love with Tallulah Willis. The twenty-one year old Aquarius is currently growing back her hair after shaving her head -- a styling choice that did nothing to diminish her adorableness. She's been drawing for about a year and her creatures might not be traditionally cute in the Disney sense but we think they're gorgeous. As summer fades into the past and temperatures cool we thought it would be fun to have Tallulah draw some beach creatures featuring some cute swimwear.
When did you start drawing?

Roughly a little less then a year ago. I was newly sober and had just settled back into home life after treatment and found myself desiring isolation above anything else. It started as something to release a bit of the swirling plethora of emotions that were rapidly speeding through my mind on a daily basis. Through those first few sketches I found my first generation of creatures. I wanted to make the friends that could cure my current lonely insides. I found a sense of calm taking two-dimensional lines on paper and injecting energy and life into them. They became extensions of me as well as harboring unique and individual personalities of their own.

LISA MARIE FERNANDEZ
T BY ALEXANDER WANG & LA PERLA
How would you describe your drawing style?

I think my style is heavily based around exaggerated proportions. Humongous eyes with teeny noses, eggplant shaped torsos with potbellies and thin tree-toed appendages sprouting off. It's really important to me to convey a specific feeling plainly in the face or body language of each creature. I hope to achieve this through sparse but thoughtful bold lines in lieu of shading or too much detailing.
ZIMMERMANN
MARA HOFFMAN
Have your 'creatures' evolved and how did you develop that look for them?

The creatures began with a heartier range of accessories -- some with a nod to a more alien goddess motif, with alchemical symbols on their heads, some pulling inspiration from deeper within the animal kingdom. After getting frustrated because I couldn't accurately recreate a salamander's body type with the precision I deemed necessary, I realized I had to let go and stop trying to make them perfect. After that I put pen to paper and allowed each of my new friends to grow and take form without placing judgement. Of course in the end some would need an extra nipple here or there, or some lines rooted from a corner of the eyes to show exhaustion or pensiveness. But really I feel like I am just the vessel to introduce these guys to the rest of the world.
GUESS
You May Also Like
Beauty