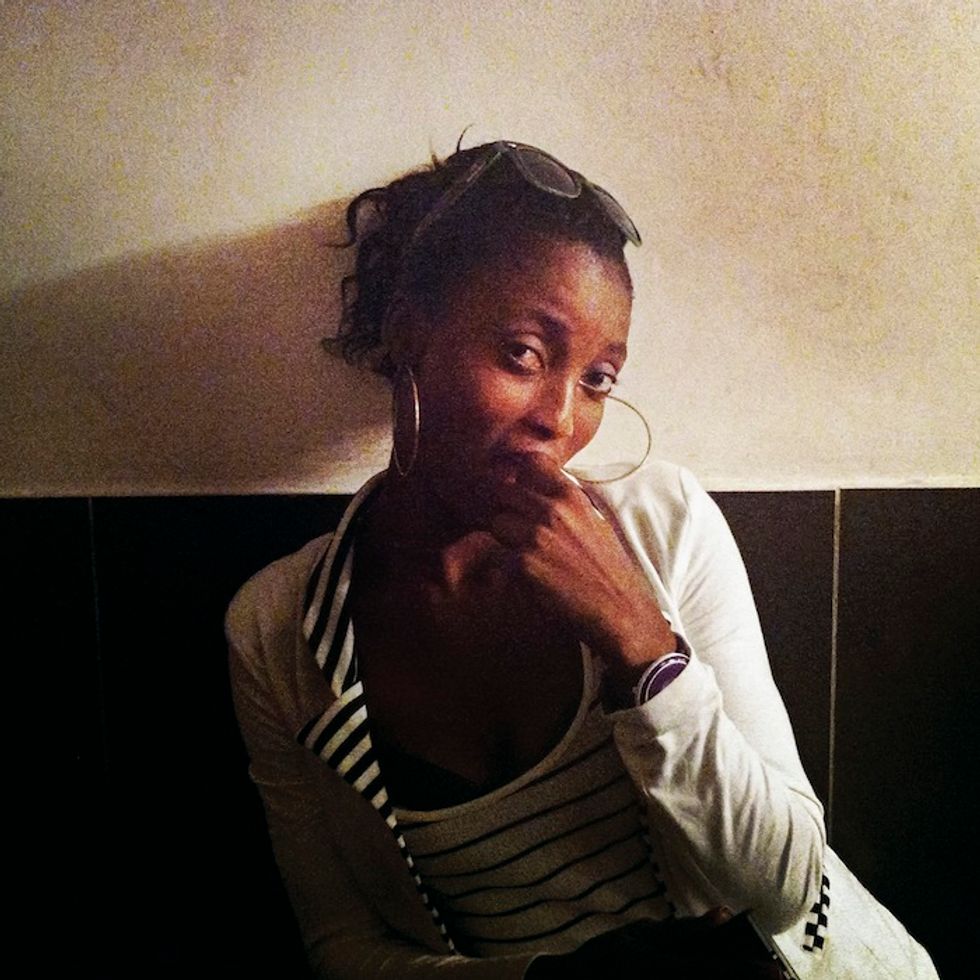 by Kurt McVey
PAPERMAG
Yapci Ramos. [Photo by Shane LaVancher]
Artist Yapci Ramos likes to go deep -- into her subject matter that is. For her September 12th show at Catinca Tabacaru Gallery titled Perras y Putas, the Spanish photographer will be exhibiting seventeen photographs that chronicle her up close and personal experiences with prostitutes from her home town of Tenerife in the Canary Islands, where she first began shooting the "mujeres de la vida" back in 2010 along with similar images she took in the heart of the Congo, and, most recently, Aruba, where the artist discovered the stark parallels between these women of the night and the derided stray dogs (also featured) that wander the streets of the small Caribbean island with nothing but their raw survival instincts to guide them.

"Rosi y Mari," from the Mujeres de la Vida series, Tenerife, Canary Islands, 2010.
Tabacaru's modest-sized gallery on the Lower East Side, which was recently painted a deep shade of "Congo Green" to serve as a fitting backdrop for Ramos's rich, intercontinental portraits, has made a name for itself as a risk-taking space with a global perspective while simultaneously bucking art world trends, traits its namesake owner says both she and the gallery itself share with Ramos -- and rightfully so. Tabacaru, formerly a human rights attorney for the UN, was briefly arrested in the Congo in 2006 after working at the Rwanda Tribunal in Tanzania, presumably for photographing a government building without permission. This August, the young art dealer returned to Africa for an ambitious, month-long cross-cultural artist residency program in Harare, Zimbabwe, which merged three of her most promising young roster artists (Xavier Robles de Medina, Rachel Monosov, Justin Orvis Steimer) with Africa's most talented and controversial artists (Kudzanai Chiurai, Terrence Musekiwa, Admire Kamudzengerere), the creative fruits of which are on track for a group exhibition in April, 2016 at The National Gallery of Zimbabwe.

In a New York art bubble that still seems to be dominated by the work of white male artists, Ramos' exhibit featuring thought-provoking humanist portraits of disenfranchised women, and displayed in a gallery run by women, glimmers like a diamond in the rough. We caught up with the artist in Tabacaru's Upper West Side apartment, where she was crashing while her relentless (and apparently jet-lag immune) gallerist was making moves at Art International-Istanbul. Take a look at photos from the show ahead of its opening tonight and read Ramos' thoughts on her subjects, responsibility as an artist and what she hopes will happen to her photographs.

"Perra 3" from the Perras series, Aruba, Netherlands Antilles, 2012
Have you shown in New York before?

I've shown a few pieces in NY for a pop up show with Catinca ("Conventional Codes," 2012) but this is my first solo show with her.

Do you consider yourself to be a photojournalist as much as an artist?

I am an artist first and last. I like to have a conversation with the place, the town, and the city. I normally go deep to the people I meet. So deep, I sometimes feel like I move through people, and take some of them with me. I explore personal space, and proximity. I like to show them as who they are exactly, without judgment.

What specific cities are featured in Perras y Putas?

I've shot in Mali, and Guatemala but for this show, there are just three points of view: Tenerife, a village in the Canary Islands, which are off the coast of Morocco, where I grew up. It's Spanish, but more African in a lot of ways. Also, there are women from the Congo and Aruba.

"Stella," from the No Stress Bar series, Brazzaville, Republic of the Congo, 2014
When did you first become fascinated by prostitution as a subject?

In a workshop in a home or center or, how you say, a clinic for disenfranchised women -- this was 2009 and into 2010 -- I developed a personal relationship with one woman in particular during a month and a half workshop. With prostitution, it's the same idea in different places, but the people, they are always different.

Are their circumstances so different?

It is true -- most of these women go into prostitution because they have babies and no money. They're desperate. Maybe they're drug addicts, but they each have a unique story to tell. I like to think I shoot them all with dignity.

Have there ever been moments when your interactions got too personal?

Not really, but it's more like tense moments. I was alone with an older woman in her home and she had to rush me out because her son, an addict with a restraining order against him, was on his way over. That was a little scary.

Do you ever feel a responsibility to help these women?

Of course, but I'm not doing social work, I'm doing artistic work. It's extremely difficult to pull these women out of their world.

You previously mentioned that in the Congo, Western men and wealthier African men actually visit to find and essentially buy these women out of their situations.

I was in the Congo for a project and I went to one of the nicer bars and saw women preening themselves in the bathroom in order to be presentable for Western men looking to pull the girls out of "the life."

"Chantalle," from the No Stress Bar series, Brazzaville, Republic of the Congo, 2014
How do you approach these women? Are they ever defensive?

No. They want the attention. They want someone to listen to them. In Aruba I actually paid for their time. I know how to make them comfortable. This is my personality. It's one of my talents.

What brought you to Aruba?

I was there for The First Biennale Encounter of Contemporary Art (2012), which coincided with a 3-week artist residency program. It was there I saw the similarities between how the dogs and women were treated. Men would drive up and flash their headlights at the prostitutes on the street, to let them know they're interested. So I chose to do the same with the dogs.

Where do you see these photos living?

I think when you buy these photos as artwork, you forget they're prostitutes. If you're a good collector, you're viewing it as a piece of art and as a portrait of a real human being.

Is enough effort being made to help these women?

It's part of the reality, unfortunately. I don't know if it will ever change. I want everyone who comes to this show to see these women as people. Society treats them like dogs.

What reaction are you expecting or hoping for when people visit the gallery and see this work?

I can explain the stories behind the people or why I went to their countries and cities, but I can't explain how these photos are going to make you feel, or why. I'm not going to have the last word, and even if I could, I don't want it.