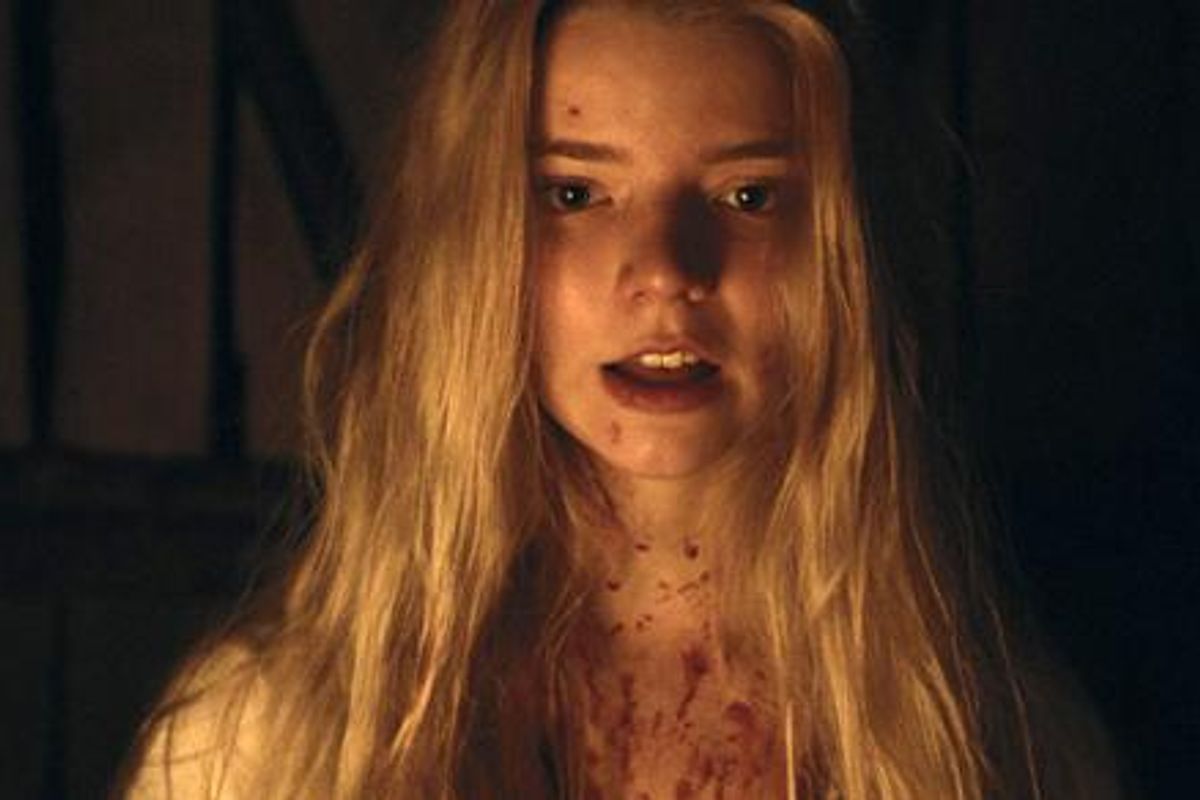 Talking Shop With Anya Taylor-Joy, Breakout Star of 'The Witch'

It's rare that a movie these days has the power to truly terrify—with so much real-life horror happening every day, it feels like we've become accustomed to it. We've grown into unnatural terror in the past few decades like an evolutionary adaptation.

So when a film like The Witch comes along—a story with such palpable horror and brutality—it's a big deal.

The indie movie (which won the Directing Award in the U.S. Dramatic Category at Sundance), has received universal acclaim from critics.

The story centers on a 17th century family that's moved alone to an uncharted area on the edge of the New England wilderness; they've willingly left their Puritan plantation over a religious disagreement.

Self-righteous patriarch William, with his wife Katherine, and their children: daughter Tomasin, son Caleb, twins Mercy and Jonas, and infant son Sam, in tow, is eager to start a fresh on this new unscathed and blessed farmland.

Things soon worsen after the baffling disappearance of baby Sam, and the family becomes convinced of an evil presence lurking in the woods, just outside their property; an evil that soon infects inward, with the blame falling on Thomasin.

Though the setting is nearly 400 years ago, The Witch's writer and director, Robert Eggers, taps into the same violence, repression/oppression, and paranoia that is in the very DNA of our country (and most countries around the world); we were born out of this ignorance and bloodshed—something that continues today.

The Witch, which is in theaters nationwide as of last night, is truly a horror movie of the present, while reveling in the past.

Its breakout star, 19-year-old Anya Taylor-Joy, is a revelation on screen.

Her gut-wrenching, naturalistic performance of Thomasin has her poised as one of the top rising young stars in the game, with lead roles in buzzed about projects from M. Night Shyamalan, and alongside Kate Mara in upcoming sci-fi movie Morgan (directed by Ridley Scott's son, Luke).

PAPER caught up with Anya to discuss the intense experience making this movie, her love of Thomasin, roles for young women in Hollywood, and the daunting reality of rising stardom.

We can say we chatted with her when.

Just from the terrifying content alone, did you have any reservations about the script—and especially when you got the role?

What you just said is probably the intelligent reaction to approaching the script, but I'm a very instinctual person, and I don't really rationalize thing.

I'd only been acting for a short amount of time, and I hadn't read many scripts, so I just went into it fully.

I will say, though, that the feeling I got when I read the script is a feeling I will be chasing in future roles for the rest of my life.

Just in general, I always read scripts the night before the audition, and I learn the lines 10-15 minutes before, just to keep it fresh.

But when I read The Witch, it was late at night, in my bed, alone—which was very smart!

I turned the final page, and I swear my body collapsed on me and I inverted. I felt like ghost hands had strangled me with this overwhelming sense of fear and anxiety that I didn't understand.

On my way to the audition I remember calling my mom and asking her, "Why am I so nervous about this?"

Was it hard getting used to the dialogue?

After page one, I never questioned that the dialogue was in Jacobean English; it didn't seem odd. Obviously because of when it was set, but it was so lyrical and poetic and beautiful—it had a rhythm to it.

As unnerving as this film is, hearing our characters speak is semi-soothing, the cadence was almost like a Fairytale or nursery rhyme.

The movie was filmed in the wilderness (Canada, though it's set in New England.) What was the hardest thing about filming?

We had a week of rehearsals that was unbelievably important. Rob picked very good cast of people, very intelligently, because the second we all met, it was like, 'Let's skip the awkward stage of not knowing each other, and go right to being friends forever.'

We loved each other instantly. And you need that support when you're literally out in the middle of nowhere, no connection to our real lives or support network; we became each other's support network.

The atmosphere on set was remarkably light because of this bond we had.

We're still tight, I was in Venice recently living in a one-bedroom apartment recently, and the five of them all stayed with me; we're intensely close now.

The wardrobe was immaculate, and looked painful. What was it like wearing those restrictive outfits?

The wardrobe was done with such incredible period accuracy; it changes the way that you move, eat, walk, and stand.

The first time I put on my costume, I thought, 'How did women dress themselves?!' I needed three people to help me.

By the end of filming, though, I could dress myself in a few minutes.

But really, with the clothes back then, your arms and legs could move in only one direction; it was like Barbie stewardess (motions with stiff, locked arms).

The Puritanical mindset was to go against everything that makes you human—even your clothes. They had children in these outfits—children who were meant to move and be free.

It was training them from a young age to not be human.

Thomasin questioned this more than most; she saw the "Why?"

What was your mission with portraying Thomasin?

I love my character. All of my characters feel real for me and I deeply care—probably too much—about doing right by them, and giving them a voice.

Something that made me so empathetic toward Thomasin was her burgeoning sexuality. Sexuality is something that everyone fears so much, and especially in the 17th century, when they didn't talk about it.

So Thomasin's awareness of her body and her feelings made her a threat?

Kids today are fortunate to have the explanation of, "Oh, honey, it's just puberty," when they're going through weird things.

For Thomasin, she didn't have that, and was dealing with these hormones and self-awareness, and becoming more vocal.

In the story, that threatens her family; they start to not trust her, and fear her.

I thought what that would be like: you don't understand what's happening, either. So back then, what kind of position what that put you in? What would your frame of mind be?

Do you feel there's an overt feminist statement in the script?

When Rob (Eggers) wrote this, he didn't set out to make anything other than a Puritanical horror movie.

When you read the script, however, feminism just jumps off the page—it's just natural.

It's not only in the script, but the documented accounts during this time period.

People feared outspoken women—accusing them of witchcraft wasn't just a means of shutting down women who stood up for themselves.

For these people, witches were real, and they were an amalgamation of all these concepts of femininity that both men and women feared.
It turned these accused women into fairytale ogresses.

Though your acting has been universally praised, what's been the most frustrating thing you get asked by the press?

When I get asked if I'm "struggling to find another role this good." Am I just getting girlfriend roles? Hot girl #1?

Every single script that I have read is for a gritty, flawed, human being who happens to be a woman and owns it. But I should not be an anomaly. I should not be strange for getting these roles; they're out there.

Every girl should have this opportunity.

People like to put things in boxes, and with actresses, it's like "So, what's her type?" "Is she a virgin, or is she a whore"

We're all human beings; none of us are one thing; we are very complicated and it doesn't change according to gender

Does it ever feel daunting to be on this cusp of stardom?

I was in very deep denial about it for a while, and it got exhausting to pretend like something big was happening in my life. The most important thing that will always save me is that I would be acting if no one ever saw one of my movies. I can't not act, I love the work too much; the work is all that matters.

Unfortunately, I'm a very private person and not into this idea of "celebrity," but the attention does allow you to work with people you've always wanted to work with, and tell the stories you want to tell; movies you want to make. The pros far outweigh the cons for me.

I'm the luckiest girl, and I will never complain about any of this because it's a dream come true.