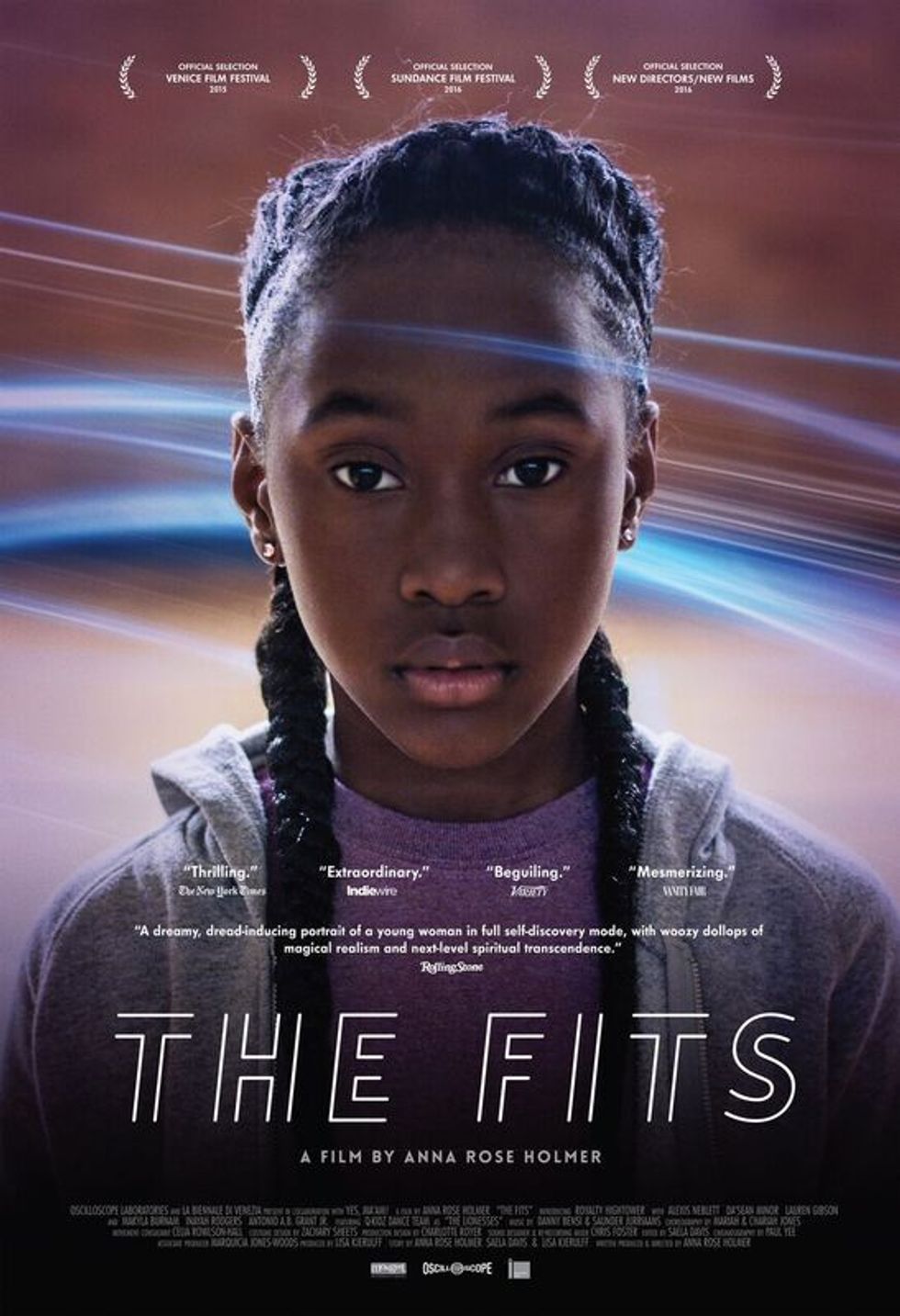 "Community without conformity" is the central thrust of Anna Rose Holmer's critically-acclaimed Sundance entry The Fits, an appropriate study of identity as it transforms on the cusp of adolescence.


Starring first-time actress Royalty Hightower as Toni, who spends most of her time in Cincinnati with her brother at the community center boxing gym, until she eventually tries out for the center's dance drill team. Going from boxing gym to dance team creates a tension between Toni's tomboy, boxing-self and the side of her who wanted to pop, lock and drop -- however, she soon finds that she does not have to sacrifice any part of her identity in order to actually "fit in".


And while the title of the movie could be perceived as a cheeky pun on "fitting in," it's more directly related to a series of seizure-like fits that certain members of the dance team experience consecutively. During the writing of the film, Holmer was inspired by her research in historical cases of conversion disorder, which causes patients to experience neurological symptoms, in response to stressful situations. While the characters were experiencing the same thing, they were experiencing them in different manners; some violent and some "serene," as one describes -- thereby continuing to emphasize the film's ubiquitous essence of individualism within collectiveness.

PAPER spoke to both Hightower and Holmer to discuss Holmer's inspiration for the film, working with a cast of first-time actors, and Hightower's potential future as Beyoncé's successor.

Where did the inspiration for this film come from? What made you choose dance and "the fits" as the vehicles to drive the message of the film?

Anna Rose Holmer: [When I first started thinking about the film], I was looking at the patterns and thinking about creating a dance film around those patterns that I saw -- unconscious movements as choreography. In regards to finding a dance form, we looked for a really long time; about a year before discovering the Q-Kidz on Youtube. We had to adapt our story idea to their dance form and write with them in mind. Drill was such an explosive narrative, which was perfect for the film. It grew naturally as we looked for the right dance form. We wanted to cast all the kids from the same dance team.

What made you decide to cast dancers rather than actors for the film? Did you have any concerns about this?


ARH: We always really wanted to work with a real dance team and to approach all of the narrative elements of the film through movement. We felt that dancers were the perfect collaborators in that sense. We worked with three dance coaches, two of which are the actual coaches of the Q-Kidz. The boxers are also real boxers who compete at the Junior Olympic level. Being a professional athlete really emphasized the importance of movement that we wanted to capture in the film.

To what extent were the dancers playing themselves? Since the role was so close to home, how hard was it for Royalty to play an entirely new person with her same dance team?


ARH: There were a couple hundred girls on Q-Kidz and we only casted 45 of them. Royalty has been with them since she was 6. The kids were very involved and collaborated in writing their own dialogue. They are acting; these characters existed and we did collaborate and workshop for about 6 weeks before we started shooting. Toni is actually a big departure from who Royalty is. She's stepping into that role and dancers really understand playing roles and performing as other people.


So Royalty, can you identify a few major differences between you and Toni?

Royalty Hightower: I would say I don't really like boxing. The practice was fun and a good experience; I just don't like the exercises and drills. They're way harder than dancing. Also, Toni didn't know how to dance, but I already know how to dance. It was really weird to be taught how to do a movement the wrong way. It was really awkward.

I felt as though the boys and the girls in the film were deliberately separated; can you discuss a little the structure of gender within the film?

ARH: Yeah, we made an almost exaggerated gender space so that there is this boy's world and girl's world that are really defined. And Toni is the one that is able to permeate [the space] between the two. Nothing changes within Toni, but the scenes change and who she is in the girls space is really different from who is she in the boys' space.

There's this false idea that she needs to choose; which is a more traditional approach to this dilemma. But what we tried to show in the film is that Toni characterizes both. There is a more fluid approach to gender. We took language from boxing and dancing and she carries both -- she is strong and graceful. It's not a contradiction.

Royalty, I read that you have always wanted to become an actress. What initiated your interest in the entertainment industry?

RH: When I was little, my grandma used to always watch Beyoncé and that's what really sparked it. It just looked so fun! She's energetic and gets to wear cute clothes, cute heels and dance in front of millions of people. I want to do that. No singing though.

I think an important point to the film is the idea of community without conformity. What more could you say about this, Anna?


ARH: In the last phrase of the script, what we say, in the context of the group, is "each girl is her best self". You don't need to erase who you are. There's so much power in community, but not conformity. What that means is that you can risk more as an individual than when you can lean on a team like that. Toni fears that she needs to give something up.

In what ways did you feel you had more independence as a director than those who work with larger studios and have to deal with investors and producers?

ARH: Well we were completely funded by nonprofits. It was challenging, but we had a lot of freedom to explore the art form and experiment; but also make choices like shooting in Cincinnati and filming with 45 girls. It didn't have to be vetted in a traditional financial structure. We were able to risk more and gain more because of that freedom. Our supporters were always about supporting us as artists first. The community support also had the same tone; we were working with community-minded organizations throughout the whole process.

Royalty, word on the street is that you've been getting calls for auditions and meetings with Fox and Paramount; how do you feel about all of the attention and recognition? Anything you can spill about your future?

RH: I'm really excited and thankful and grateful. This was a once in a lifetime thing; once you do that one thing, you'll probably never get a chance like that again. And everybody knows you after that. My life was just flipped around! In my future, I definitely know I'm going to keep acting. And I want to move the Q-Kidz with me to LA. I'm going to have a big house and two dogs.

And Anna, the next stop for you?

ARH: Yeah, you know, just like Royalty said, kind of in awe and taking some time to be really grateful about how this film is doing. And then trying to get to film two and writing again with my co-writers in this film, Saela Davis and Lisa Kjerulff. And just being excited doing it all over again.

How have you guys celebrated the success of your film!?

ARH: How have we celebrated Royalty?

RH: It's been so busy, I don't think we've had a chance to celebrate yet.

ARH: We're going to have a red carpet premiere with the whole team in Cincinnati this weekend. We've had some pretty mini celebrations. The Sundance and Venice Film Festivals were really special.

To wrap things up, I'm going to ask you to finish this sentence: The purpose of this film is to …

RH: The purpose of 'The Fits' is just to show that you don't have to give up anything or give up your own self or become somebody you're not to fit in with a group. You can be your own self within a group.

ARH: The purpose of 'The Fits' is to celebrate the joy and freedom of moving; and kind of giving up control to access this other kind of more subconscious power of dance.


You can check out the film's screening schedule HERE and its in-theatre release dates HERE.