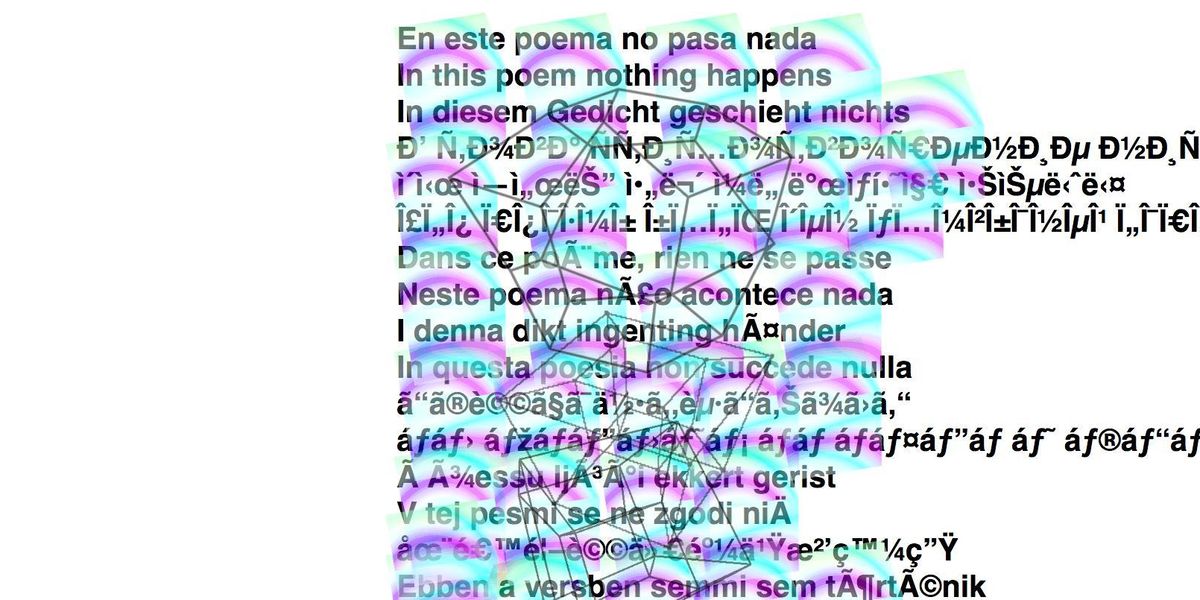 Take Down the Labels and Expand: Horacio Warpola and Canek Zapata in Conversation

Canek Zapata (1985) is a post-internet artist and writer who lives in Mexico City, and loves glitch and surfing the web. He studied Classical Studies at UNAM and has a fellowship at Fundación para las Letras Mexicana to write poetry. He is currently working on a project about interfaces, surveillance and random literature, and poems about metamorphosis, pareidolia and memory.

Warpola and Zapata spoke with one another about Mexico's net art world, the tyranny of the programmer and poetry without words.

Canek Zapata: Do you see appropriation as a danger to creativity?

Horacio Warpola: Only the shady ones of copyrights see appropriation as a danger. All the world -- and the arts [especially] -- are an immense appropriation. All creative exercise starts when you appropriate something. What GIF file would you bring to a desert island?

CZ: Living on a desert island is pretty much like living in a GIF. It's repetition and loop. The GIF is all around, present in our daily relationships, because of its capacity to imitate the repetitiveness of the world -- its social relationships and real powers. I don't like to think that we live in the age of GIF, but that the GIF is only a manifestation of the link between visual language, pop culture, and our fascination with silent gestures. We can think about the GIF as a medium that speaks more than a thousand words, but it's much more than that: it's the gesture, the power of gesture, that can spread the emotive language to unknown places (the kind of places that literature's language only can infer in abstract ways) where the semantic fields are new. We are beginning to catch the new ways of meanings. Tell us about your interest in old anatomy manuals and the Tarot.


A-8 RH* by Horacio Warpola

HW: I started with Marseilles's Tarot a years ago when I read Papus and Crowley. The other lecture that took me there in depth was Jung and Sally Nichols' Tarot. The Tarot, without an esoteric sense, is a marvelous force to bring out your archetypes. I always felt attracted to the anatomic illustration and XIX Century manuals. When I began with NewHive I found a way to intertwine it and create something to remember the great artists and researchers who make those kind of works. If programming is the new poetry, is the programmer the new poet?

CZ: The new poet is the person who performs poetry, so that is the program. There is a hypothesis in new media that the aspiration of new media art is in the videogame. There are now literary videogames, but it's only the beginning, and we are starting to feeling comfortable with that kind of language exploration. I don't believe that the physical support of the book will become obsolete, but I do think that new media has opened a new kind of literature, a new kind of language, where the limit is unknown. But for that, we need a new approach to language, a language that we know very little about, a language that will live more in interactivity and reception. There is a warning for that kind of risk, as Manovic had told us so many times, that interactivity is tyrannical, so we need to start talking about the tyranny of the programer. New media art needs to have freedom apart from the programmer who determines our readings. Tell us about Ulises Carrión.

HW: Ulises Carrión is one of my biggest influences. I believe he was a visionary in the field of book-making, editorial curation, and poetry. Now there is a boom with his works, which is natural because his works are so fresh. I believe that poetry needs to be read outside of books. Where do you think it's possible to take poetry, or where do you like to bring poetry?

CZ: If we put limits on the poetic, then poetry will die. I don't really know where we are walking, because poetry is always looking for new roads, and always trespassing the limits of our understanding. Poetry is always looking for the unseen, with but a lamp, so I think that poetry, in its long journey to explore the unknown, will be looking to new frontiers and new mediums, to find out the islands of new meanings. In your last NewhHves you were doing visual poetry. Can you tell us about it?

HW: I think that visual poetry and concrete poetry are the line that we need to trespass to do Expanded Poetry. From Apollinaire's Calligrams we can see that poetry can go far away from the text and mingle with visuals. In the case of NewHive, I have taken it to the GIF, text with movement, as Apollinaire would like. After GIF, what is next?

CZ: Learn to program. In the future it'll become the new literacy because it's only language. For me, I need to look to new ways to explore my poetry works and my visuals and find a way where they both collide and take new forms. But it'll take time. Is there poetry without words?

HW: Without a doubt. Writing is only one of the tools of the poet. The poet is multidisciplinary, he or she can go outside the book, and feel comfortable in so many new ways and platforms. It would seem that poets are afraid of it, but I feel the poet more as an artist than a writer. What's going on in Mexico's digital art world?

CZ: It's emerging. Mexico needs to find a way to step into the 21st century and let more people access the digital world. Now, the public is not confined to a city or a nation, and that opens a new kind of thinking, because frontiers are scattered and it is only in the physical world that frontiers have a meaning -- in the way of visas. But in the digital, the world is already shrinking.

NewHive: You published poetry in books and also in electronic literature mediums. What next?

HW: I believe we have to stop looking to publishing. There have been 100 years since Dadaism and we still hang in with traditional publishing models. I don't say that traditional publishing will disappear, I only say that the poet needs to explore the possibility that technology opens and goes further. Nobody goes to the bookstore to buy poetry books, only the poets, and, instead, millions use the Internet looking for poetry. Will post-Internet die in the same way as postmodernism?

CZ: Without a doubt. It is probably already dead, and we need to talk about the post-post-Internet as we talk about post-conceptualism (I use Felix Bernstein's meaning for that). But I don't find that interesting when the criticism is made a posterior. What we know, and I have a lot of curiosity, is what kind of effect we have on our unconscious as individuals and society with the new technology, social networks and almost-instant communication. We are just starting to learn how the new technology is changing our minds.There is a critic that say that poetry is becoming a visual art, do you think that is right?

HW: Maybe the true quest for poetry is to take down the labels and expand itself.