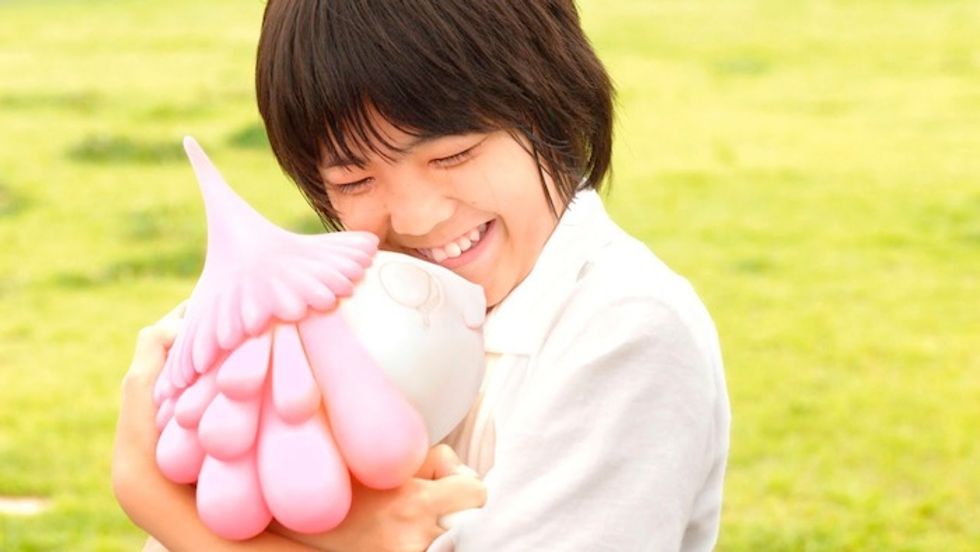 By Sandra Song
PAPERMAG
Known to most as the father of post-modern art movement Superflat, it took Japanese artist Takashi Murakami almost 10 years to make the leap from illustration-based art to making full-length motion pictures, but he did it in 2013 with his debut film Jellyfish Eyes.
Finally screening in select American theaters, it's a fantastical, creepy-kawaii children's flick that is equal parts delightful and unsettling -- a uniquely Murakami film that takes a strangely colorful view of a post-Fukushima world where anything is possible. The movie centers on a young boy named Masashi who befriends a flying jellyfish-esque creature named Kurage-bo, and who discovers that the town he just moved to isn't quite what it seems. Below, we chat with the legendary artist about everything from horror movies to government conspiracies.
You're one of the biggest creative names in art.  Why did you want to transition to film and why right now?

I always wanted to make films, but I didn't have a chance to meet with the right people. Making films also cost a lot, but now I'm getting to the point where I can actually manage that budget. I'm finally getting to work on what I wanted to do.
There are so many fantastical, dreamlike elements to the story that make it feel like a cartoon. Is there a particular reason why you chose to do a live-action film with computer effects rather than just a normal animation?
I actually wanted to make this an animation initially, but I met the director [Yoshihiro] Nishimura and he's the one who said, "I can make the live-action film on a low budget." And the Jellyfish Eyes project is something I had been working on for more than ten years in animation, so I didn't intend for it to be live action. But we had to start filming right away and we couldn't come up with any new stories from scratch, because I had been thinking about Jellyfish Eyes for so many years. So that's why I ended up using this idea for live action and not animation.
Why did you choose to have Nishimura, who predominantly works in horror, produce this children's film for you?
Mr. Nishimura is actually a very, very kind, big-hearted person. He helps out people like [actor] Shion Sono who want to want to try directing. But of course, he is quintessentially known for filming things like Tokyo Gore Police. However, for a children's film like this, he casts people appropriate for children's films. And plus when it started becoming more like a horror film, we worked in editing on making things cuter, adding scenes of nature, shooting more natural scenes and adding more and more things that are not of his taste.
This is the beginning of a trilogy, right? Why did you choose to tell this story in three parts?
The original idea I had for Jellyfish Eyes was actually a TV series with maybe 20 episodes or so -- so it was a much longer story. In order to condense it into a film format I had to have more space and time to tell the story.
I read that you want this film to be a way of showing the younger generation that they have the power to change the system. Can you elaborate on that further?
So for example, Masashi's uncle in the movie is a researcher employed by the government and he is sort of watching over the villains -- they are trying to come up with a new energy using new science and magic and all that for Japan. However, if you really look at him, he doesn't do anything throughout the movie, he just tells children to do stuff and then leaves it to them. [At one point in the movie] when a monster comes out, he picks the kid hacker and tells him he is the the only one who can fight him. He then leaves the child there and runs away himself. That's an example, but all the adults in the film are like that. The school teacher can't stop the bullying, the parents are actually hitting their own children, and so I was trying to emphasize that the adults are useless and that they don't have any power. Even so, the message is that the children need to find their own way and they need to go forward. It's not a clear message, it's more of a mood. It could seem that it's fine and they are just playing games and such, but it shows that even if you are really young you have to think for yourself.
There seem to be a lot of different influences at play here as well -- from cult films to anime, what directors would you say inspired you the most during the making of Jellyfish Eyes?
I am mostly inspired by '70s Japanese TV series like Ultra by Eiji Tsuburaya and also the 80s Spielberg.
You're most known for elevating lowbrow culture, playing with ideas of commodification and mass production. How does that play into the making of a 7 million dollar film?
The two things may not actually reconcile or fit with each other, because I feel like my work as an artist is one thing and that this film is something else. I'm here interviewing with you as the film director, but I feel really timid and shrunken, because I'm like, "This is my first film, I'm sorry!" But if i'm being interviewed as an artist, I would say this "this new theme is this, and the context is this, and it's historically important because of this and that's why this work has a meaning." But I can't do that with a film.

Jellyfish Eyes is in select theaters now.
You May Also Like
Music