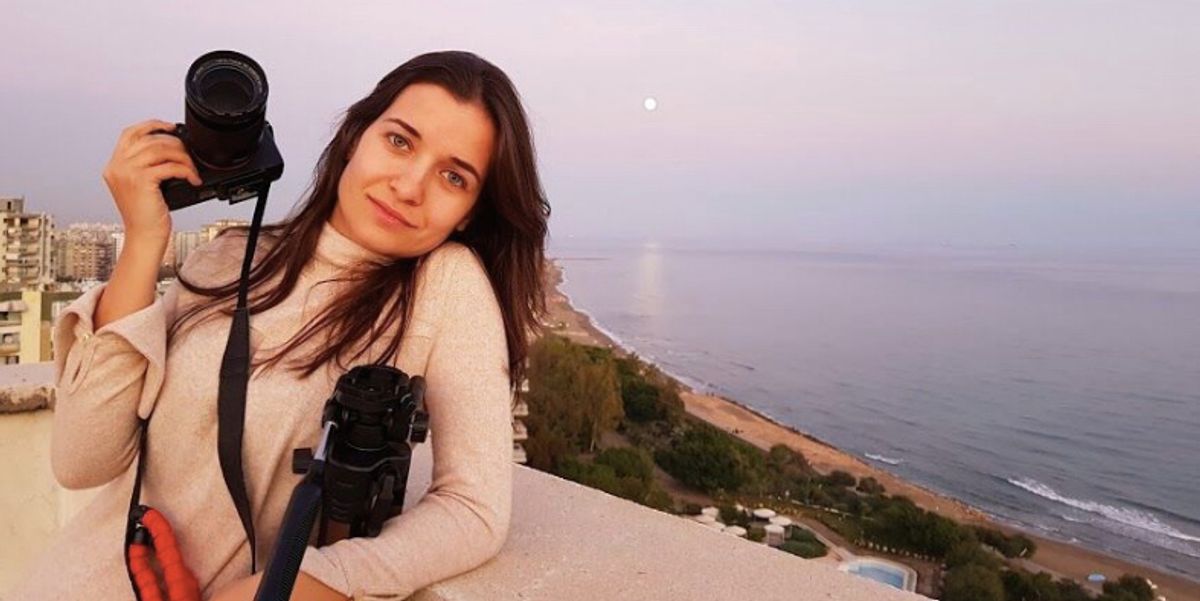 The Syrian Conflict Through the Eyes of a Young Mother

Film today is an immersive experience, using the latest CGI technology to take you to a jungle where animals can sing or a world where superheroes are real. It aims to transport you. But even when a film — like a dystopian thriller or horror movie — takes you somewhere that makes you uneasy, you leave the theater able to reconcile what you saw with your reality.

For Sama, a documentary shot over five years in Aleppo, Syria, takes you to the war-torn region and doesn't let you leave.

The film pieces together footage from then 26 year-old Waad al-Kateab, a citizen journalist, who named the film for her daughter, Sama. Through constant air strikes and chemical attacks, Waad raises Sama with her husband Hamza al-Kateab, a doctor who builds and manages what ends up the only hospital in Aleppo.

Waad's footage provides an unflinching look at the reality of the conflict that catalyzed the refugee crisis we hear so much about today. Shot on the streets and in the hospital, Waad doesn't shy away from showing casualties. We're introduced to hospital workers who are quickly killed. We see a young boy carrying his dead brother into the hospital while saying, in shock, that he was only playing outside.

Related | Trans Women Are Refugees, Too

The film is especially focused on the children affected by Bassar al-Assad and Russia's attacks. As it goes on, you realize that the only thing more horrifying than children sobbing, is children who have been so immersed in terror and violence that they don't react to it — continuing to play through an air strike or looking at a dead body with wide, but tearless, eyes.

As much as those scenes test your faith in humanity, there are moments that provide hope: a baby delivered from an injured woman by c-section, miraculously coming back from the dead; a mother who finds incredible joy in a single persimmon fruit her husband gifts her — their first fresh produce in weeks. For Sama is effectively a story about the human spirit, about people who will do anything for freedom. And it's made more powerful through the lens of a woman who sacrifices everything for that cause.

Watching For Sama felt like a punch to the gut, and two weeks after I attended its screening, I'm still trying to catch my breath.

After taking home the awards for Best Doc at Cannes and SXSW, For Sama premieres in New York and Los Angeles on July 26. It will reach a wider audience when it debuts on FRONTLINE on PBS this fall.

A brief conversation with the film's directors Waad Al-Kateab and Edward Watts, as well as Waad's' husband Hamza al-Kateab follows.

The film ends in 2016. What's happening in Syria today?

Wadd: What we showed three years ago is still happening. It's happening in a place called Idlib in the west of Syria, where tons of people who were displaced from places like Aleppo are living. There are more than three million civilians sleeping there, and it's their last chance to be out the regime control.

Hamza: And in Idlib, everything is happening all over again: city-wide shootings and chemical attacks. But this time, there's no other place to go.

There are many misconceptions by Americans about the conflict in Syria, but one is that everything is driven by ISIS. The film primarily focuses on Bashar al-Assad and Russia. ISIS is only mentioned once or twice. Tell me about that decision.

Hamza: [The film was set] inside Aleppo over five years. Through those five years ISIS was in the city for only five to six months.

Edward: And this was the thing, [focusing on ISIS] is exactly what the regime wanted. They wanted the world to think that they were fighting crazy ass terrorists. ISIS is somewhat a distraction from the real struggle that's going on, which is these guys fighting for their freedom. People are just like, "Oh well, you know it's all confusing isn't it?" When actually, as you see in the film, it's not that confusing. It's people like Hamza and Waad fighting for their basic rights and being met with extreme violence.

Waad: I didn't want to make the film more exciting, it's about the truth.

"The conflict may seem far away, but so many things that are affecting people here all started in Syria."

So your film is about the reality of Syria. Another misconception is the role that women play in Arab countries. This film is obviously made by a woman but women are very much the backbone of the film. Talk to me a little bit about your experience being a woman in the conflict.

Waad: Any life could be threatened — whether you are a woman or a man or a child. Of course, as a woman I had some difficulties because people who live there aren't familiar with women being leaders or trying to film. But at the same time, the war changed a lot of people's lives. We saw women who never left their homes working and helping people.

I was also able to work with other journalists and activists, given that I was the only woman who lived with these people for five years and I was pregnant. I was filming while I was pregnant. Sometimes I went outside with the camera because people were used to seeing me as a member of their community and as a journalist. This built trust.

Throughout the film you see people with cellphones, often providing the only glimpse into what's actually happening. Do you think social media is ultimately a good or a bad thing for regions such as Syria, regions in conflict?

Waad: Without access to our phones and to Facebook, YouTube, and other apps we wouldn't have been able to tell our stories. This is something very powerful. For anyone to have that access, anyone can do something. On the other hand, it's helped a lot of propaganda spread from sources like Russia and Assad.

In one part of the film, after a massacre, you go outside and say, "I just have to be around people who are alive again." After leaving Syria, how do you cope with trauma and hold what you saw inside of yourselves everyday?

Hamza: The most important thing is that we were 100% sure why we were there, and we knew it was for a cause that we might die for: the freedom of the country and for the freedom of our daughters.

Waad: And now, we know how important it is for us to meet people and speak about what we experienced. We believe that we are alive for a reason, and because we're alive we have a very big responsibility to share this story.

Edward: The conflict may seem far away, but one of the things we're always talking about is that so many things that are affecting people here like refugee crisis, the way that's affected politics here and politics everywhere, all started in Syria. So many of these rules that used to keep us safe and used to regulate the international system, albeit imperfectly, the fact that that's all been shattered, it happened in Syria. Syria was where chemical weapons were used with impunity, it was where civilian populations were bombarded with impunity. These things may seem very far away but actually they're plugging right into the heart of things that are affecting you in your life as well.

Hamza, Sama and the staff of al-Quds hospital, which Hamza set up in 2012 in east Aleppo. Courtesy of PBS Distribution, Copyright Waad al-Kateab.

Relatedly, after you see the film you feel quite helpless. What can people do?

Waad: You know, the main thing is not about giving money. It's more about the political movement and how people can really be active in a political way to stop the war and stop the bombing of hospitals and schools.

Edward: We're setting up a campaign that will be live in September.

Waad: And it'll be about specific actions like calling the Russian embassy to tell them a story about what's going on in Syria. It'll be actions anyone can take, even if you have zero money to give.

Hamza: I think many western people get tired of Syria on the news. In their head they're like, "Oh, terrorists. ISIS. Turn the channel." But this isn't just about fighting terrorism. It's about helping real people, helping people just like you.

Waad, Hamza and Sama look at graffiti they painted on a bombed-out building, protesting against the forced exile of the civilian population of east Aleppo by forces of the Syrian regime and their Russian and Iranian allies, December 2016. Courtesy of PBS Distribution, Copyright Waad al-Kateab.

Hamza: Of course we will share the film with Sama because part of what Waad was doing for five years was to save the narrative and the stories, first for our own children then for other generations, but I'm not sure when.

Waad: When she comes to me and say, "I want to watch this."