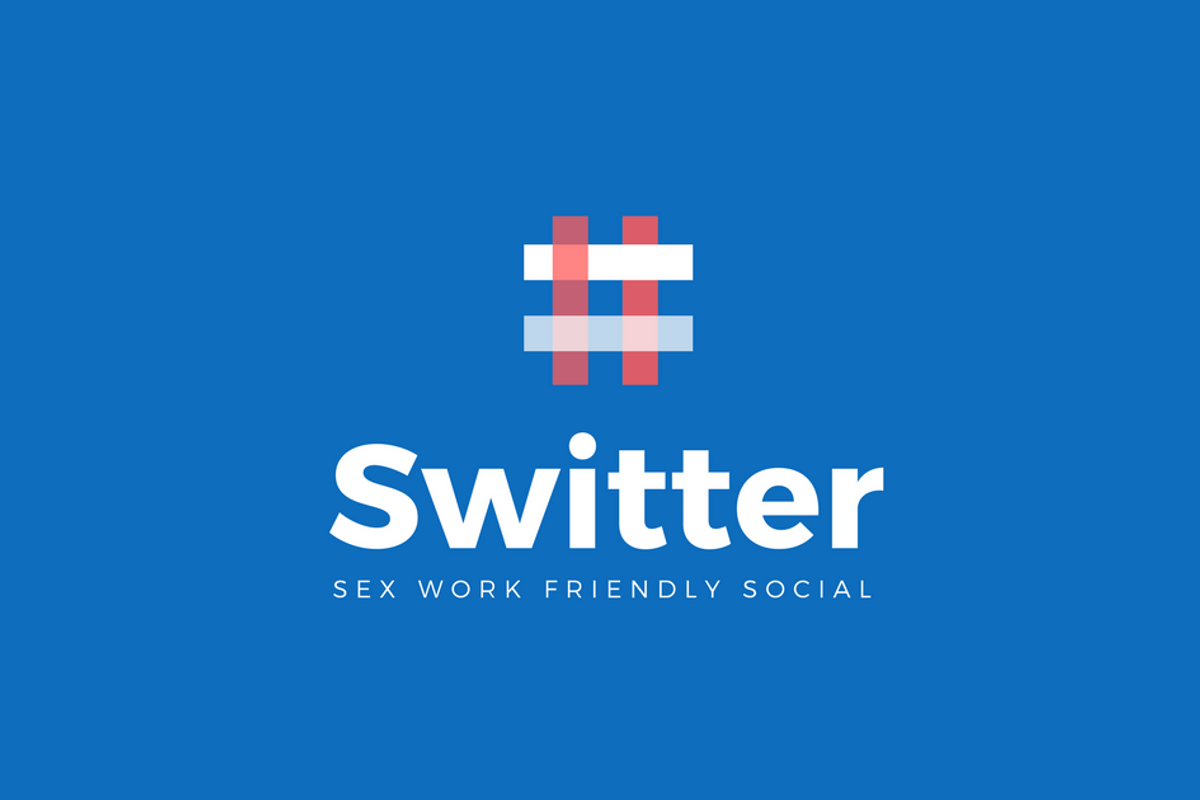 With Tumblr's adult content ban looming on the horizon and the unfortunate shutdowns of Backpage and Craigslist's personals section, it's no secret that sex workers have struggled to find new ways to connect with clients and the rest of their community. And though we're currently living in a world where sex work is blatantly under attack by big corporations and legislative bodies, a new resource called Switter has (thankfully) emerged — and it has the potential to help organize the entire industry and keep it afloat.

The brainchild of sex worker Lola Hunt, as well as technologists chendo and Eliza Sorenson — who together as the Melbourne-based Assembly Four — Switter is social network for sex workers, free of censorship, stigma, and misguided legislation. Unfortunately though, it's also an endeavor that has all the odds stacked against them and given the way the news has been going, it doesn't look like that'll be changing anytime soon.

However, that hasn't stopped close to 200,000 people signing up for the platform since its launch eight months ago. After all, in the wake of increased scrutiny surrounding online sex work communities, Switter has proven itself to be an indispensable tool for those looking to connect with clients and other sex workers. Whether it's being used for sharing safety tips, advertising, or keeping an in-depth Bad Date List alive, Switter is one of the few remaining tools available to sex workers — something that's even more important in a post-FOSTA/SESTA world.

"It's definitely become a refuge for a lot of workers. Particularly those in street work and many minority workers who would have had to turn back working under predatory parties," Hunt said, comparing the shutdown of sites like Backpage and Craigslist personals to having your office building gone. "We've received multiple emails from workers who have thanked us profusely for building this site, telling us they would either be homeless or they couldn't feed their kids without it."

"It feels like sex workers for the first time are gaining control in terms of the services we use."

Not only that, but Switter has also empowered other sex workers to start their own initiatives, products, and sites, from hosting providers to groups dedicated to building websites. "To bring a positive to it, it feels like sex workers for the first time are gaining control in terms of the services we use," Hunt explained. "And that's probably the only amount of control we have at the moment, but it's definitely a shake up."

Born one night after chendo's discovery of a decentralized, open-source microblogging platform known as Mastodon, the two immediately saw the possibilities the social network could offer for sex workers and got to work right away.

"I was like, 'We need to set this up for sex workers,'" Hunt said, explaining that she herself was going through the process of being banned on Twitter at the time. "We thought that maybe a few workers that had been shadowbanned on Twitter could move over there and it would be a little platform where people would share and communicate." Hunt laughed as she recalled that particular moment, "I was pushing chendo to launch that night" — an urgent instinct that proved to (unfortunately) be well founded. And soon after Hunt tweeted out the link, it went semi-viral on Twitter — launching a mass migration to the nascent platform.

"We just didn't understand the need for this at all. I had never seen growth in that way. My Twitter account was going crazy," she said. "Then FOSTA/SESTA was signed in a week after and we realized what was on our hands."

Soon, Sorenson joined the team and the trio embarked upon an eight-month journey that Hunt calls "fantastic," yet "terrifying" in its implications. After all, as Sorenson noted, the sex work community is one that "usually pretty self-sufficient" and chooses to "stay in their own sorts of spaces." However, the looming attack on their livelihoods spurred thousands of sex workers to join — something that Sorenson believes "shows how needed a platform like this was."

And the need for Switter has only grown, especially in the wake of Tumblr's announcement regarding their forthcoming ban on adult content.

"When it comes to tech there's so much pent up stigma [...] No one really wants to touch us."

However, despite their initial success and the obvious need for this platform, Switter has faced almost constant roadblocks when it comes to things many other industries take for granted, like server hosting or online banking.

"When it comes to tech there's so much pent up stigma," Hunt explains. "No one really wants to touch us and from what we've experienced over the past year, we can definitely see why no one else has tackled the sex industry, because it is such a difficult industry to operate in."

Enter the platform's drama with Cloudflare, the content delivery platform that shortly after Switter's founding effectively blocked it from operating, leading many to panic and believe the network had been compromised and completely shut down. "After that we decided it was too much of a risk to run with U.S.-based services," Sorenson said.

"It was a real shock to learn that a U.S. law can dictate how someone in a totally different country runs their life," Hunt said. Unfortunately though, America's legislative impact on Switter doesn't stop there, as money has also been a "massive struggle" for the platform. After all, it's no secret that most (surprise, U.S.-based) fundraising sites are also anti-sex work — something that makes keeping Switter up and running extremely difficult.

Assembly Four's solution? In addition to a Donations page as well as a Patreon that supports the digital security workshops they run, the team has set up another endeavor known as Tryst — a paid advertising platform for escorts. And while the platform is still in beta testing, the potential for Tryst to eventually act as an inclusive, streamlined directory that feeds back into the Switter community is massive.

That said, however ingenious their solution, it's hard to ignore the fact that Assembly Four must work 10 times as hard as any other start-up to merely survive — a horrifying realization, especially when taking into account the fact that many of the people Switter helps already have incredible odds stacked against them. However, while frustrating, both Hunt and Sorenson also agree that at the very least setbacks like the ThotAudit and Tumblr's recent decision have begun to bring mainstream tech's attention to the actual community and its needs.

"As a tech worker, a lot of us built the infrastructure, the software that is running today," Sorenson said, emphasizing the fact that tech is, and always has been, politicized. "I think we have an obligation to our users for it to not be turned against them... it's simply not good for us to say this doesn't affect us."