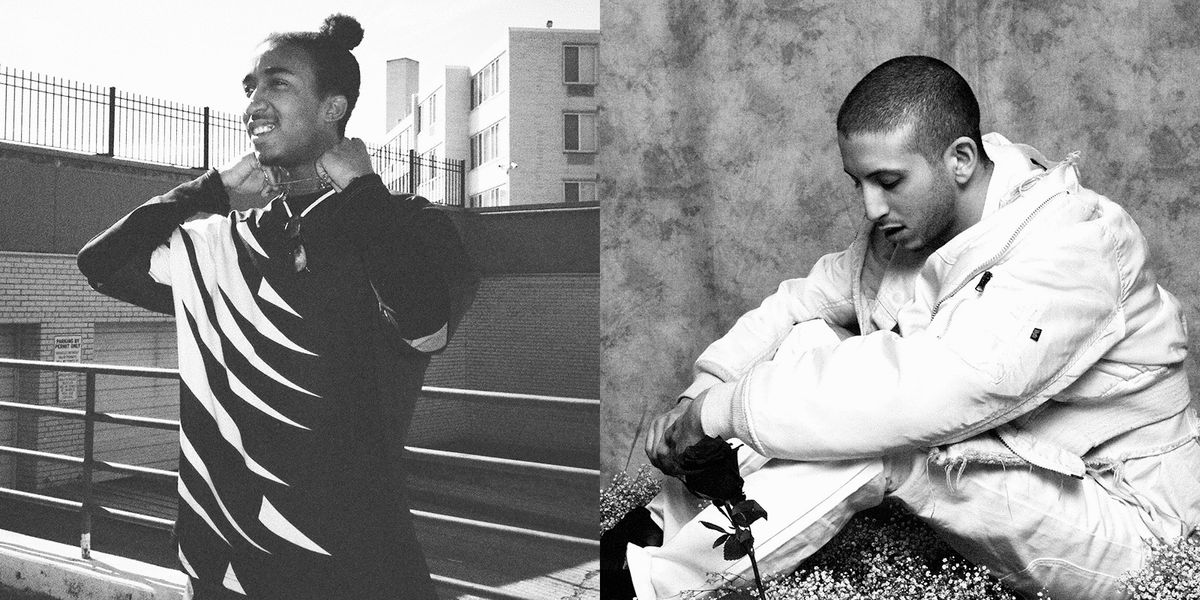 D.C. rapper Swan Lingo got people talking at the end of 2017, dropping one promising single after the next, before releasing his anticipated debut album Wonder What in February of this year. His 10-track debut features production from some of the best artists of the WEDIDIT collective, with Shlohmo, D33J and Craft Spells all jumping in to lend their talents to the cause. The result is a collection of songs that show Swan coming into his own as an artist, with heavy bass, neon synths and rapid-fire lyrics taking center stage.

Shlohmo and Swan Lingo got together for an off-the-cuff conversation about making music together, the creation of Wonder What and what the inside of a Swan Lingo fan's bedroom probably looks like:

Shlohmo: How'd you come up with the name Swan Lingo?

Swan Lingo: Actually, it came up from a short period when I lived in Richmond, VA. I was recreating myself as an artist, and working on different styles that I wanted to incorporate in my music. It really came to me when I was state of smoking a lot of weed. It came to me like a dream.

That's what it is. So you were in Richmond for a little while but you grew up in D.C.?

Yeah I only lived in Richmond for like 9 months. It was very short, but I met a lot of great artists out there.

I'm curious what growing up in D.C. was like, music wise. What influenced you growing up? What kind of scenes were out there?

Not much really. There's a local Go-Go scene which is a genre based in D.C. but outside of that I grew up listening to The Fugees, Lauryn Hill, and that kind of stuff. My parents would play that a lot around the house in the morning when I would eat breakfast, in the car, on the radio. I had a lot of influence from other places not really D.C., but New York, just a lot of hip hop.

East Coast influence for sure.

WEDIDIT on Instagram: “✨THE DAY HAS ARRIVED. THE DEBUT ALBUM “WONDER WHAT” BY @swanlingo IS OUT EVERYWHERE MUSIC IS SOLD. ✨”

I noticed when we first started talking, the kind of music you were making and your homies were making, it was super different from the surrounding scene and what other people were doing. There was a lot of real core rap and trap music. What really caught me about your music was how influenced by that it felt, but how completely different genre-wise it was. I guess that's not even a question, just saying.

What made you first want to break out from regular rapping? Did that just happen naturally?

The desire to want to be heard. I still want to be heard more now. It's a constant drive to want to be better and do better and go further. It didn't work before that way, it's starting to work now, so I just kept it moving. You already have the skills. Like they say, talent beats hard work when talent doesn't work hard. Something like that.

Let's talk about the new album. Wonder What, which is out now and we did it. Go get it! We're telling you. What was that process like for recording?

I came to L.A. for the first time, and I stayed with Shlohmo. The first night we made "Colan," I think?

It's on the album, go get that! [Laughing] I was collaborating with everyone else in WEDIDIT, D33J, Groundislava, and C.Z., and my other friend Rory. It was a nice process of being in a new place, new environment, and getting different inspiration to put this project together.

It was super fun. I like that it became a song from everybody on the team, and then you C.Z. ended up clicking up for a long time and making a bunch of tracks. Shout out to C.Z.. I realized that, I didn't even think about it before, but I've almost made like all of the covers.

Right! Shout out to you.

I feel like I was just mad inspired. I do a lot of graphic design for WEDIDIT did it anyway, but your music specifically I was like, "Oh, I know what I want to do for this." I felt like since you had such a specific vision also, we were riffing off of each other. The first one with the hand holding the broken mirror, that was your idea and it just translated into me drawing it. How did we come up with the new album cover? I think we were just talking about it, like it would be cool if the perspective was from a fan that listens to Swan Lingo. Like their shitty bedroom. Smoking a joint, looking at Swan Lingo cartoons.

You produced a bunch of the songs on the album yourself which is pretty wild. I love your production.

When did you start producing? Was it around the same time you started singing and rapping?

I'm still not even a producer producer. I had a dude engineer me and I'd do everything on the keys. I made the beat but he did all of the structuring because I'm not there yet. All of the sounds and everything though, I did that. I'm good on the keys so I'll create that way. I won't let that stop me laying down what I want to lay down on the beat.

I think one of my favorite examples is "Colan," that beat is wild. What do you have coming up? We've also got you modeling for the new clothing line, that'll be funny. What are we working on now?

Right now, I'm back in the lab working. Working on a new album. Everything is under construction. Can never reveal too much. We've got to leave something under wraps.

Stream Wonder What, below: