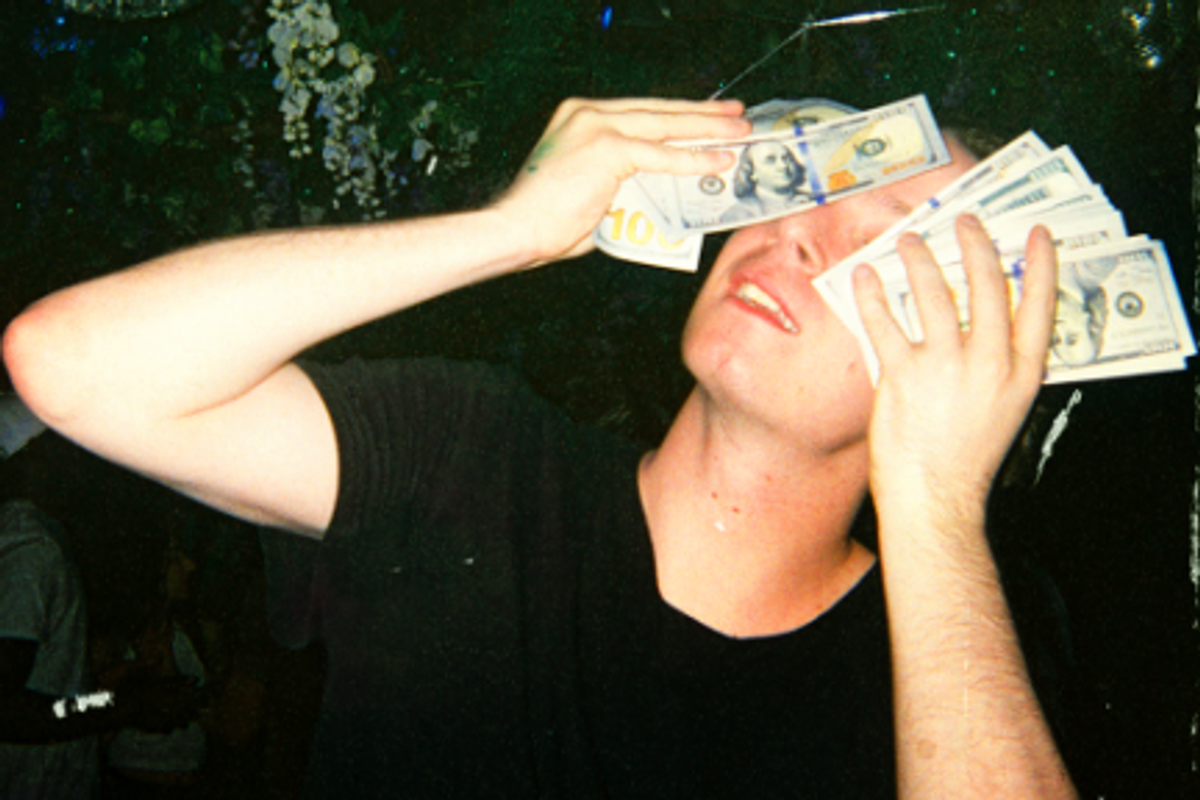 If you were ever to meet a hip-hop jack-of-all-trades it's OnCue. That's not to say, however, the New York rapper/singer is master of none, au contraire, his melodies attracted music legend Just Blaze and the two have since proved a masterful match indeed.

As a white rapper who wears leather jackets and gels his hair, you could be quick to pigeon-hole OnCue as the next G-Eazy, but OnCue's sound is both more flexible and much more cerebral than that. His track record shows a history of mining his personal struggles with music, rather than glamorizing his come-up in a flurry of hot girls and liquor.

Don't get me wrong, there's plenty of that too, but unlike many other young artists OnCue, doesn't need to make his career off unwarranted, or premature, flexing. Not only is his latest single Rent Money the perfect sonic summation of that ethos, but with OnCue's new EP PERFECTLY, TRAGICALLY, FLAWED dropping this month, we're about to see the full scope of what he's capable of.

We sat down with student and master, OnCue and Just Blaze, to talk the perils of producer/artist relationships, PTF and what makes good music.

I heard you like this track 'Rent Money' more than you like your first release off the album, so I'm curious, why wasn't it not the first single of the album?
Just Blaze: Thank you, that's the question of the album.

OnCue: Well 'Rent Money' was made outside the whole project and we were like we've got to keep it for Perfectly, Tragically, Flawed. I wanted to warm people up. When you're not in a major label system often you'll unload too quickly with the first single and every song after that is like "yeah that's cool but I liked the first single."

Just Blaze: Sometimes you know what you want the singles to be, what you want the artwork to be and a song comes along that you didn't expect and you have to start rethinking the plan. It was clear with 'Rent Money' that this was the hit, but you don't always want to shoot your best clip first.


How was the response to 'Cry Wolf'?
OnCue: Cry Wolf's been great. I mean I'm in a transition in my career since I sing right, I have a lot of parts of me if you will. So '3am', which is a single I put out last year, was more of an RnB, whereas 'Cry Wolf' really sounds like the old me so it was always going to go down well with my core fanbase. 'Rent Money' though, is totally the new me.

So why move towards RnB, then revert back, then create something completely new? Why all the jumping around?
OnCue: That's a good question, a lot of the records I released later came after PTF was done. PTF is very cohesive, it's six songs but it feels like an album. There's not necessarily a fucking storyline, beginning, middle and end, but there's definitely a trajectory of thought. I just wanted to make music that I love and the producer loves. That was it.

Just Blaze: I think ultimately, early on in our relationship...

Because how did you guys come together?
JustBlaze: Our friend Alex.

Just Blaze: The bald god! The youngest bald guy I've ever met. Well, I've worked with a lot of veteran artists and it's great but one of the things that define you are the new things you help introduce to the world. Ultimately those new artists, they're the things that keep you cool. It helps because they're getting a stamp from a veteran like me and they're helping me maybe create the biggest record of my career. So Alex played me something and I was like "this is good." Then we linked up and after that it was all about finding a formula and an aesthetic that worked.

What's the difference between working those veteran artists and then working with those that are less established?
Just Blaze: I will say this and I'm not saying it in reference to him specifically, the most interesting things that I've noticed is that they end up being the most difficult ones to work with.

Just Blaze: It's not about you specifically. Veteran artists, guys like Jay Z, Mariah Carey, Rihanna, people that were already superstars, they know what they bring to the table and they know what I bring to the table. They're also a lot more secure because they're superstars. Younger artists end up second guessing themselves a lot more. With him I was like you have the sound and the aesthetic, I said, "Do what you do and bring it back to me." I already liked it. Let me dot the "t"s and cross the "i"s.

What's that like for you, learning that someone of this calibre wants to work with you?
OnCue: I was like "fuck yeah", I mean I grew up on his shit, our first sessions together kicking it were so great. I like how he gives me my room and lets me go to do my own shit and figure it out. If I needed to bend his ear at some point, he was there. He comes in, puts the JustBlaze filter on it, spices it up and it's ready for the world.

Just Blaze: A lot of the things I've noticed with new artists is that the A&R has this whole other vision of who he wants this artist to be and it's like, you're not taking him and making him someone else. Why don't you find yourself a whole other person if that's what you want?

Just Blaze: I've definitely seen a positive shift over the past two years.

OnCue: On our first project together Angry Young Men I thought, "I'm about to put out a project with Just Blaze" and I got into my own head.

Which is exactly what Just Blaze was talking about.
Just Blaze: Right.

OnCue: After that I was back to business and I made a project I myself didn't think I was going to be able to pull off, which gave me a lot more confidence. I had my first European show in January and I was like, I wrote this in my apartment in Greenpoint and now I'm here.

Just Blaze: That's something that never really gets old. I remember being 16 and putting out the first mixtape I'd ever made and a car drove past playing my mixtape and I was like "Oh shit."

That would've been like ice cream man vibes.
Just Blaze: I felt like I had made it! I was like I'm done I made it. Fast forward 20 years later and your records are on the radio. It just never gets old.