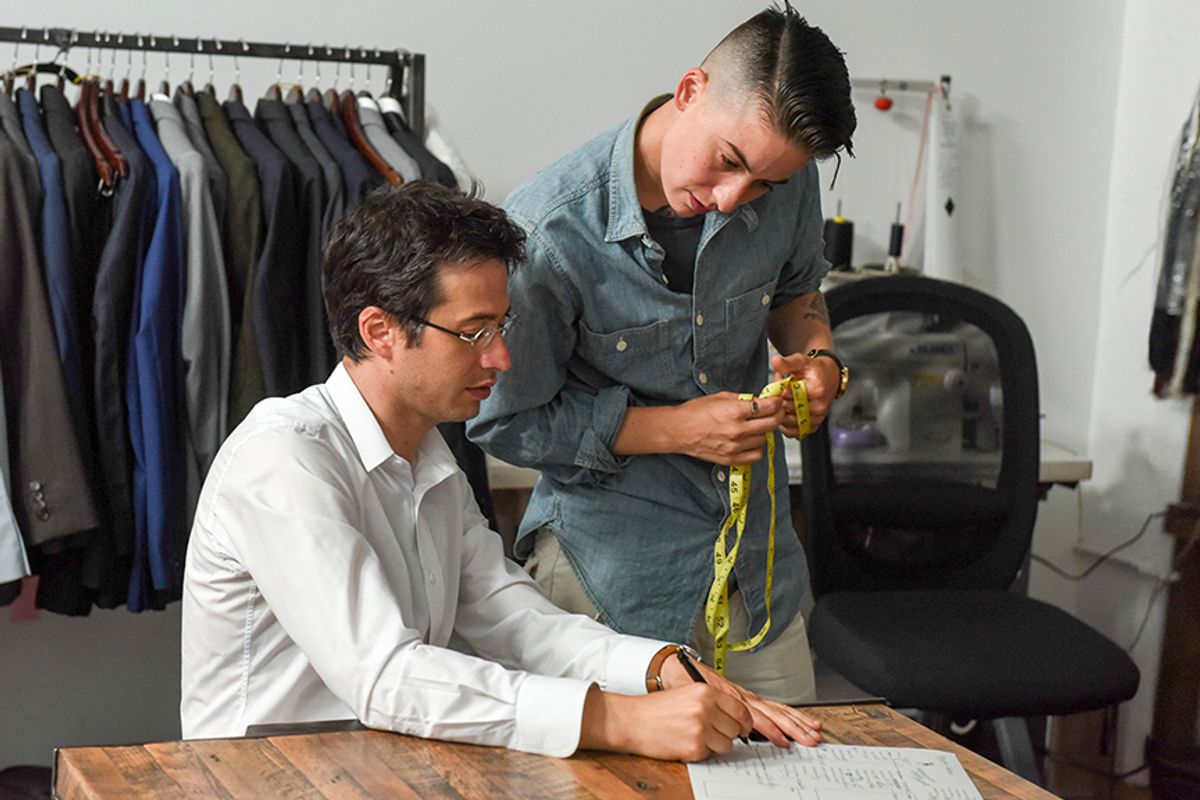 A Q&A with director Jason Benjamin

Three years ago director Jason Benjamin read a story in the New York Times that he couldn't shake. It was about a fledgling suit-making outfit in Brooklyn called Bindle & Keep that catered to a trans and gender non-conforming clientele who couldn't find clothes, specifically suits, that made them feel like themselves. To Benjamin, the moment of a client seeing themselves for the first time in a mirror, after years of disillusion and pain around the simple act of putting on clothes, sparked the idea for a documentary. The beautiful film that resulted, Suited, premiering tonight on HBO, tells the story of Bindle & Keep tailors, Rae Tutera and Daniel Friedman, and the triumphs and struggles of its patrons. We spoke with Benjamin this weekend about the documentary process, trans discrimination, and his own "mirror moment."

What was the initial idea for the the film and how did you go from that to making it with Lena (Dunham), Jenni (Konner) and HBO?

I read a New York Times article in 2013 about the work that Bindle & Keep was doing and in that article there was a description by Rae Tutera, one of the tailors there, talking about bringing a suit to someone who was struggling with gender presentation and body issues for many years, bringing them a custom suit for the first time and how exciting that is. To watch them look in the mirror is a moment of self realization and empowerment. It was that moment that struck me as incredibly powerful and had me thinking about the article a few days after I read it. At the time I was working as the boom operator on Girls, which I still am, and through that I had a relationship with Lena Dunham and her creative partner Jenni Konner. So we were on set one day and I asked them if they'd read the article and that I thought it would make a great documentary. They knew I had background in documentary and they had just set up a production company and they said "go investigate it." So I sent a cold email to Rae who took a while to get back but we met a few times and got to know each other and I began to understand a little bit about trans-ness and gender non-conforming people and the language of that experience. Rae was sort of my spirit guide into that world. I went back to Jenni and Lena and they gave me their own money to shoot like 10 minutes, so we made a sample reel and they loved it and we brought it to HBO and they bought it immediately. They bought it is a short film, no more than 40 minutes, which was fine with us. But we kept them in the process and their notes are always good, so we submitted rough assembly to them and general arcs of the characters, loosely edited, and they said they wanted to make it into a feature. So from reading the article to HBO making it into a feature there was a series of "yeses" which is sort of unusual with a documentary. Part of that is the timeliness of the subject matter and the other part is the characters were all really solid and compelling.

How did you go about picking the subjects, the folks who come to Bindle & Keep for fittings?

Every client contacts the tailors first through email on their website so they would forward me emails and I would look for something, like a narrative structure that might be present, or some interesting element. Then I would send my own email to them, saying "heres who I am and what we're doing and would you be interested in talking?." We would have lunch and take a photograph and write what we talked about which I would send to Lena and Jenni. Through that process we were able to curate the stories we were working on. One of the things I was after was to characterize the experience that was not just happening in New York and Los Angeles but as a broader cross-section of the US. I was hoping to get people from all different regions, and age groups, and economic strata to participate. I hope that comes through. The only thing I can say is that if you're coming for a custom suit that economically you're sort of from a certain place. The economic diversity isn't there as much as I'd like, but I think most of the others are there.

One of the clients, Derek, says when he goes in for his fitting, and I'm paraphrasing, is that his hope for his suit is that no one would be able to tell him apart from a line up of other men in suits. To me that moment touched on the fact that for many trans people dressing is not just an issue of comfort and self-realization but also safety, did that come through at all while filming?

I have to say the statistics of violence and discrimination that trans people deal with are horrifying, this film didn't really deal with those aspects of their lives. That was on some level a choice also because the stories were vérité style and we were following peoples lives simply as they were unfolding. One of the many things I took away from the experience is that if we see gender as a spectrum, male on one side and female on the other, and all of us is somewhere on that spectrum and your place on that spectrum is free to shift and change as you need it to. Gender non-conforming people like Mel for instance, the cab driver, who was fantastic, is sort of not easily identifiable as a gender presentation. I thought Mel's story was a particularly important part of what we were doing since it was not just the full trans experience, but showing it as completely unique to each person, and is up to them how far they want to go medically and dressing wise and how they can be comfortable.

You were filming people during very vulnerable moments, were there any that stuck out for you?

There were two where my heart was broken. One was when Everett, the law student, just very matter of factly talked about how someone told him he was everything they want in a candidate except that you're trans. To me that struck me right away as blatant discrimination, and unbelievable. As Rae said in the film, he was so graceful how he accepted that. It made me so angry and I felt a lot of compassion for him. The other moment I would say was young Aidan, who is preparing for his bar mitzvah, and he is getting measured and was just so uncomfortable and in this small little voice and he says "…I don't look good in clothes and this is going to be the same thing." I looked over at his grandmother and she was crying. I got a sense of how early this crushing, negative self awareness can take root and how devastating that can be for a young person, and it was really hard to watch.

I noticed that Aidan's father, who he mentions was initially unsupportive, came to the final fitting which was unexpected and kind of heart warming?

It's hard to know exactly what happened at home, but his father was sort of a surprise character, and was really supportive of the project. A really unexpected twist and he was fully supportive!

What was your experience with the trans and gender non-conforming community before the film?

I had no exposure and when I read the story in the New York Times and contacted Rae I didn't really acknowledge it as a trans story, it was a story about people to me. It was only once I met Rae and started to understand the elements of clothing and that specific experience of not being able to find clothing was that I realized the trans link to it. When I install read the story was about people being fully realized. And as I got to meet people from the trans and gender non-conforming community was that after about 5 minutes you forget completely what their gender is. You process that very quickly, how they identify and their preferred pronouns, and then you move on from there and talk and relate as people. So I wanted to treat the characters that way, people are interesting and being trans or gender nonconforming is only one small element of a person's overall make up.

For someone watching who has little or no relationship or exposure to the trans and gender non-conforming community, what would you like them to take away?

I really hope that young people and parents who see the film will find some new way of empathizing and realizing that we are not that different and provide a possibility model for gender non-conforming people around them and behaving constructively and giving love.

Do you look at how you dress or wear suits any differently?

Funny you should ask, when we went to Sundance I had Bindle & Keep make me two suits, and I wish I had done that earlier in the process. Because I have to say, the day I went to try on my suits after being measured and I had my own mirror moment where I was like, "wow that's me" do I like the way this looks? I could feel my blood pressure and my face flush and I thought this was very tough to do. I had to look at my self closely and critically, and tell Daniel if it fit the way I want it to fit, etc. And you realize the suit fits fine, its not the suits problem its my own view and feeling about myself and my body. It took me a minute to process those emotions, but it may have informed me better. Its a universal experience to look in the mirror and say "OK, that's me."