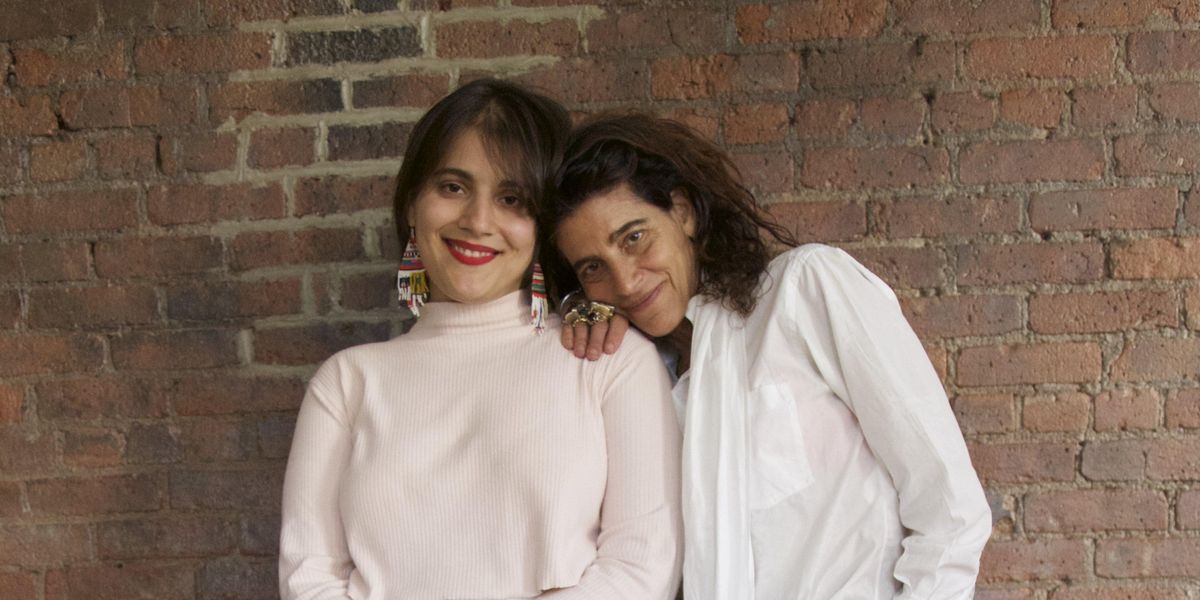 The fashion industry has changed quite a bit over the last eight years, with commercials, magazines and billboards featuring bodies and faces previously deemed "off-brand." The mainstream conversation around inclusion, body image, and self-acceptance has evolved in recent years, and Elisa Goodkind and Lily Mandelbaum have been there right from the start. The fierce mother-daughter team are behind the groundbreaking multi-media platform StyleLikeU, which celebrated its eight-year anniversary this spring with the release of its long-awaited book, True Style Is What's Underneath: The Self Acceptance Revolution: A StyleLikeU Manifesto (Rizzoli).

In April, for the first time in StyleLikeU's history, the team created an open casting platform for their flagship, viral video series, "The What's Underneath Project," which encourages featured subjects to strip down to their undies and reveal their insecurities, and more importantly, how they overcame them. The project now boasts over 35 million collective views on YouTube and has featured a diverse set of personalities including HBO's Girls star Jemima Kirk, Melanie Gaydos, an "unconventional" model and muse with Ectodermal Dysplasia, Lea Delaria of Orange is the New Black, Urban Bush Babes founder Cipriana Quann and many more. These stylish trailblazers are included in the book, along with over 250 portraits.

We caught up with Goodkind and Mandelbaum the afternoon before their jam-packed book launch party at Housing Works Bookstore in downtown Manhattan and talked the body acceptance trend,

You mentioned that April 11th was your 8-year anniversary.

Lily Mandelbaum: At least that's what LinkedIn told us. [Laughs]

Congrats. Has your mission or message changed or evolved since you began?

Mandelbaum: The message has always been the same, but it's become more crystallized to us in terms of what we're saying. For instance, the book is split into seven chapters. What we've learned over the last eight years is how to narrow down all the essential elements in empowering personal style--the instincts, these intangible things we're drawn to. We've come to better understand why these people are so inspiring and why each and every person on this planet is an entirely unrepeatable work of art.

Elisa Goodkind: As opposed to what society is telling you: be like everyone else and conform. We are entirely inverting that by saying, "What is the truth? We are entirely unrepeatable. No one person is like the other. That distinction and singularity is your gift. That's where the beauty is.

Goodkind: For instance, "Turn Your Struggles Into Your Strengths" is a chapter in the book that deals with this. Gail Chovan (designer, academic) had a double mastectomy and chose to opt out of reconstructive surgery. People like her have actually owned these things and become their most unique selves by accepting them.

The conversation around body image has changed quite a bit, though no one seems to be addressing it. Kylie Jenner for instance, who is only 19 years old, went through a pretty public physical transformation. She arguably didn't accept her flaws, in the way you're talking about. How do you feel about this and the fact that she's often positioned as a role model?

Mandelbaum: It's a good question. We're not judging. StyleLikeU is not about "fur or no fur," "lipstick or no lipstick," "high heels or not," "plastic surgery or not." We're all about intent and being true to yourself. At the end of the day, if you have no clothes on and you're able to be open, honest and vulnerable, if you can share and embrace the messiness of life and be at peace with yourself, then that's fine with us.

Goodkind: For me, this is somewhat complicated. It's all about intent. I don't know. Like Lily said, if a trans person for instance goes through this, it's a bit more complex. An older person who has a facelift and does Botox however, that's not beautiful to me. You're screaming that you don't like yourself--that you don't accept where you are. You're conforming to something outside of yourself, most likely a corporation making a lot of money off of an ideal. Most people hate themselves so they buy into it--throwing away the very things that make you unrepeatable.

Would you have Kylie on "What's Underneath?"

Mandelbaum: It's all about whether or not she's willing to be open and honest about her choices.

Goodkind: I've had fantasies about Kim [Kardashian coming on]. I think that would be really challenging.

Do you have other fantasy guests? What about Hillary Clinton?

Mandelbaum: I think she's great. If she's dressing the way she wants to dress and it makes her feel powerful, I don't have anything to say about that.

Goodkind: We think that she fits in. I think Bernie Sanders would work well too.

Goodkind: Yes, Michelle--but Hillary, her whole pantsuit thing was cool. She's up against so much. We don't judge that. If she has to repress something to get somewhere in a patriarchal society, it's certainly problematic, but we think she's really strong.

Goodkind: I don't know. My take on her: She's a very elusive person. She seems pretty controlled. It would be nice to see her being a bit more of a badass. She's in a very powerful position to break a lot of walls down. It doesn't seem like she's doing that so far. I don't really see her taking any risks in using her power to create any substantial change. She seems very much a part of the patriarchy, or at least it appears that way.

Do you think this book is accessible to people outside of creative, liberal bubbles or major coastal, urban centers like New York or LA?

Goodkind: We're starting to do this a bit with the open calls, where everyone can participate. It's about self-love. Anyone can understand that. What we find with these stories, they're hard to criticize. Even someone who voted for Trump can look at Gail Chovan and feel inspired. These bold choices can be really empowering to anybody. I can't imagine anyone who looks at her images and reads her story would not think that opting out of reconstruction is really brave, strong and a legitimate option.

It's true; cancer cuts across class, race, and gender. Also, it's an universal experience to be self-conscious about your body.

Mandelbaum: The bulk of our work is video-based. One of the things we're most proud of is the raw intimate nature of our videos. These stories are not told with a particular agenda in mind. It's just a vulnerable person sharing their stories and experiences. One of the things we hope our videos do is bridge the divide and help people recognize that we do have different experiences, often based on race, class and gender, but we have similar emotions. After exploring the emotions behind someone's experience, you can understand them better and judge them less harshly or not at all. Self-acceptance is the main message, but in that, you learn to accept others.

A clear symptom of this current existential crisis we're going through is an egregious lack of empathy.

Goodkind: What we've found is everyone's story is everyone's story. The person might be a totally different age, from a different place, but at its core, whether it's cancer, loss, how you feel about your body, aging; it's universal. That's the point of taking your clothes off. You get past this surface level judgment, which separates us, which makes people fear others and drives us to conform to certain groups. That's what we're trying to unravel, because at the end of the day, whether you voted for Trump or not, we're all interconnected and these stories repeat themselves.

Mandelbaum: I experience that personally. People open up to us because we're in touch with our own struggles and pain. We feel vulnerable.

Will you share some of your insecurities? What makes you feel vulnerable?

Goodkind: I have a really difficult time with being misunderstood. That's pretty much a very painful and unavoidable experience, especially if you're doing anything that matters at all.

Eight years later, how has the industry changed? Is it going fast enough?

Goodkind: It's inevitable. It's unstoppable. Why would people choose self-hate over self-love? That's really the choice.

Mandelbaum: If the Internet and social media continue to enable people like us and other communities searching for an alternative to self-hate, we'll win.

Goodkind: Trump was a huge wake up call. His victory created a real awareness that wasn't there before. Your freedom, your life, your expression, these things are fragile, but they are also humongous things that can't be avoided. Self-acceptance is needed in order for us to free ourselves and to reach our full potential and solve these bigger problems. As long as we're concerned about whether or not we have Kylie Jenner's lips, we're sunk.

Are you going to wake up and make the most of who you are and free yourself of your addictions and these things that plague, destabilize and disempower you, or is your life more valuable that that and that of your friends, family and offspring? It's your choice.

All images courtesy of StyleLikeU.