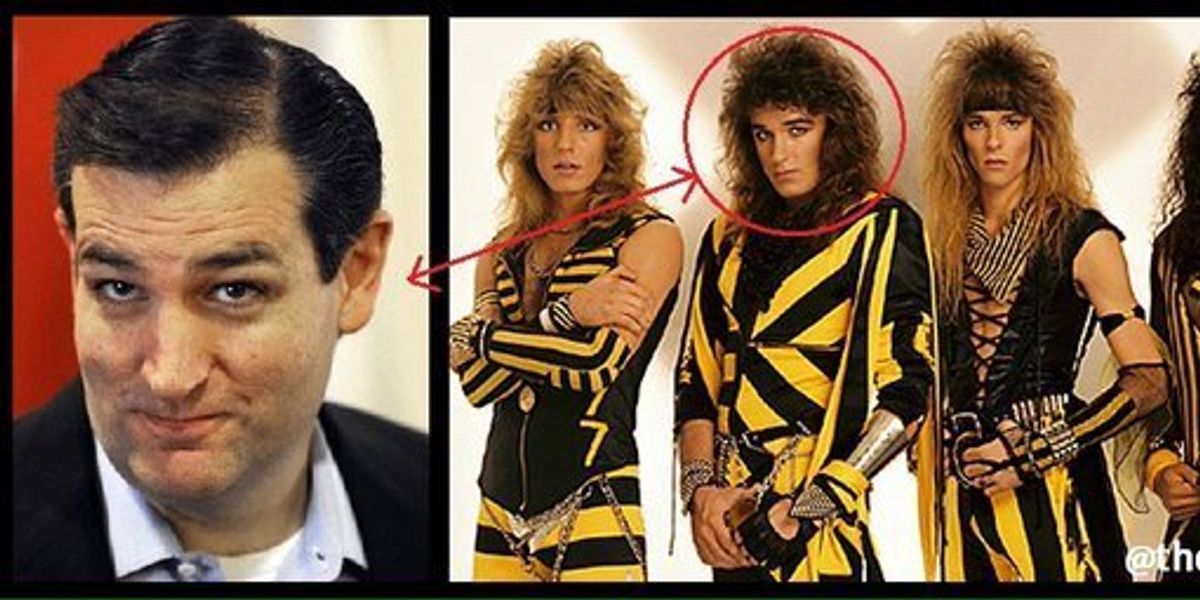 Stryper Frontman Says He Is Totally, Definitely Not Ted Cruz

Sure, Michael Sweets, sure...

One of the weirdest and funniest things to crop up in this nightmare primary cycle is the meme that Republican candidate Ted Cruz is not who he claims to be (mostly because everyone is so desperate for Ted Cruz to...not be Ted Cruz). It began with the rumors that the Texan senator was actually the Zodiac Killer--a claim which was not satisfactorily disproved for almost forty percent of Florida voters. The most recent theory is that Cruz is in fact the frontman of Christian heavy metal band Stryper.

Michael Boulerice first pointed out the eery similarity between the two on Twitter.

Then, alleged Stryper frontman Michael Sweets commented, tweeting, "Guess I better cancel the Stryper tour to focus on my campaign."

So I guess my doppelgänger is @tedcruz? Guess I better cancel the @Stryper tour so I can focus on my campaign;-) pic.twitter.com/3ODcvA0Bjd
— MichaelSweet Stryper (@michaelhsweet) March 13, 2016

He then appeared to backpedal, almost certainly because he was going to blow Ted Cruz's cover wide open and definitely not because the Internet rabidly took his joke as an endorsement of its new favorite conspiracy theory.

My apologies about the silly blow up @tedcruz of you and I being one and the same. Do you even know who @Stryper is? #HeavyMetalCandidate
— MichaelSweet Stryper (@michaelhsweet) March 17, 2016

But those in search of the truth will not be pacified. They continued to push, making the Cruz/Stryper theory a regular trending topic on Facebook. Michael Sweet was forced to deny the entire thing yet again, this time to Billboard in a statement yesterday. "The whole Michael Sweet/Ted Cruz comparison came as a surprise," he told Billboard (sure). "I don't see any resemblance but I'm certainly laughing at the whole thing going public and being the #1 trending story on Facebook! I do hope Ted is a Stryper fan and that he comes out to a show this year on tour. Maybe I'll have him up for a song so we can put this whole thing to rest."

But doth he protest too much? Sweet talked to CNN last night about the doppelganger theory, telling the camera point blank: "I really am Ted Cruz--and I have very big hands."


On one hand, who wouldn't want to get the stigma of being compared with Ted Cruz out of their Google search results? On the other, Stryper and Cruz are both Christian-oriented, they've never been seen in a room together, and Stryper's next tour starts in April--conveniently when sentient angry spray-tan Donald Trump will have handily knocked Cruz out of contention for the Republican nomination. You can watch the CNN bit below and decide to take the Cruz conspiracy theory red pill or blue pill.