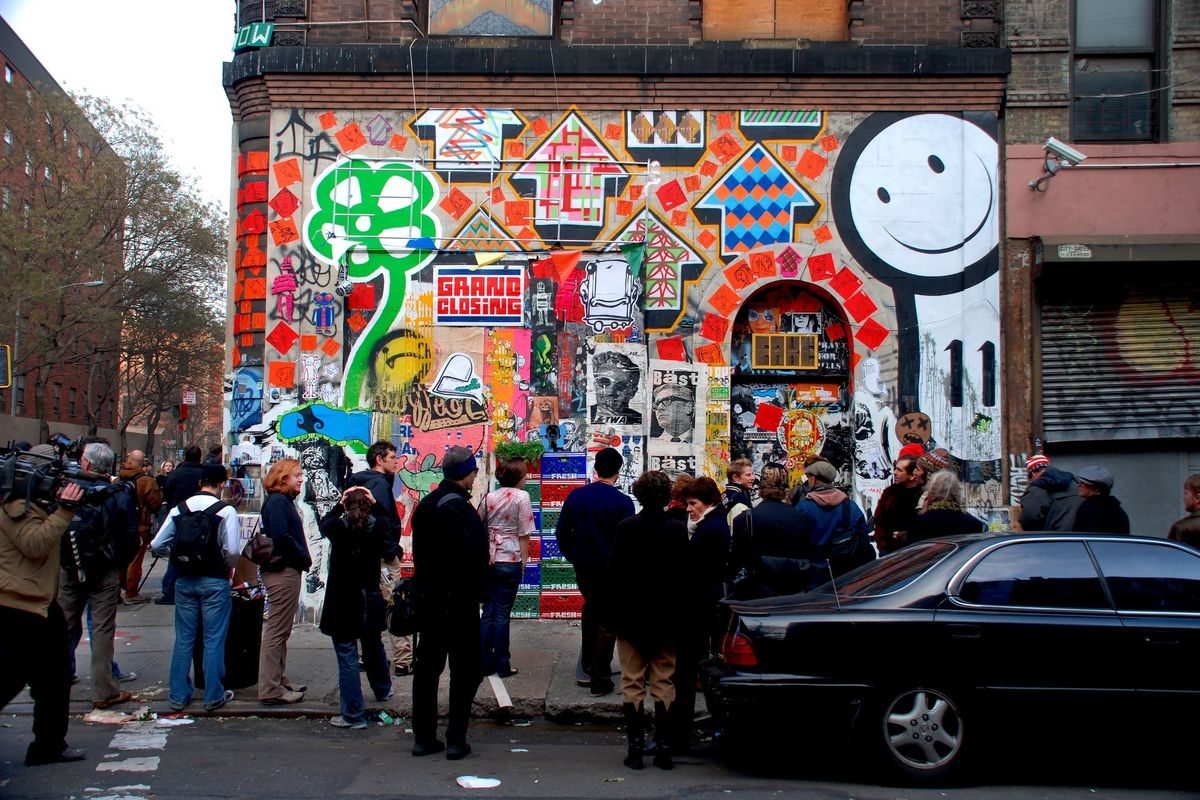 Notes From the Underground: Looking Back at Street Art's Peak in "Eleven Spring"

Street art has always been transgressive, with underground artists marrying beauty with the power of illegal actions--art that went hand in hand with the very real danger of arrest. Now street art and graffiti have transitioned into a mainstream genre, and art on walls is as likely to be an ad coopting that power as an actual guerilla artwork.

Eleven Spring: A Celebration of Street Art, out this week, celebrates a pivotal moment in that change. It's the tenth anniversary of a massive, five-floor collaboration that brought together street artists from around the world to take over the building at the titular address in Soho. The contributors, including Shepard Fairey, Swoon, JR, Faile, and more, are a laundry list of the '00s era heavyweights--many of whom have gone on to have successful careers inside the traditional art world. We spoke with Sara Schiller, co-founder of website Wooster Collective and co-author with husband Marc, about the importance of the Eleven Spring show, the need for illegality in street art, and how New York has lost its edge.

What was the importance, looking back over ten years, of the Eleven Spring show in bringing street art to the general population and art world?

I think the importance of the show itself is that it happened at a really pivotal moment in street art where it was still more of an underground thing. It hadn't really entered the mainstream, brands hadn't co-opted it, etc. The Wooster Collective blog was this intersection of street artists from around the world. We were putting up art from all over the world, people were having a dialogue, and this building almost became the physical symbol of that. And what happened afterwards—and some people would say that perhaps Wooster Collective and the show helped this happen—is street art became much more mainstream. Gentrification is sort of always happening, cities are always evolving and changing. Soho had been such a hub for art, and this building in particular had been a living outside gallery for over a decade. As we saw that starting to change, both from the forces of property owners wanting to keep their buildings more pristine and a very active vandalism squad that was fueled to crack down on artists, a lot of those artists began to move out of the neighborhood and put their work up in other cities. Because New York had lost its edge, and it moved on to Berlin and Barcelona. 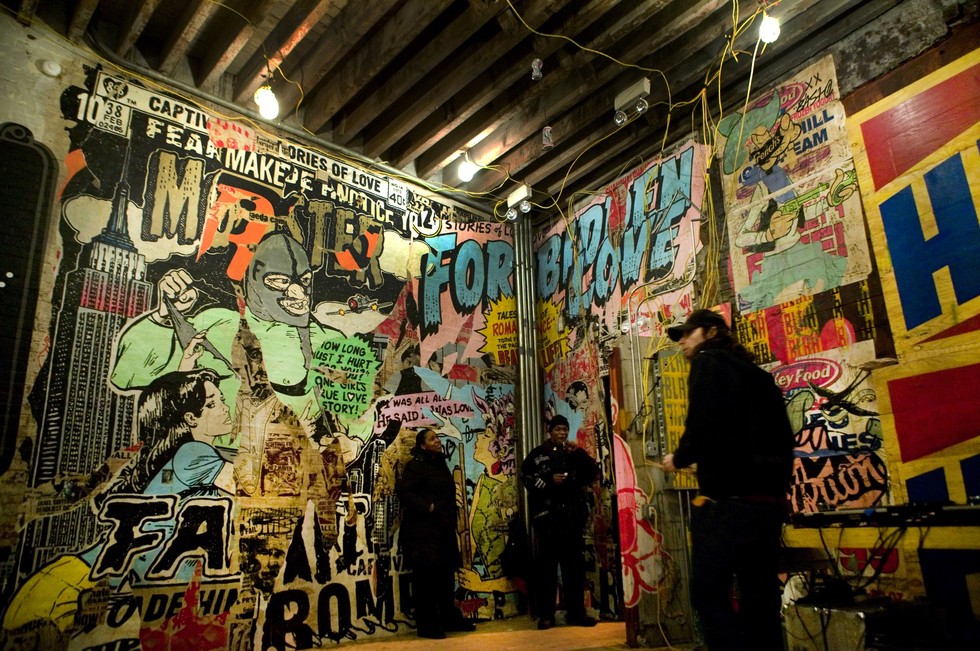 Faile's "Forbidden Love," melding into works by Skewville and Bast. 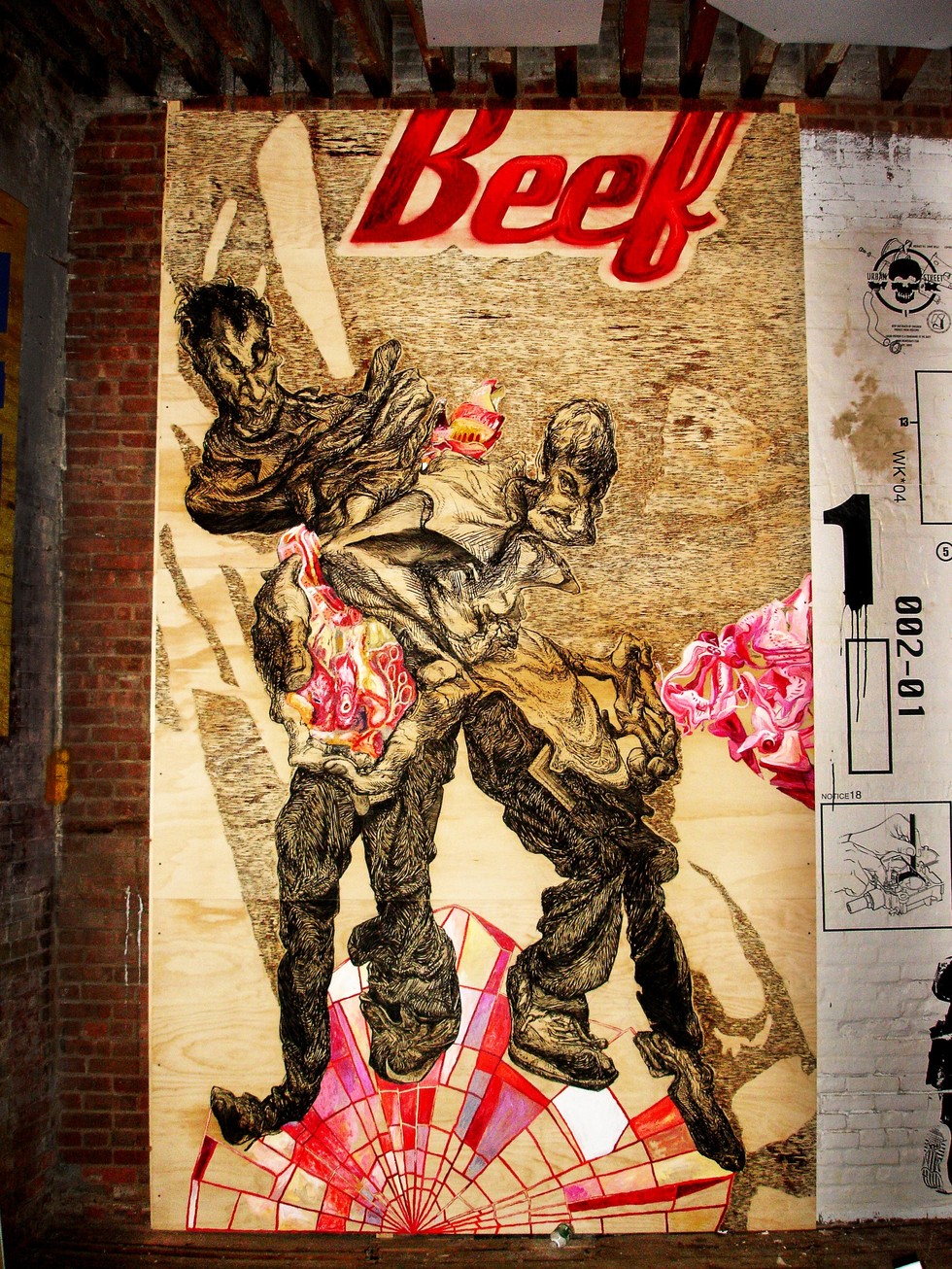 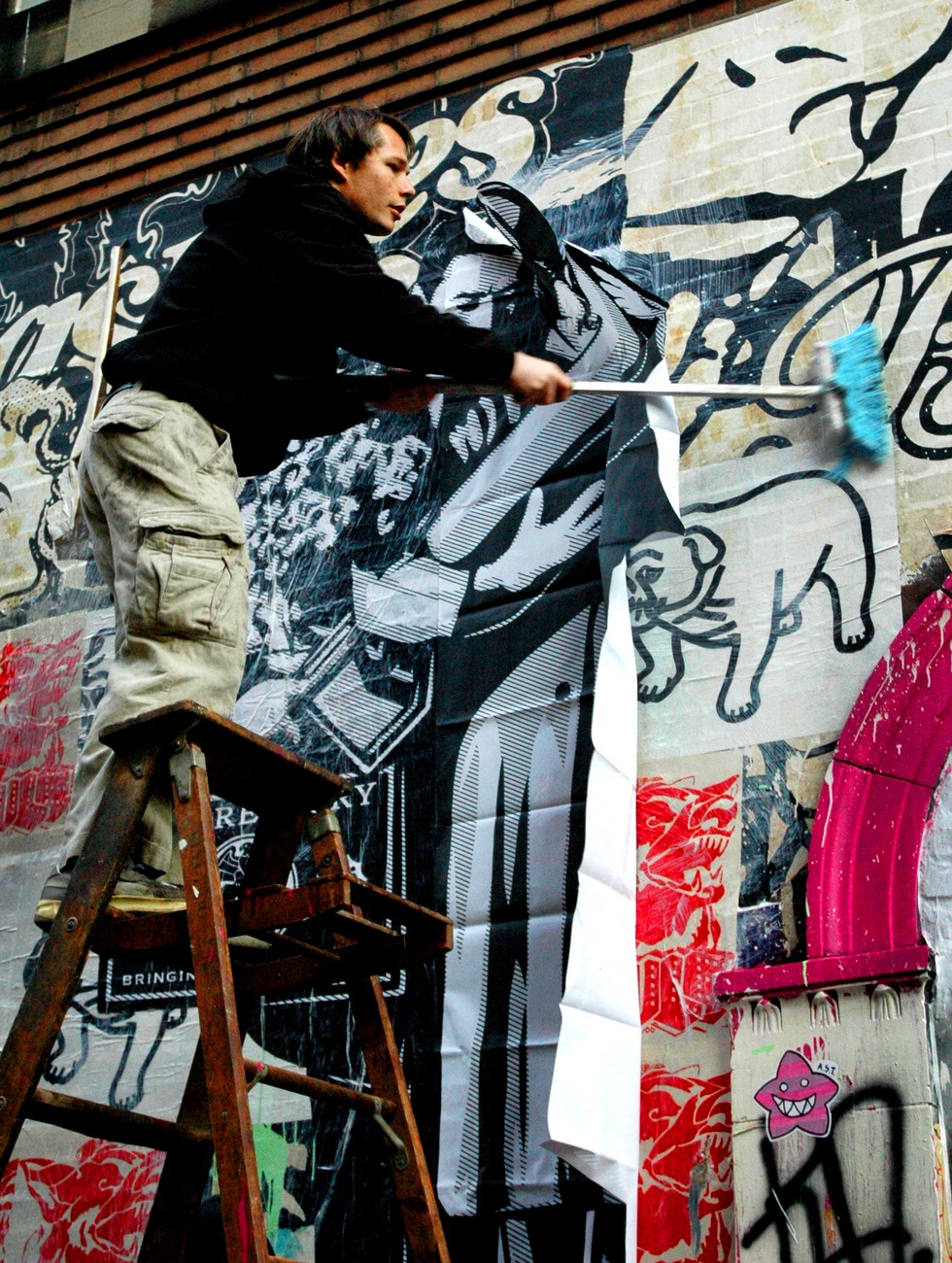 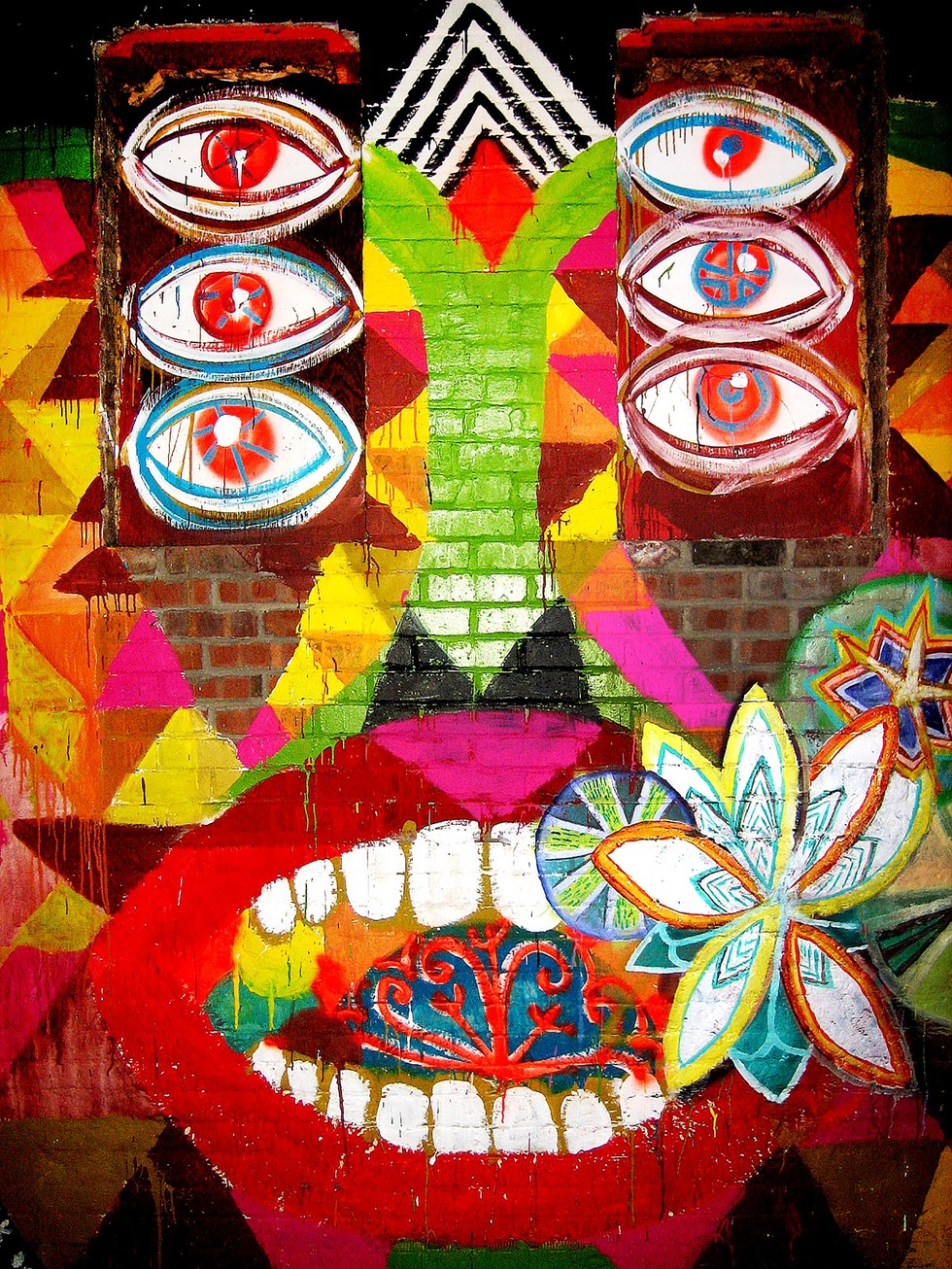 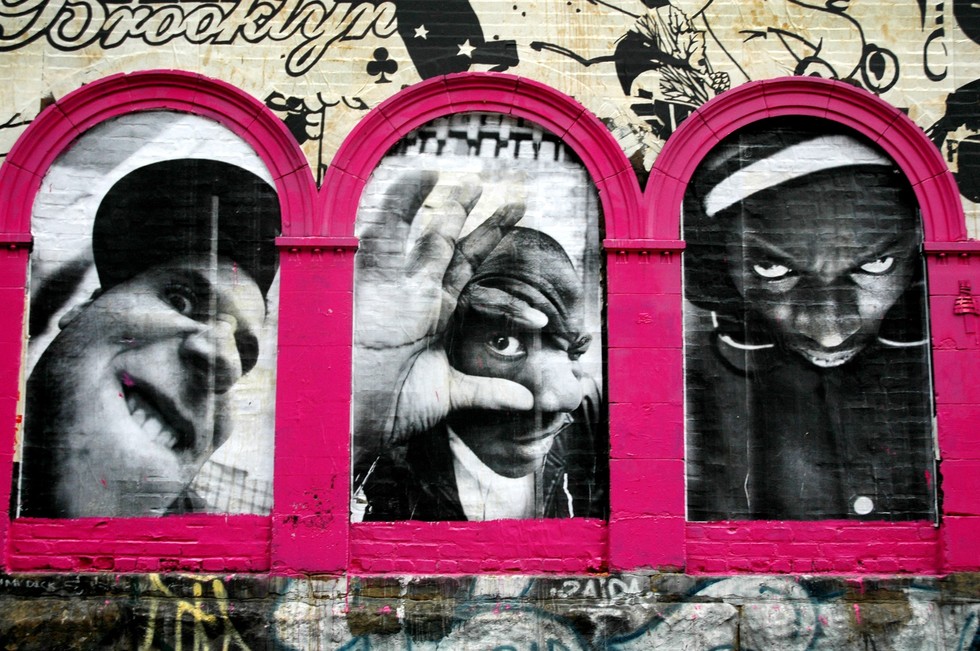 JR, Portrait of a Generation series 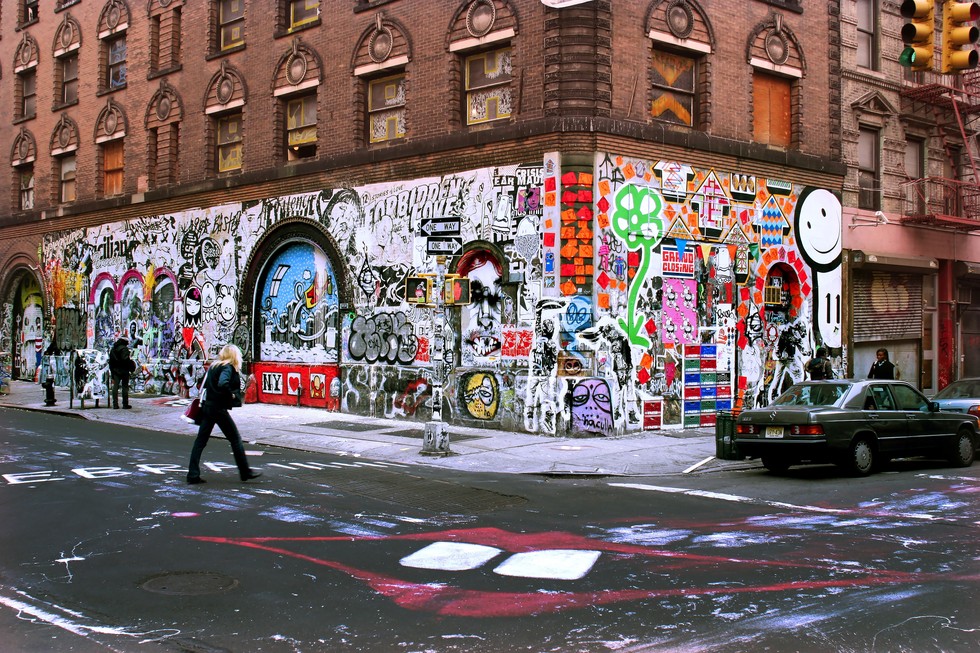 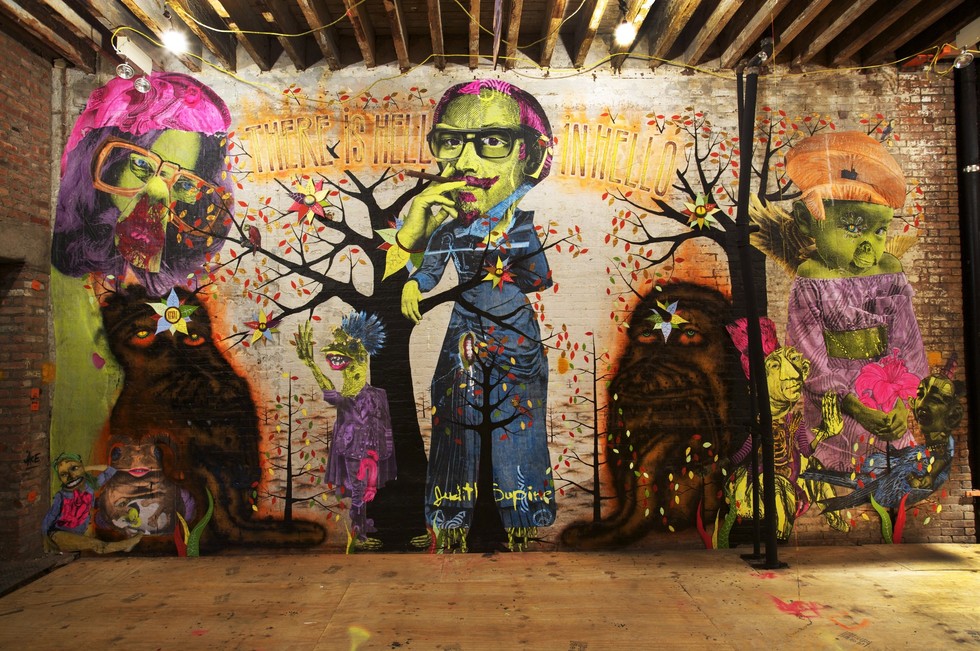 Judith Supine and Davide Zucco (R3KAL), "There Is Hell in Hello" 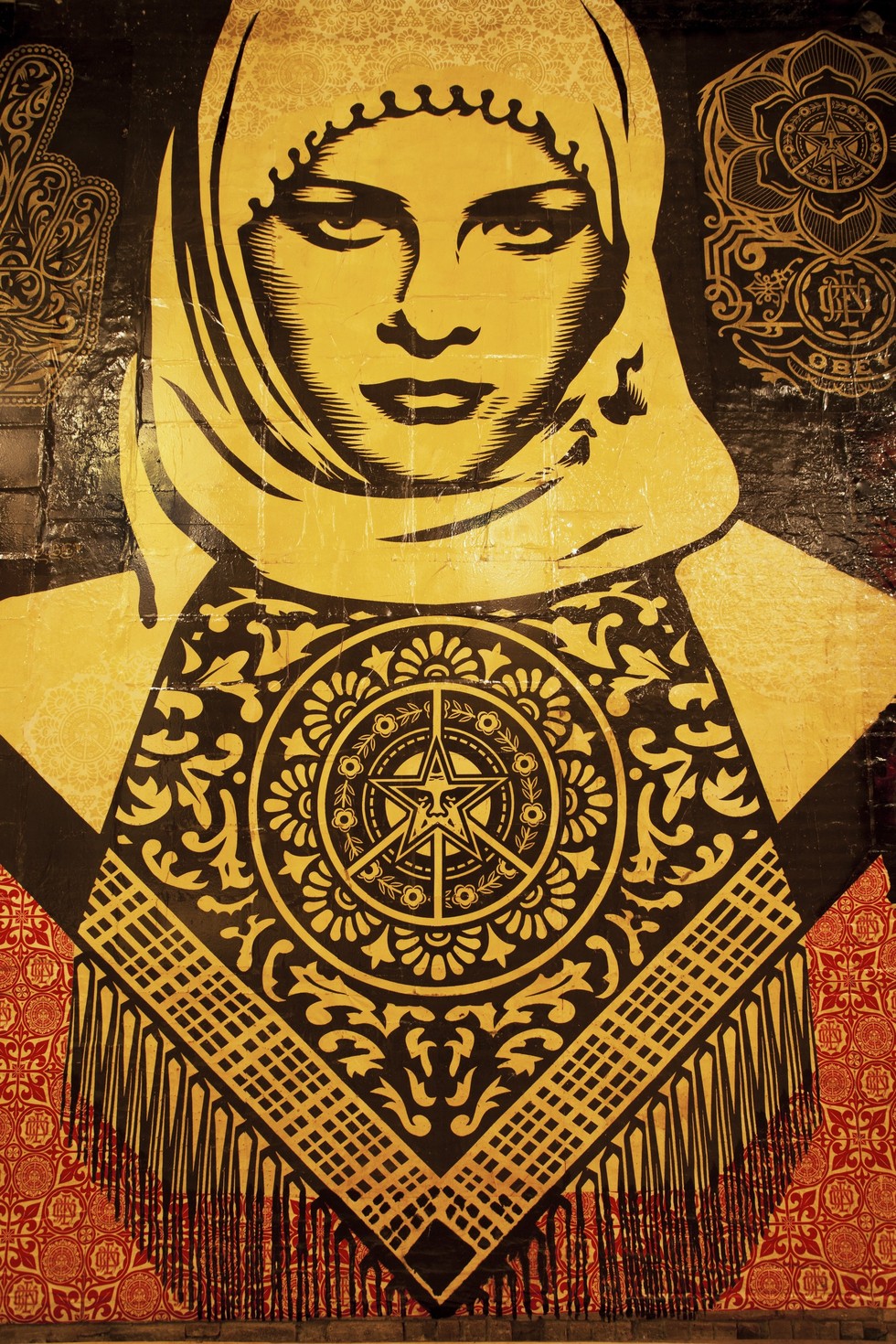 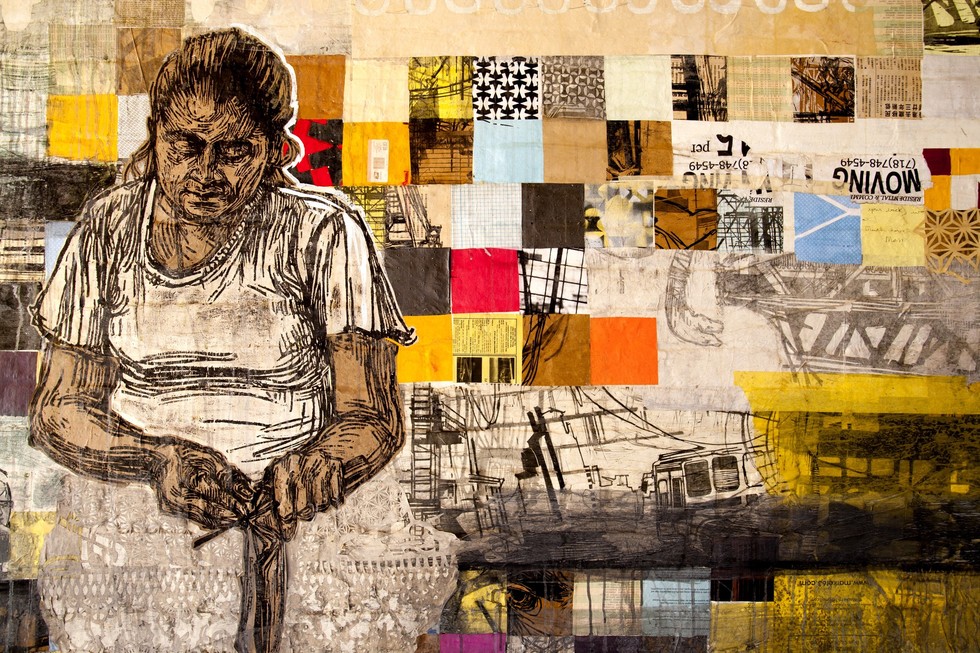 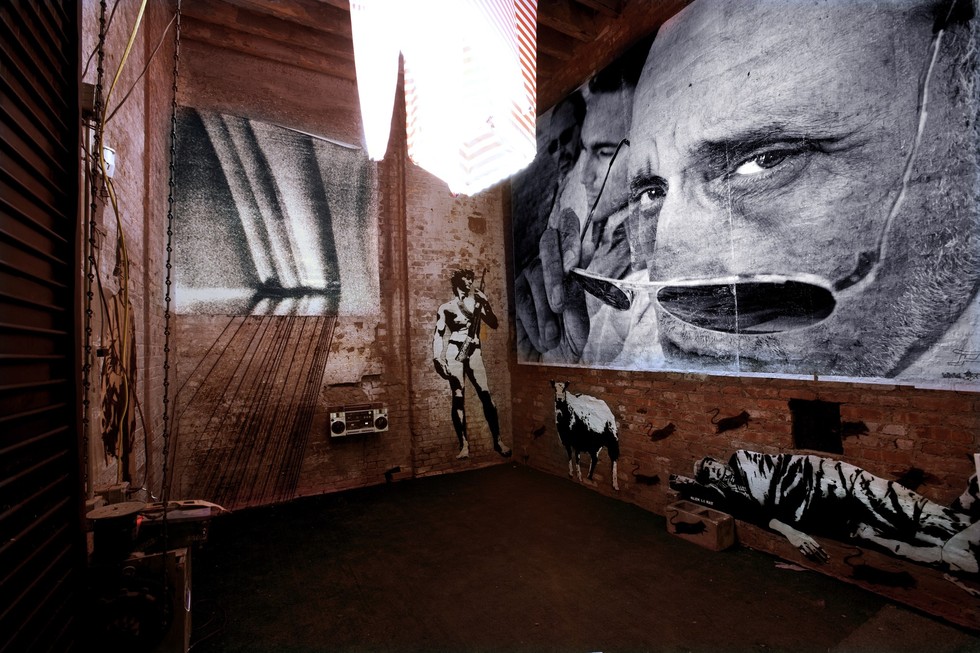 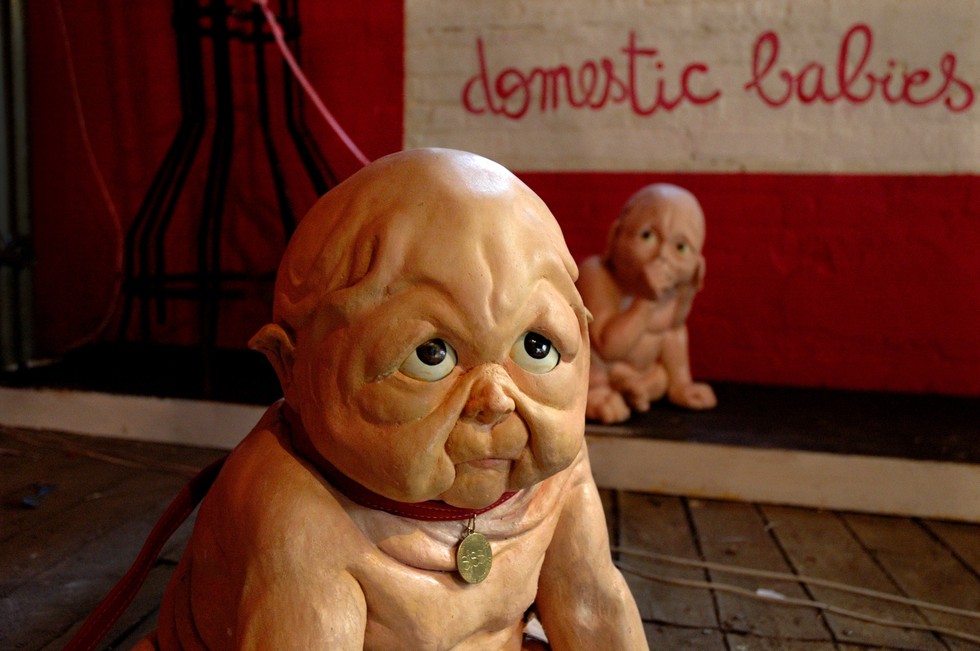 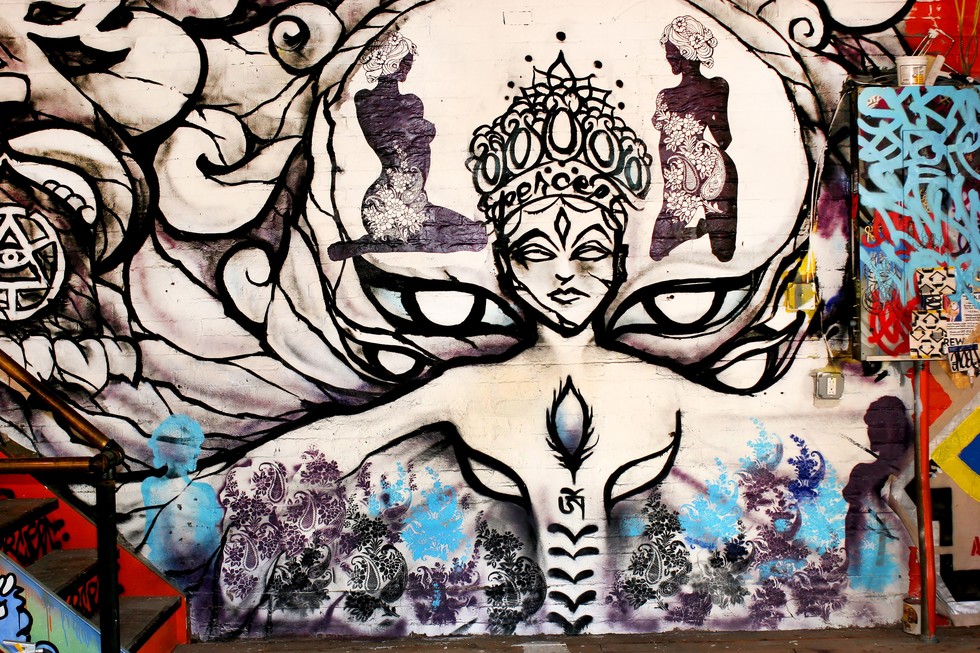 It was sort of a farewell to NYC's street art scene, in a way.

Yeah. We have a photo in the book from the twin artists Skewville and it says "Grand Closing." And we almost called the book that, because in a way that's what it was—it was this grand, incredible moment and the closing of one chapter and the opening of another.

New York has always had a vibrant history of street art and graffiti that's been slowly disappearing--from the graffiti on subway cars in the '70s and '80s to knocking down 5 Points. This time was almost the tipping point of it--going from underground to mainstream.

When I talk about this time I call it the second phase of street art because you had Basquiat and [Keith] Haring and a whole group of artists before, basically in the exact same neighborhood. It just became so popular that mainstream media had to finally pay attention to it. I remember we got a call from some big travel magazine and they wanted the ten best places to see street art in New York City, and it was like, "Well, they're already gone. You missed it." And there's some sadness to it because I think writing on walls is the humanity of the city, whether its graffiti or street art. And people want to see that. No one wants to live in something that's so pristine and so clean that it feels mechanical and controlled. So there needs to be a balance in cities between "real" vandalism and what our street artists do, which is beautify decaying spaces or spaces that are not activated.

I live in Bushwick, and out there you see a lot of art on the warehouses and walls of empty lots.

What the movement really moved to is now a mural movement, because the artists want permission, because they don't want to get arrested. Which still means the pieces are beautiful, but they lost their edge. And any artists that you speak to will say that it is part of the act that you're doing something illegal. It means so much to you—your message, your piece, that location—that you would risk getting arrested, that puts more power and meaning into the art.

But 11 Spring was not illegal, right? You had permission to work in the building.

We had permission and we also got permission from the owner for people to write on the outside. We had seven weeks where the artists did the work on the inside and the outside, and then we opened it up to the public. The morning that we were opening it up, the DYM crew, which is more of a hardcore graffiti crew, came and they pretty much whitewashed the building with their tag in silver paint. But little did we know that, as the line started to form around the building, we started handing out sharpies to all these New Yorkers who were waiting in line and they were writing on the wall. It empowered people who weren't artists and who had never written on the wall to have this blank canvas that they could interact with.

A lot of the artists who participated in the show--Shepard Fairey, Swoon, Faile, JR all spring to mind--now have really successful mainstream or traditional art careers. Was it surprising to see them take that path?

We were not surprised. We had always felt that the artists themselves had a level of talent that was equal to a lot of the other fine artists in the world. But they were artists of our generation, and artists have to grow up. You have to go through a process to get to some point in the art world where you're considered premiere. I think it really hit home, though, when we were in the space and a gallerist came up to us, and he's like, "This is literally a shopping mall for artists." We had another big collector some up to us and say, "There are at least five $1 million pieces on the walls. We've got to save the walls." So, I don't think anyone could deny their talent.

We're a little bit frustrated today that there isn't as much illegal activity on the streets with that power that there was back then. But also, people have kids, they get married, they need incomes. They grow up in a sense and can no longer afford to take those risks. (Although Shepard Fairey is obviously still out there taking a lot of risks.) So it's a natural evolution for an artist that might say, when they're a pure street artist, "I'm never going to sell out," and then to say, "Well, you know what, I can do both. I can figure out how to make this work." Swoon was a great example. She had an amazing gallery show and put the same piece that was for sale inside the show around the corner on the street for free, so everybody could see it. It's an incredible power to be able to do that and still have people buy your art.

Street art is an inherently political act as well--do you think, given the election and the sudden change in the conversation here, that we will see more illegal art rise up again?

I certainly hope so. I think when things swing in a particular direction and you can feel and perhaps see freedom of speech being curtailed, individual rights being curtailed, then it becomes more important than ever to write on walls and have that freedom of speech. We don't realize, as Americans, that there's a lot of countries in the world where they can't do that without extreme risk. We've had other pretty tough moments where we haven't seen people taking street actions, and it may be because people have moved a lot of this into the digital sphere, without fully realizing they'd lost something—perhaps expanding their reach, but losing the power.

Our digital spaces are so curated though--the thing about street art is it's out in our public spaces and you're forced to confront and engage with it.

And that's so critical. I was so surprised Trump won because I don't talk to anyone who would support him—they don't post on my Facebook, they're not on my Twitter. You don't know there's another view or world out there because you're self-selecting and self-curating. But I do think—we saw a Trump piece today out on the street. So I think we'll see a little more. It would be great to really see a massive movement.