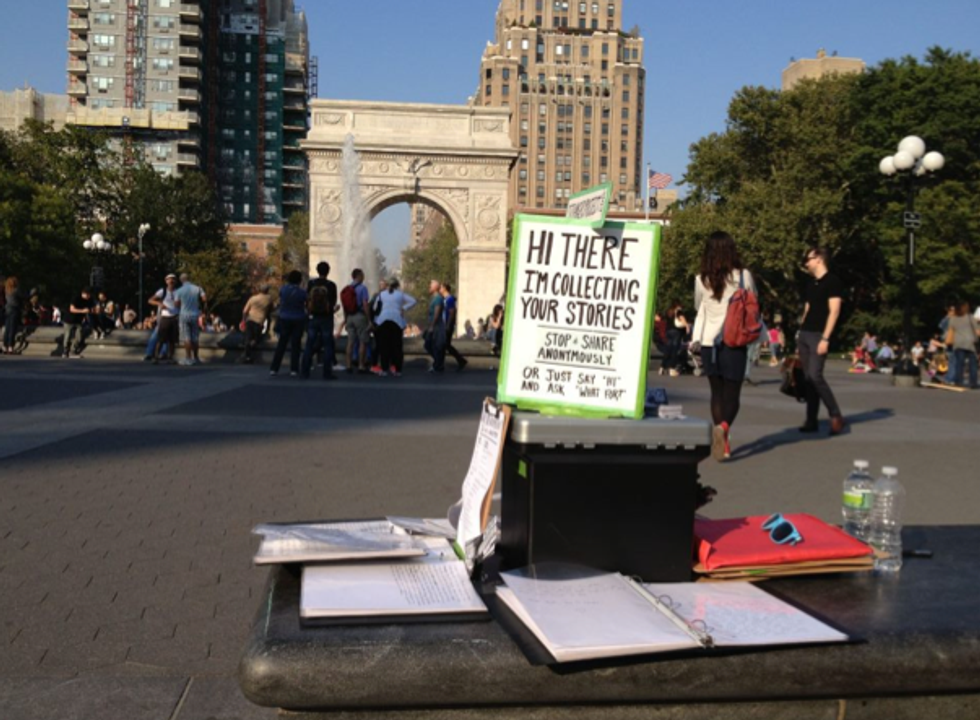 Photo courtesy of The Strangers Project
In a world where we tweet about what we ate for breakfast and Instagram photos of ourselves dressing up our cats to resemble RuPaul's Drag Race contestants, it's not always clear whether all of this sharing -- and making what used to be private, public -- is making our social relationships more intimate or more diluted. We might feel comfortable tweeting mundane details about our lives to hundreds of followers on the Internet but for many of us, the thought of sharing a secret about ourselves with a complete stranger sounds about as appealing as showing up naked to church. And yet The Strangers Project gets people to do just that. Spearheaded by Brandon Doman, the Strangers Project is a collection of over 5,000 handwritten or typed anonymous personal stories from people found all over New York City. (Lately, Doman has been collecting his stories in Washington Square Park.)  Reading the entries cataloged on the site, patterns emerge, with the most popular themes covered including medication, hope, friendship, body image, careers, and travel. We talked to Doman about his favorite spot for meeting strangers and taking his story-collecting international, below. 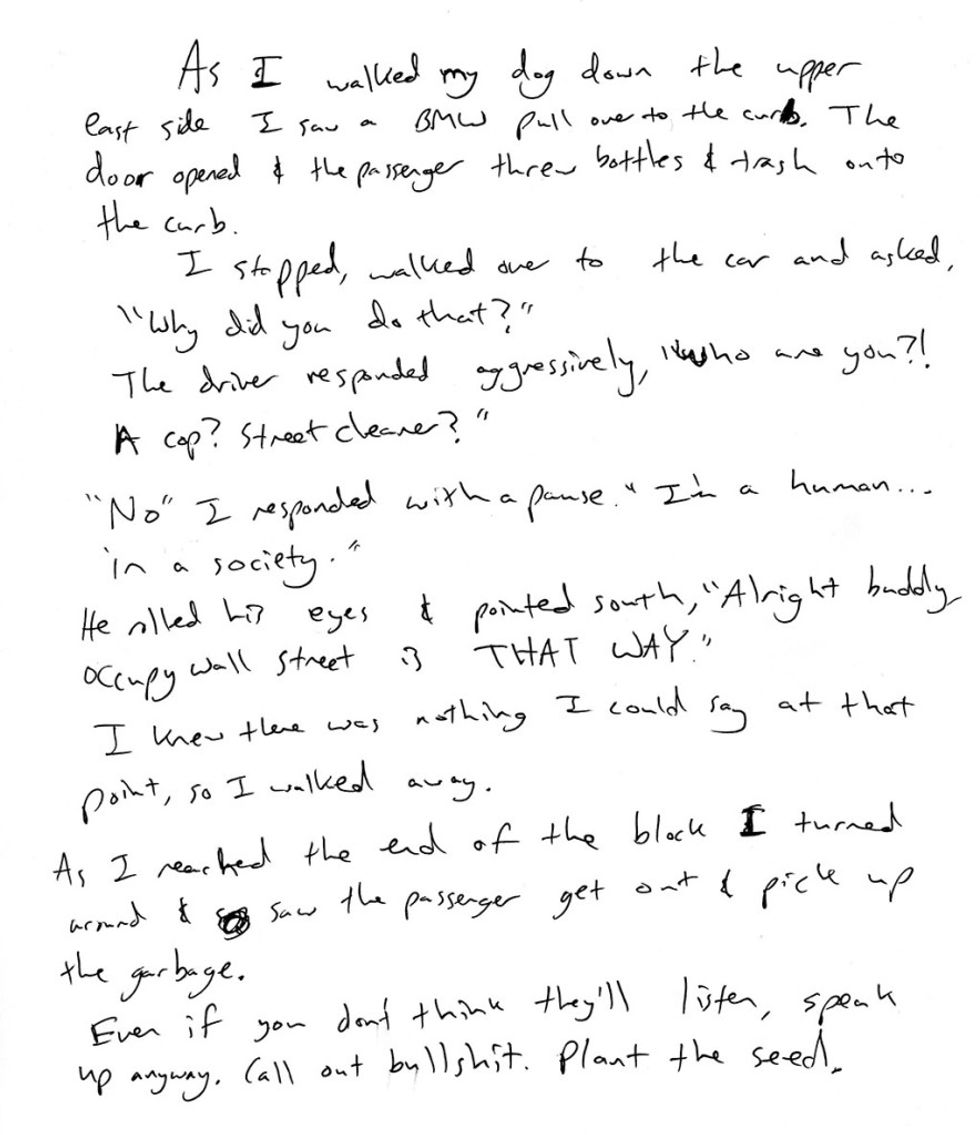 What made you want to initially start The Strangers Project?

I was just out of school and I guess the idea just kind of popped in my head. I didn't [have] any plan for it -- I was just people-watching. [One day] I opened up a notebook and asked people to share. Two women stopped by and asked what I was doing and I told them I wasn't quite sure yet and that was that.
Do you wait for people to approach you or do you approach them?
They always approach me. I always wait for them to hop up into the experience, let them ask questions and read stories.
How many people typically share their secrets with you in a given day?

On a good day I'll end up with 100 or 150 stories in a few hours. You know there are a lot people who are intimidated at first. They sort of stand back and watch until someone else goes first. 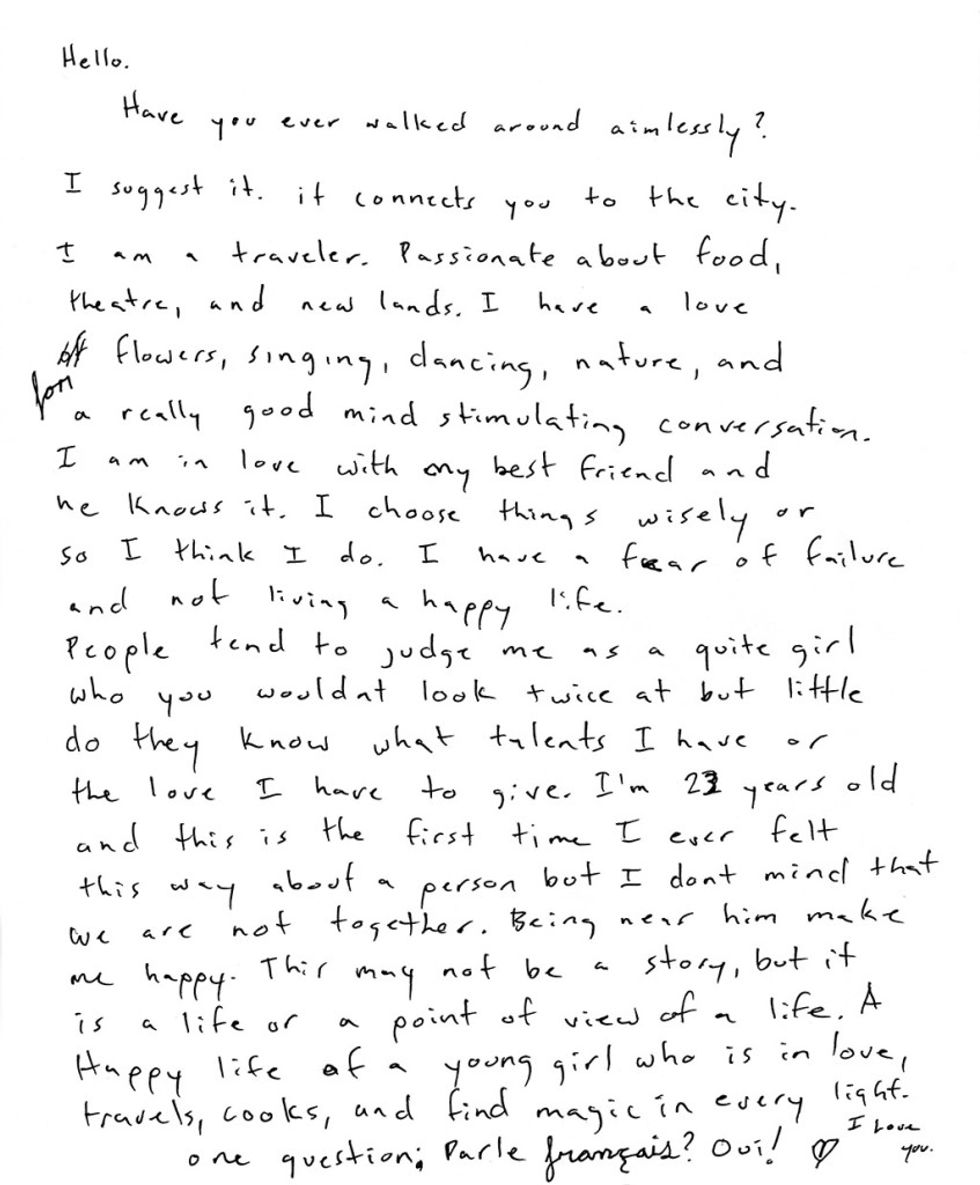 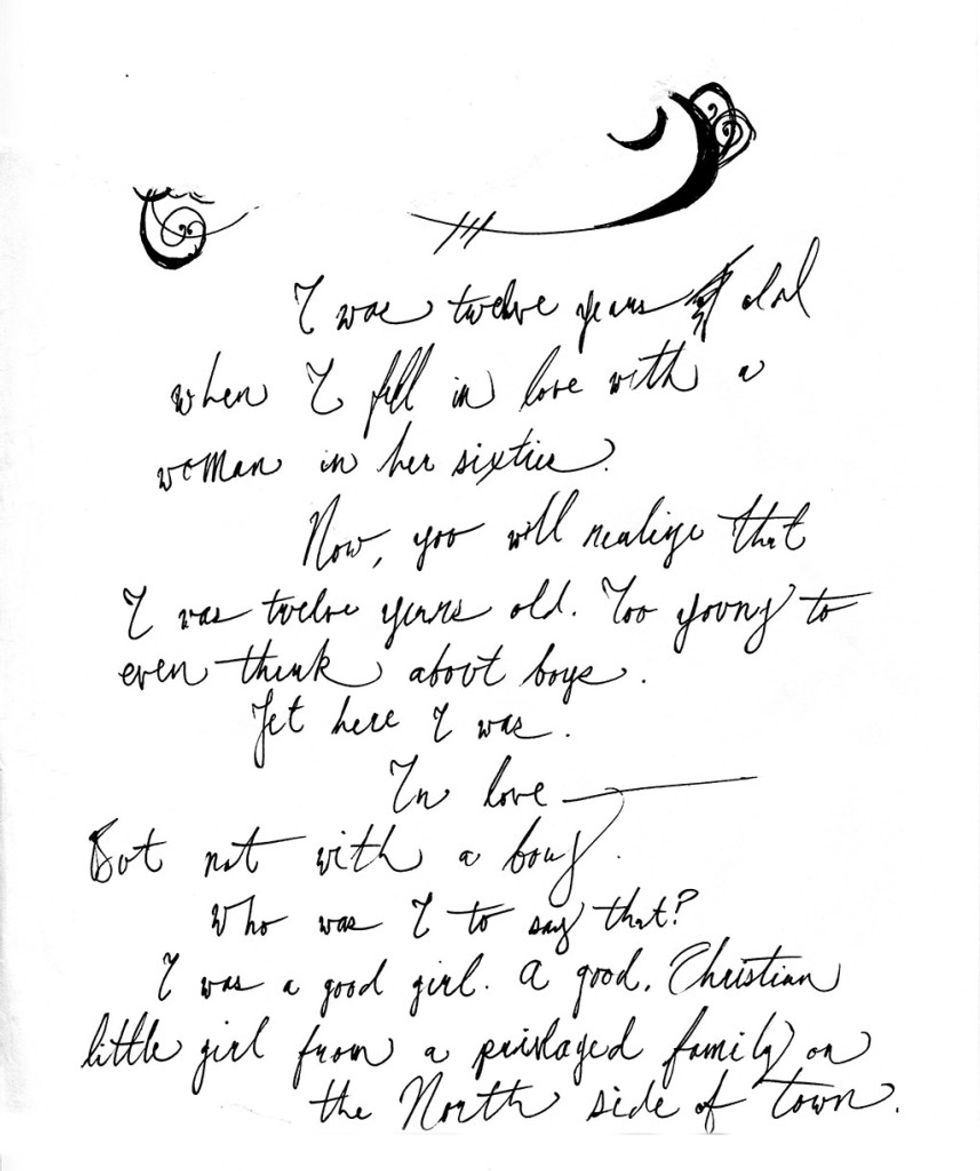 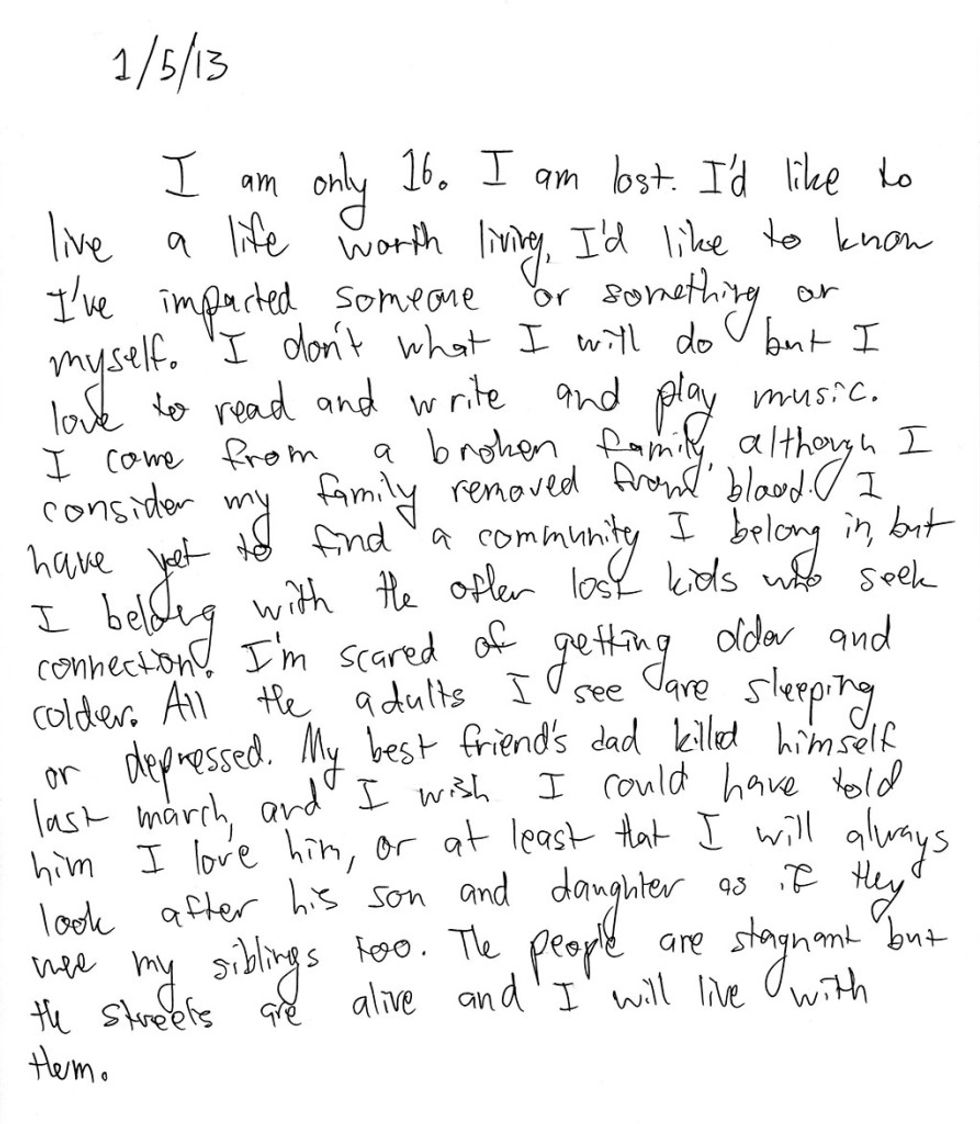 It's surprising how personal and intimate some of the stories are -- some of them feel like they're ripped from diaries.
Yeah, I really built the project in a way that you can take out of it whatever you want. Some people just enjoy the fun stuff and use it as entertainment. Some people use it as a really spiritual thing. But I tell people when they stop by to think of it as a journal entry and the stuff that they've shared has been amazing over the past few years.
Why is it important that the stories remain anonymous?
It keeps people focused on the story. The handwriting is part of it, too. It gives people a space to be vulnerable, a story that they might not have shared elsewhere -- they know that they don't have to be attached to their name.
What kinds of stories do you find most interesting?
I think my favorite stories are when somebody starts writing about one thing -- perhaps something more bland like writing about their day -- and then it turns into a whole different story.
There was one entry -- it was difficult to read -- [from a woman] dealing with some terrible stuff early in her life. She started writing about how she was getting ready to graduate from college and how the job hunt was going to go. Anyway, she ended up writing about a sexual assault that had occurred early in her life and how she was making progress with that part of her life. But it took her a few sentences to really figure out how much she was willing to share. 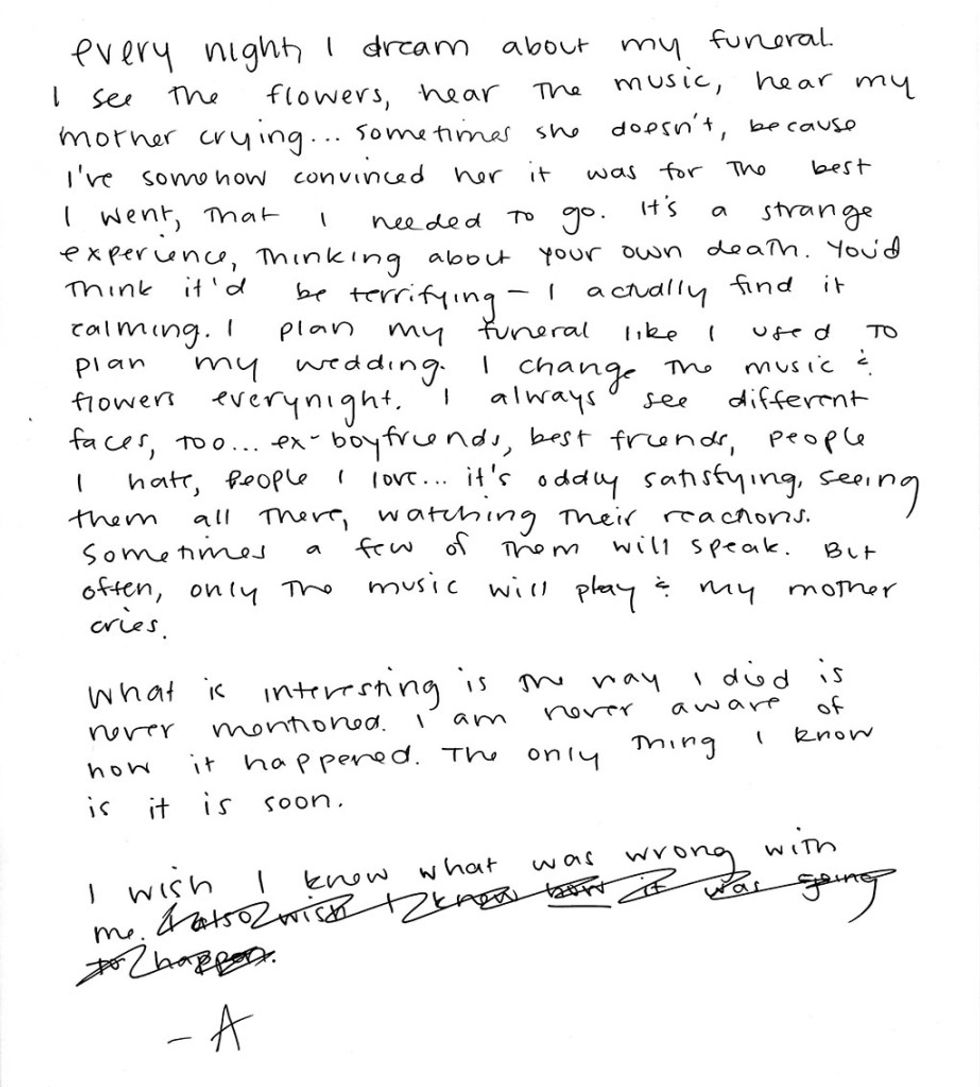 Part of what's fascinating about your project is that in a city like New York, we bump into strangers all the time but never get to know their stories. Do you think the project makes people feel closer or just reveals our isolation?
I think the project is definitely a way to see the world through each other's eyes. And I organized the site in a way that is completely random, which is exactly how the stories all around us are. You might be sitting on the subway next to 50 people and they're all going to have very different stories but we're all sharing this space. And one of my favorite experiences was this older man, probably in his late eighties -- he was very skeptical of the project when he first stopped by but I talked to him, he asked me questions, and he ended up reading stories for almost two hours. At the end of it he mentioned that he forgot that all of these people around him were people, and [even at his age] it was a way for him to still connect with all the strangers around him. I think that happens for a lot of people. I am on the fortunate side of the project where I get to sit and interact with people, which is a big part of it as well. You can never tell what they're going to write just by looking at them before they sit down.
Do you think that the Internet is making us lonelier or more connected?
I think it's doing both. I think it depends on how you choose to use it. I do believe there are a lot of ways to broadcast [information] nowadays but we don't necessarily have a lot of ways to feel heard. [We can] tweet or Facebook post about what we're doing [but] we don't really have as many opportunities to share real things about ourselves.
Where is your favorite place in New York to collect stories? Do you have a path that you can turn to for the best concentration of interesting strangers?
My favorite spot as of now is Washington Square Park. I feel like I get a really wide range of people who stop in there: from students to travelers to native New Yorkers. I just moved here about a year ago so I am looking forward to exploring some other locations, too.
And you're taking the project international? Tell me about International Story Day. How did that come to pass?
Last summer I tried an experiment [because] I wanted to bring other people into the experience. I had a space where anyone could sign up and volunteer [to collect stories]. There were about 25 [people] who signed up and we sent out with all the same materials that we use here -- signs, papers, clipboards -- and we trained them how to do it. We ended up getting around 500 stories around the city on the same day. Afterwards we had a little after-party where everyone sat around and told their experience from the day about the stories that they got. And now we recently launched [sign-ups for International Story Day] and we've already received 300 volunteers from over 40 different countries. We're hoping to even get thousands of volunteers. The idea is collecting global stories and sharing them with everybody else. 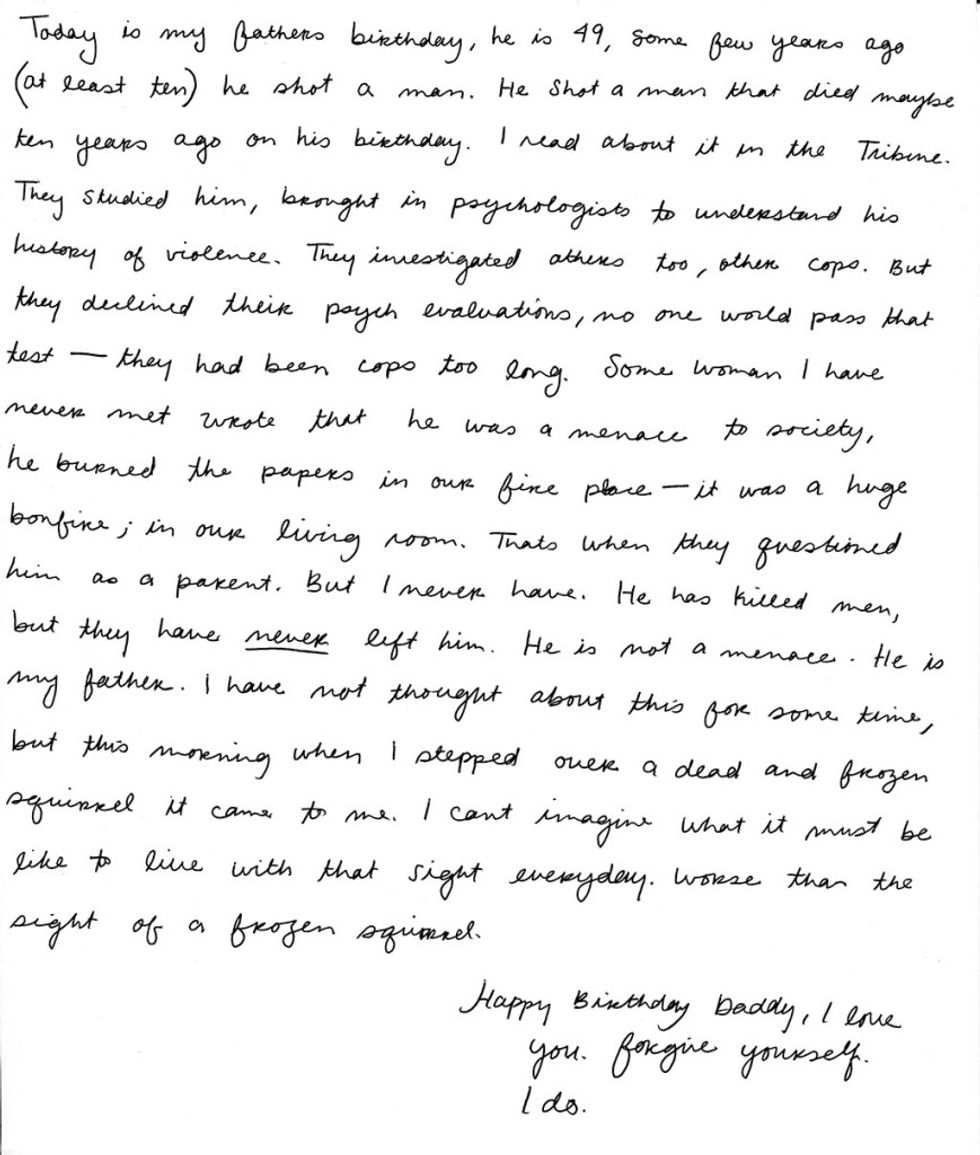 [Via The Strangers Project]

Just So You Know, IDK is Here to Stay