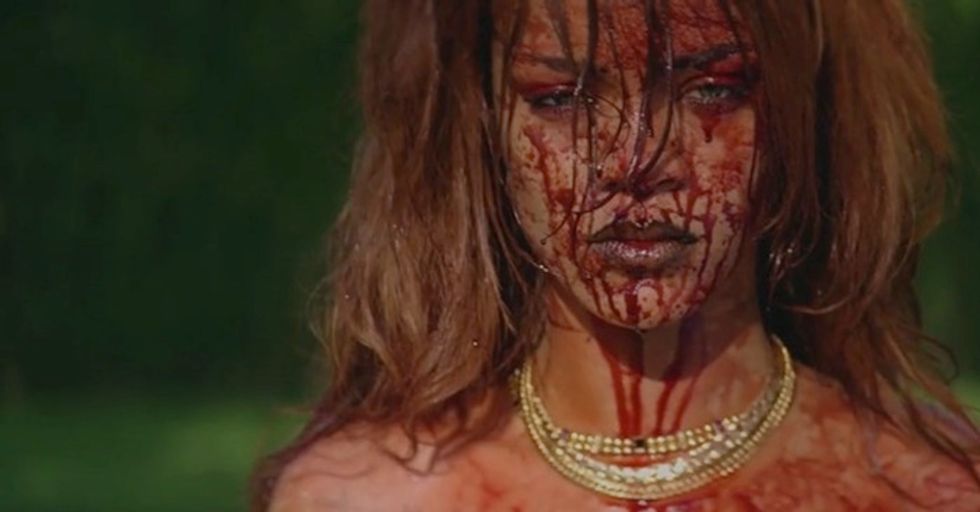 by Sandra Song
PAPERMAG
So the talk of today is obviously Bad Girl RiRi and her NSFW "Bitch Better Have My Money" video, and it seems like a lot of people have decided to weigh in that it's not safe for feminists and glamorizes kidnapping and sexual humiliation, to which we have just one thing to say: not everything a female pop star produces has to be a political statement with a discernable feminist implication.
It can, oftentimes, just be a cool fucking video -- which is exactly what people (specifically men) like Quentin Tarantino, Robert Rodriguez and the long list of (mostly) dudes involved with the Game of Thrones franchise happen to capitalize upon on the reg. These are guys who literally make their living off of making torture porn for the masses, and there doesn't seem to be nearly as much uproar over degrading rape scenes, Kerry Washington getting tortured or that Death Proof car crash scene -- cause Django Unchained is just like, such a game-changing movie, man. And, besides, when it's a dude-on-dude revenge fantasy being portrayed, can you imagine people decrying it as "anti-meninist" or misandrist?
So why hold Rihanna to different standards? Girl obviously knows her cult films Ã  la Carrie, Thelma and Louise, Weekend at Bernie's and The Doom Generation, and if the B film-loving Tarantino, Rodriguez and Araki are allowed to craft homages to these gratuitously gory cultural institutions, then Rihanna sure as hell can, too.
Sure, the naked wife was maybe a tad unnecessary, but isn't it more important to consider that the video says more about her creative agency rather than her purported "anti-feminist" leanings? After all, the mere fact that the woman who directed this entire video is Rihanna herself is laudable -- an action that could even be interpreted as a subversion of these typically male-run narratives that Tarantino & Co. tend to go hog-wild with sans repercussion.

#BBHMMvideo Ya girl got director skillz!!! The concept for this piece came to me 8 months ago!!! So you can imagine how anxious I am right now!!! ð��¬ð��¬ð��¬ #MIDNIGHT on #VEVO