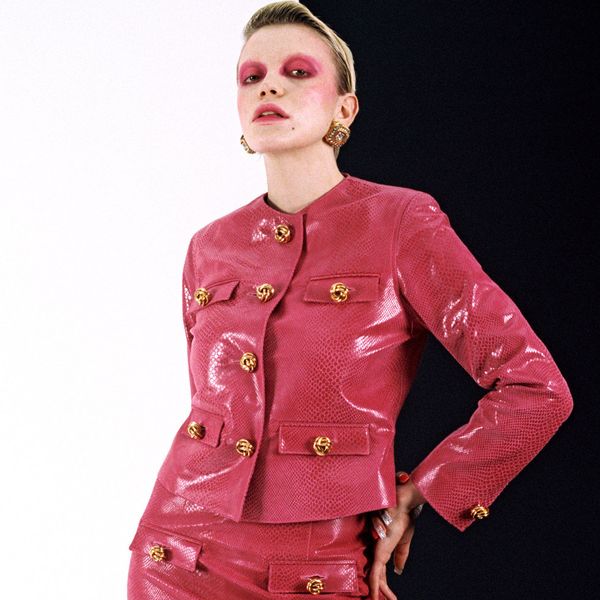 It's not easy to nod to everyone from Heidi Montag to 12th century feminist icons and still create a timeless, cohesive collection, but the 25-year-old British wunderkind behind eponymous brand, Steve O Smith, has done exactly that.

Fresh out of the prestigious Rhode Island School of Design, Smith has been has been quietly breathing new life into London's fashion landscape and has already garnered fans in the likes of burgeoning British pop sensation Rina Sawayama.

His latest collection honors Empress Matilda, who almost became the first woman to claim the English throne after her father, Henry I, death, while simultaneously weaving in references to his forever-inspirations Montag and Marilyn Monroe's box office smash, Gentlemen Prefer Blondes. This all translates to expertly-tailored suits, slinky slips and Jagger-meets-Elle Woods realness.

Check out our conversation with the designer, below, and Steve O Smith's latest lookbook:

What does this collection, in particular, mean to you?

When I started researching characters for the collection I got really inspired by Empress Matilda, who was the would-be first queen of England in the 12th Century. I was drawn to the idea of Matilda because, although she was the rightful heir to the throne, she never managed to be crowned because of her gender and perceived foreignness. It was the idea of Matilda being both powerful and considered "too European" that led me to researching Italian and French tailoring, specifically '50s Dior and '90s Versace. I wanted to combine aspects of the new look and the power suit to make a cut that would pay homage, in a slightly tongue in cheek way, to the idea of Matilda I had in my head.

There are also a lot of mid 2000s references in this collection (and Legally Blonde realness), why do you think Y2K fashion and pop culture is dominating design right now?

Definitely. I thought a lot about the idea of Matilda being too European to be an English queen, so I was thinking about ways to make the clothes look continental. That's where the oversized gold buttons, patent snakeskin and monochromatic animal prints came from, which is what made it look quite 2000s.

What do you make of our cultural obsession with nostalgia? Is it healthy?

I don't know if millennials are more or less nostalgic than previous generations, what's interesting about social media and the Internet is that imagery is king, and often context is overlooked, which can be a good or bad thing.

The Hills reality star Heidi Montag is an unconventional muse. What attracted you to her?

I love kitsch culture in general. I think there was a time when reality stars were considered low-brow, but I'm not sure that's true anymore.

How do you perceive and approach femininity? Who do you hope the Steve O Smith woman to be?

I think of femininity as being multi-faceted and fluid, and I think there's a lot of power in it, which is why the characters I'm drawn to for inspiration are always powerful in some way. I hope that the SOS woman is tough, confident and intelligent, and also has a sense of humor.

More brands are moving towards season-less collections and ditching fashion weeks altogether. What do you make of that?

I think the majority of fashion week is experienced through social media at this point, but there's a tangibility to a show during fashion week that photos don't necessarily capture. In that sense I think it might be a bit like the way people heralded the death of print media a few years ago. Things will change but probably not as quickly or dramatically as people expect.

Similarly there's a growing trend of stealing ideas from emerging designers. How do you, as a young creative, protect yourself?

I try to stay pragmatic about the fact that fashion is an industry. If bigger brands didn't build the overall demand young designers wouldn't be able to participate in an industry that, a lot more than others, actually gives them a chance to thrive.

Ian Jeffrey Is the Next Model to Watch