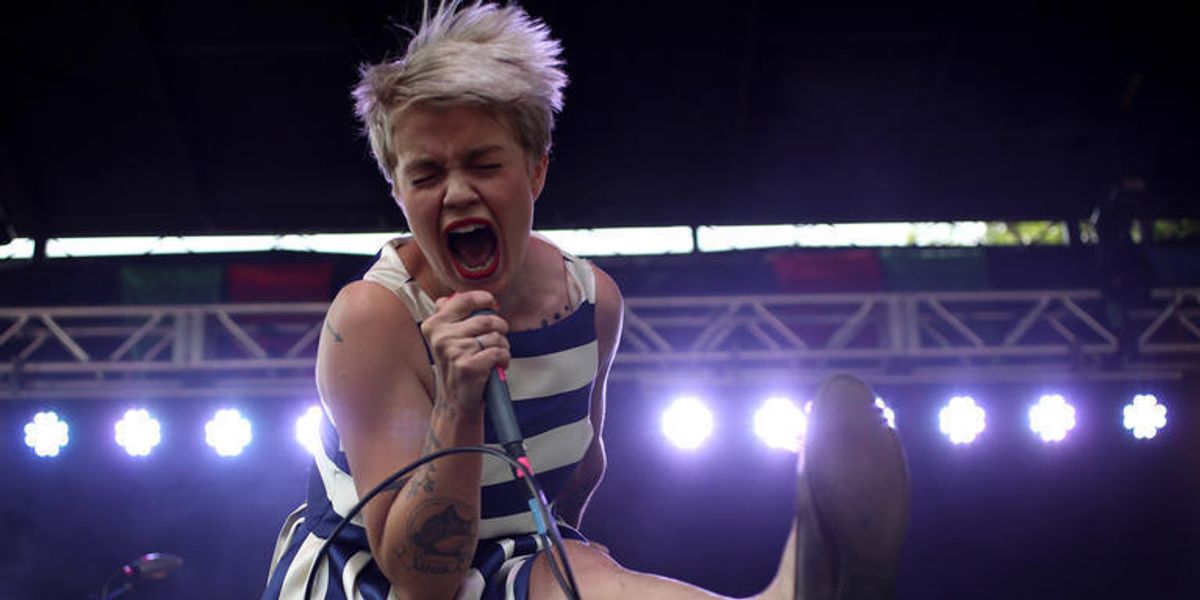 How To Stay Healthy If You're A Touring Musician

It's health and wellness month here on Papermag.com! Below, Perfect Pussy's Meredith Graves outlines how she and her peers stay healthy on tour.


Being a touring musician is probably pretty high up on the list of careers normal people fantasize about between phone calls and meetings. Flying across the world to be met by crowds of kids yelling along with your lyrics, being photographed for magazines, the feeling of doing a sweet hair flip mid-shred. And, of course, the stereotypes: babes, booze, drugs, trashing hotel rooms, free stuff, Almost Famous, we've all seen it. Looks awesome, right?


The reality, for most of us, is substantially less glamorous. Not at all bad (most of the time), just not what one might expect. Take a recent profile of Quarterbacks that, though conceived as a fairly run-of-the-mill tour diary, quickly veered into long-faced poverty porn: what do journalists think young musicians deal with on the road, if not spaghetti dinners and sleeping on floors? Just because a group 'generates buzz' (which is about as fiscally sound as "exposure" in terms of its relationship to actual money) doesn't mean they aren't making $43 a night, surviving on Chex Mix and bungeeing the trunk of their van shut.

Even for the road-hardened among us, these factors can add up, often resulting in physical and emotional illness. It is heartbreakingly easy to get sick on tour, and once you're sick, because of the conditions you're living and working in, you're very likely to stay sick-- and pass whatever creepy bug you've got on to your bandmates.

But we're a resilient bunch, even when the cards are stacked against us. When you ask around, the same tips and tricks pop up over and over. Hydration, nutrition, sleep, silence, and hygiene seem to be the five tenets that everyone agrees upon, though they take different forms for different people based on their needs.

Sadie from Speedy Ortiz distilled (no pun intended) her advice down to "Gallon o' water a day." In fact, "drink a lot of water" made every person's list, and it's not surprising why. Water oxygenates the blood and strengthens the immune system. It helps your kidneys flush out toxins, and helps keep the mucous membranes in your nose, mouth and throat functioning-- very important for vocalists, especially people who scream as well as sing. It also helps with digestion, which is great if your diet primarily consists of gas station snacks and you get no exercise because you're stuck in a van all day.

What happens when you're confronted with every beverage in the world except water? Shows often happen at clubs and bars where your band will likely be plied with bottles of liquor, cases of beer and/or drink tickets to ensure a good time and a fun performance. Almost every musician I spoke to, especially the vocalists, stressed the importance of avoiding alcohol as much as possible despite its omnipresence-- "Don't drink alcohol until you're done playing; it isn't going anywhere," as one friend put it.

And what of those among us who might be in recovery from alcohol or substance addiction? One friend who is in recovery told me they try to make it to meetings in different cities instead of hanging around clubs where alcohol is present, but in lieu of that, being held responsible can help. "There's always a small network of musicians in recovery on the road at the same time and we generally try to check in with each other throughout the day. I make it a point to go for walks during gigs to clear my head and to check in with my sponsor & my sponsees back home."

Nutrition is possibly the most inconsistent aspect of tour life. We've all heard tales of mythical bands who frequent grocery stores and haunt Whole Foods, crafting raw vegan meals at rest stops, but most of us seem to survive on a steady diet of granola bars, beef jerky and cheap orange juice. Michael Berdan, currently of Uniform and York Factory Complaint and formerly of a zillion other good bands, says he takes multi-vitamins and B12 supplements in addition to staying hydrated and "[eating] as much by the way of fruits and greens as possible. I would be lying to say that I avoid meat and grains entirely, but you know…"

A lot of musicians supplement their diets with homeopathic and holistic compounds while they're away. One friend, the singer of a truly great hardcore band, relies on echinacea-heavy Wellness Formula. Paul Krolian of Expert Alterations swears by a strange brew of "echinacea, ginger, garlic, cayenne pepper, lemon, and apple cider vinegar. It's gross. It works." This is similar to what's traditionally known as Fire Cider, which I've also used to great effect-- be extra careful when grating horseradish, though, as it makes your eyes feel like cutting onions times ten thousand. And if you ever wanted to know what the Speedy Ortiz van smells like, know that Sadie suggests "raw garlic until your bandmates hate being in a band with you."

Who needs it, especially when all you want to do after a stressful show is drink and scroll through Instagram? Sleep keeps your brain happy and your body functioning at maximum capacity, and when your average daily schedule is nine hours in a van before five hours at a club before five hours of sleep (maybe) and then nine more hours in a van, it starts to wear on you. Sleep should be prioritized, which is super hard when you basically go to a party every single night.

Like water, everyone I spoke to mentioned getting good sleep as one of the key elements to surviving a tour of any length. Joe D'Agostino, singer of Cymbals Eat Guitars, swears by sleeping "as much as you can, at the expense of your social and personal life if you have to." If you aren't well-rested you'll have a breakdown at the first sight of a flat tire or surly door-guy.

More than likely, especially if this is one of your first few tours, you're playing houses and sleeping on floors, which starts to wear on your body faster than you can count sheep. Pain will prevent you from playing as well as you can on stage, and a stiff neck and sore shoulders will make you act like a bastard to your bandmates. Jesse Amesmith, in addition to being an ace yoga teacher, is also the singer and guitarist of Green Dreams, and she's been known to lead band yoga sessions on long tours. She's created an incredible Van Yoga video that should help with any residual hangovers or lower back pain from another night on a dirty carpet.

For vocalists, no matter how safe you are at your shows or how well you warm up, long periods of silence are essential to surviving tour. Don't fear seeming standoffish-- one friend insists on not talking to people at the venue if loud music is playing on the grounds that "nothing is that interesting" (this goes double if you're in a state where smoking is allowed in venues-- though I've found that many venues will accommodate a request that smoking be forbidden in the room where bands are performing if the layout allows). Even whispering can harm your voice, so do your best to be completely silent if you're trying to save your vocal chords.

Silence is also necessary in the form of quiet, no matter what role you play in your band. Giving yourself time to mentally recharge is essential to your psychiatric well being when you're living in cramped quarters with the same five people for weeks on end. Berdan suggests "fifteen minutes worth of guided meditation and repeated breathing exercises throughout the day, in particular right before our set."

Joe may put it best when he reminds us that it's good to "be mindful for as much of the day as you can. If something starts to annoy you or upset you that you can't do anything about, try to remind yourself and be conscious of it, and the mind-body impact will lessen a little. If it is something you can do something about, then say your piece and move on. And don't fret about a show that's over. It's over. Next!"

This one seems like a given until you factor in the time constraints forced on touring bands. You might not have time to shower at the hotel if you've got an early van call, and depending on where you're staying, you might not want to use the shower at all. Basic hygiene rituals like showering and brushing your teeth should be prioritized, even if they're sink baths at gas stations and spitting toothpaste out the window. They're humanizing practices, and can put you back in touch with your body in ways that might make you more conscious of your mind.

For vocalists, one friend recommends bringing your own microphone to cut down on the spread of germs. Though I'm guilty of not doing this, I will never forget an article in Maximumrocknroll's health issue from many years back about a singer who got large herpes lesions all over their cheek from a microphone at a house show. Which reminds me, I should probably get my own microphone.

Air travel, where you might be in constant contact with the same strangers for 32 hours on end, is another matter entirely. If you're flying overseas, as Matt Whipple does with Cymbals Eat Guitars, "don't touch anything on the plane - tray table, armrest, seat belt - and bring hand sanitizer if you have to. Don't touch your face. The idea of aerosolized cold bugs is wildly overblown. We catch germs from surfaces."

HAVING THE WHOLE BAND ON BOARD

The best (and most difficult) way to maintain a state of health and stasis during a long tour is to get your whole band on board with adopting healthier practices. This could mean working on communication techniques to lower stress (or doing more advance work like making a tour binder or using MasterTour so questions and confusions can be eliminated on travel days), making an effort to go for walks or do van yoga, collectively deciding to visit co-ops instead of fast food places, or shouldering the burden of finding safer spaces to stay in different cities.

As Joe said, "tour is a series of battles you have to wage every day and night, especially when you're the front person." Knowing your bandmates are in your corner will make it seem less daunting and more like the famed magical mystery tour. A healthy sense of friendship, love and understanding will ensure that period cramps, head colds, and psychic meltdowns become funny stories within the next six months, instead of police blotter-fodder. And that's why we signed up for this batshit life anyway, right? 'Cause it's fun?