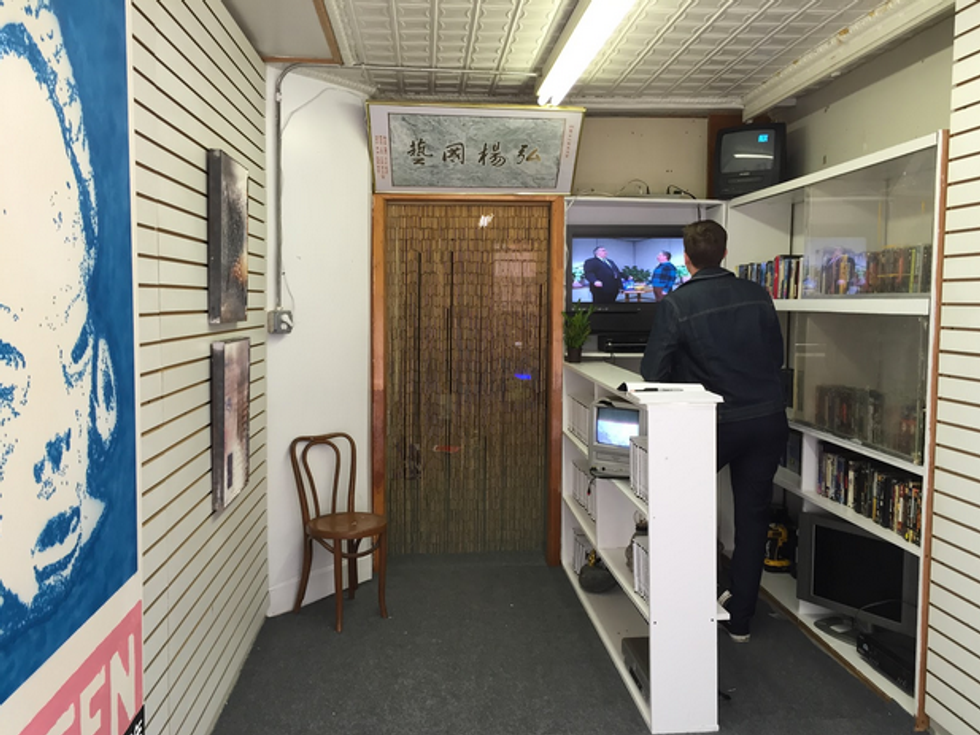 Static Youth to Sonic Youth: Everything We Saw and Heard at This Week's Art Events (Incl. Kim Gordon)

by Kate Messinger
PAPERMAG
New Release showing at the revamped video store at 60 Mulberry Street in China Town, photo by B. Thom Stevenson
Wednesday night in the heart of Chinatown a small storefront with grimy windows reading "Arts and Performance Space VIDEO" opened its doors for the first time in ten years. New Release, an art show curated by Half Gallery director Erin Goldberger featuring paintings and sculptures from artists Phillip Ashley and B. Thom Stevenson, welcomed the LES art crowd, as well as some curious neighbors, into the revamped video rental store. Inside, guests wandered around a room featuring a case of VHS tapes, mini TVs playing static video, a beaded curtain and even an Adults-Only section in the bathroom, taking in Ashley's and Stevenson's works along with a number of  short videos made by contemporary artists such as Jeanette Hayes, Leo Fitzpatrick, Peter Sutherland and many more, transferred onto VHS and playing on a big screen in the space. Many of the artists who had given videos were in attendance, including Hayes and Fitzpatrick, as well as familiar art world faces like Bill Powers and India Menuez. But the space had an intimate neighborhood feel unlike most art openings, with a group of young skaters doing ollies on the street and a relaxed crowd that just wanted to hang out until closing, talking to their friends. It was almost as if we were back in 1992, except everyone had iPhones and the skaters, in bourgeois Millennial fashion, were drinking rosÃ© instead of Budweiser.
Inside New Release, painting by B. Thom Stevenson, photograph by Erin Goldberger

Thursday night came with a change of scenery, on the clean streets in Chelsea and white walls of 303 Gallery. We'd come to check out  Design Office: The City is a Garden, Kim Gordon's new solo show at the space. Gordon was in attendance and she spoke of her sculptures and paintings that commented on the beautification of New York City. Fake plastic hedges were placed among crumpled canvases, each with the names of high rises or building developments scrawled across them in Gordon's signature dripping black text. "I don't live in New York any more so I have fresh eyes" Gordon remarked, seemingly unenthused to be talking about her art in front of so many people who just wanted to ask her about her music. "I keep seeing all this greenery and with it, these giant co-op buildings. It's nice, but at the same time it creates an environment for people who aren't actually living in NYC.... It's inviting consumerism. And art is part of that process."

Kim Gordon, Design Office: The City Is A Garden, Installation view, 303 Gallery, 2015
Gordon apprehensively took a few questions and when the talk was through, the group cheered as if she had just performed "Teen Age Riot" at Lollapalooza in 1995. Rolling her eyes she tried to avoid the fans who wanted her signature on their fresh memoir copies. We wished we could've whisked her off to Chinatown where, in a past-present hybrid, a video store on a gritty street was playing Clerks on the big screen and the rosÃ© kept flowing.
You May Also Like
Beauty