It's nearing 4 a.m. on a recent Saturday morning, and all the Malibu party-boy-turned-chief-provocateur of Angelino rockers Whitestarr wants to do is curl up on a large leather couch and rest. And though Adler repeatedly mentions how badly he'd like to be beside his gal pal of four months (OC nymphet Mischa Barton), he'll have to make do with a new bedfellow: a pug named Gizmo.

The Killers' Hot Fuss blasts. Sportscenter plays on a 50-inch plasma TV (one of three!) in the den of a fancy Midtown pad owned by Whitestarr's label Contango Records. (We've never heard of it either.) Friends of the band and Whitestarr guitarist Rainbow Jeramy Gritter sip Bud Lights as Cisco sleeps spooning his pug. Rock 'n' roll is exhausting. And, at this point, kinda cute.

But four hours ago, Adler (whose father Lou directed Up in Smoke and produced The Rocky Horror Picture Show), Rainbow, drummer Alex Orbison (son of Roy), and stage dancer Tony Potato were all piss and vinegar, gliteratti braggadocio and superstar swagger.

Potato: "People who talk about cocaine don't do cocaine."

Adler: "The only people who watch our shows are girls I fucked."

When we first meet, the boys are huddled together in the shabby backstage area of new velvet rope-cum-rock club R&R. Chairs in various stages of disrepair form a circle around a makeshift two-foot tall table with some empty bottles of Bud Light (the evening's beverage of choice).

As dank as this back room is, the club's main space is quite decked out: cushy cubic chairs and monolithic tables boasting top shelf vodkas sitting in sterling ice buckets and girls dancing on said tables. The newest endeavor by Snitch co-owner Mike Diamond, R&R is an oddity for music venues. Located across 14th Street from Lotus, R&R boasts a velvet rope, big bouncers, miniskirted floozies and their diagonal shirted brethren who all litter the entrance. Indeed, the club fits well in the Meatpacking District. But how much these fancy nancies care about new bands remains a mystery to those like us more accustomed to finding up and coming acts on the Bowery. Ask Diamond to compare his new palace to the likes of CBGB and the Bowery Ballroom and he'll likely call the others "absolute trash" in his Aussie drawl.

However, R&R's backstage area does invoke a certain CBGB-style punky squalor. Maybe this is why R&R could succeed. For all its snobby swank, at its core-behind closed doors-beats rock's true dirty heart. Regardless, this is where Whitestarr is trying to break big. Tonight they're playing at R&R as part of their fortnightly, fall residency.

The band hits the stage around midnight to overpowering cheers. It seems we're alone in not knowing the act prior to tonight -- after all, two years ago MTV pegged them a "Band to Watch." (Ha.) Guys nod along and gals scream at every sweaty slither Adler and Rainbow make onstage. Orbison keeps the beat. Potato jiggies about in the back, occasionally leaving stage to change costumes and drink more. (Think John Belushi dressed in a spaceman jumpsuit.) Propped up with his bass on the R&R stage for 45 minutes, the set will mark the only appearance this evening of the band's fifth member, Damon Webb, who spent the rest of the night sleeping and reportedly vomiting from last night's party. And yet Webb's hangover from hell doesn't seem to hurt the music. In fact, it probably complements Whitestarr's aesthetic. For all their lavish Malibu living, Whitestarr's a dirty band.

Those pics making the supermarket check-out line circuit of an unkempt Adler sitting poolside by the porcelain pixie that is Mischa Barton make for a fitting image given his group's sound: greasy white-trash rock with the gleam of L.A. glam.

"My hair's not that stringy," grumbles Adler. "They always show the worst pictures of me. They never did that to Brandon [Davis, Barton's ex]." Probe a bit more as to why that may be, and Adler shrugs, "I don't know." It's an expression of more disarming chagrin than PR-savvy brush-off.

Spontaneously, Adler knocks over the tiny coffee table at the center of the room, and playfully snarls, "I'm rock 'n' roll!" But rather than flying, eight or so unbroken beer bottles roll around. Rainbow picks each one up and places them nicely on the table again. Indeed this is rock 'n' roll -- Romper Room style. (Clean up after yourselves, kids.)

For all their rambunctious bluster, the guys surprisingly exhibit rare flashes of authenticity and seriousness. Rainbow may jest about how "blowing your AA sponsor doesn't help the sobering process" before frankly discussing with Orbison the group's struggle with addictions. It's strange, but the longer one spends with Whitestarr, the less drunk and drugged they appear. Rainbow and Adler say they keep the drinking to a minimum before playing. Orbison only drinks bottled water. Meanwhile, Tony Potato seems perpetually plastered.

By one in the morning, the show ends, and everyone returns to the back room. Adler, looking a bit cranky, holds some ice to his hand. Ask him how he thought the show went, and he solemnly confesses, "I punched a drawer." (Hence, the ice.) Rainbow enters and offers the guy a hug. The mood lightens, and the evening wears on. A conga line of 40 now heads out of the club and piles into an Escalade limo courtesy of one of the group's seemingly multiple benefactors, a guy named D. His claim to fame among this crew is that he once lived in L.A.'s posh Roosevelt Hotel for 53 weeks straight. Or was it the Chateau Marmont? For some reason, this debate will rage on throughout the night. It all sounds fishy, but the three black AmExes he brandishes about make his story hard to refute. Regardless, this limo is comfy. It has strobe lights and a mirror on the ceiling.

Besides the label heads, D. and a rail thin guy named Shwayze (Whitestarr's guitar tech), Rainbow claims he doesn't know who his fellow limo-riders are. But we do know one attends Barnard.

Shwayze: "You're in college?" (He removes his arm from her shoulder)

We disembark on 27th and Tenth Ave. Head to the front of Home. Immediately it's clear this crew's not getting in. We try Bungalow 8. Same result. No one's happy. The group disperses in front of various other clubs. After a disappointing set (his words, not ours), Adler just wants to have a good time. But he can't -- social obligations. Watching him move up and down 27th street, you could feel his frustration with each stomp. Add to this Adler's increasing need to pee, and, suffice to say that he's unhappy. Running with a group of 40 people is not the best way to get into a club -- no matter how rich your dad is, no matter how down you think you are with the bouncer and no matter how famous your girlfriend is. If one gleans any moral from this night, it's that during a urinary emergency, trying to get into Bungalow 8 to use the WC may not yield success. Try Starbucks.

Here's a band with nary a release, (their full-length debut's due out next year), signed to some I-bankers' boutique label, and they're already bogged down by hangers-on. After an hour, Adler finds a bar to relieve himself. Then the group gives up and moves their squabbles back to the limo. One of the label guys suggests going to his "office" which, we're told, is a 5,000-square-foot-plus loft stocked with drinks and an awesome stereo system. Adler, now unabashedly grumpy, scoffs at the idea. He looks tired and upset. And so he makes his move.

With the limo headed downtown but stopped at a red light on 14th Street, Rainbow suddenly opens the door. He jumps out with Adler, D. and D.'s lady friend behind. They motion for us to follow, which we do. Everyone in the limo looks stunned as we hail a cab, and that's that. Farewell Escalade. Hello pugs and plasma TVs, Sportscenter and sweet Mischa dreams.

At the Midtown flat, after all the hubbub (or was it just promised hubbub -- because other than R&R, we never really went anywhere?), this part of the night is more relaxed, more intimate. Indeed, there is a lot of hugging amidst our Buds and basketball highlights. Adler and Gritter like to hug. A lot. At first, it's quite unnerving. A bit awkward. Are they a bunch of ragamuffin drunks misplacing affections and/or screwing with this reporter they've known for just a few hours? Or do they mean it? But by the fourteenth high-five and ninth hug of the evening, it becomes hard not believe. As Rainbow takes a blanket and lightly places it on his half-sleeping bandmate, Adler slumberously places his arm around the pup. Indeed, the love is real. 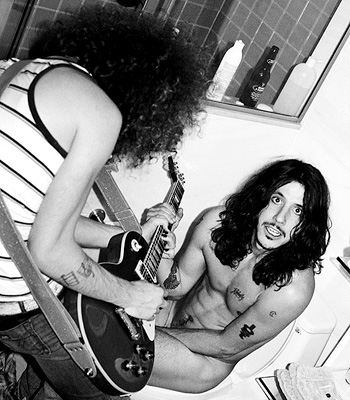 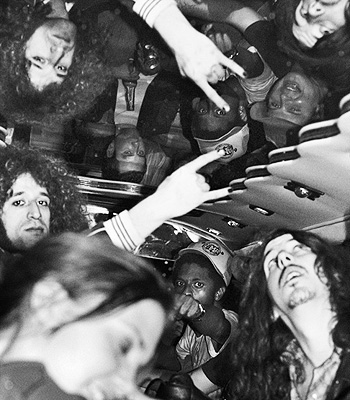 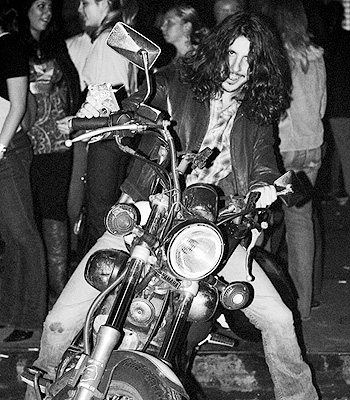 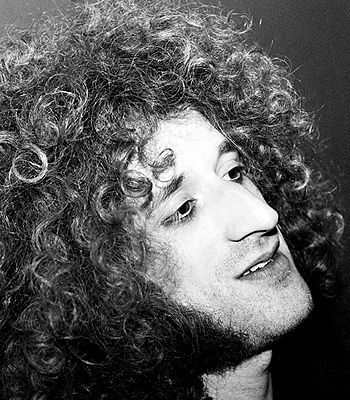