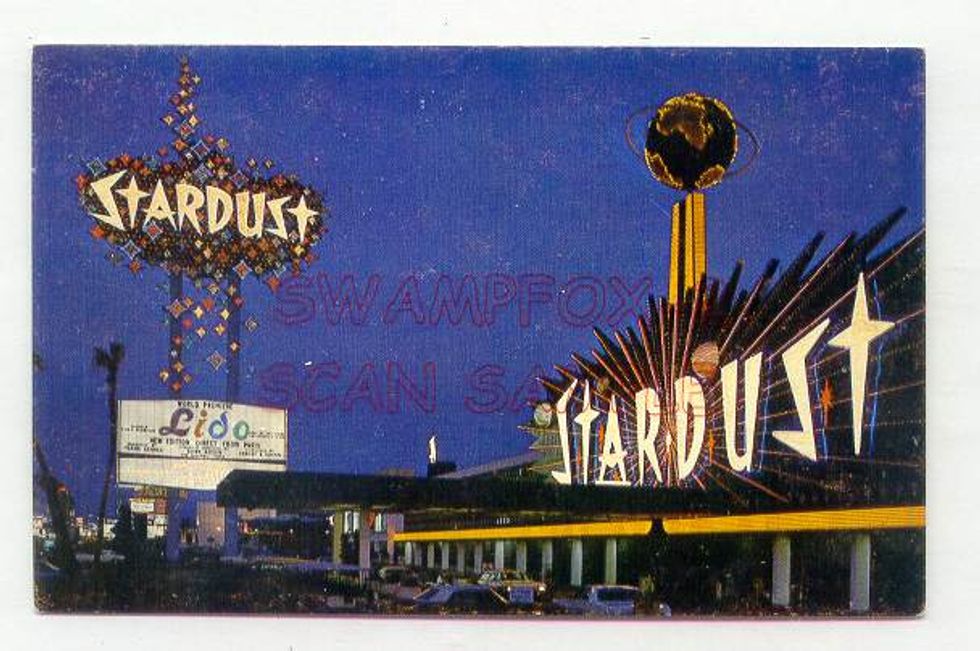 OMG! One of the precious few hotel/casinos from Vegas' glorious Rat Pack past is biting the dust! The Stardust Casino in Vegas is closing at the end of the year! This is sad news indeed. The Stardust had my FAVORITE SIGN in all of Vegas! Who gets that? George Clooney? Brad Pitt? Steve Wynn? If so, they will probably use it in about 5 years time in a 'recreation' of the 60's Vegas Strip complete with Frank, Dean and Sammy audioanimatronic dummies warbling side by side with Vince Vaughn and Jon Favreau impersonators.

One thing we can learn from Las Vegas, nothing lasts. As much as I loved going there in the 80s to see Show Biz old school acts like Shirley MacLaine (who could still kick up her heels), Jerry Lewis (soooo surreal and more than a little scarey) and Keely Smith (in the Desert Inn LOUNGE! how the mighty had fallen!), I have to agree with the great actress/singer Beverly D'Angelo who sings in one of her original cabaret songs, "Vegas Is Sad." It was sad enough when they put that gigantic canopy over Fremont Street and depressing as hell when they razed the Desert Inn (in whose penthouse Howard Hughes wasted away) but demolishing that glittering Stardust sign is too much to bear.

I guess it really doesn't matter much. One of the last times I was in Vegas was to rendezvous with the PAPER clan for their big Vegas issue. Watching the midwest gamblers recoil from the joyously flamboyant Gabi from AS FOUR was a hightlight. As was seeing our dear pal Joey Arias star in ZUMANITY. But Vegas is too big, too gross, too lumpenproletariatfratboy for even the most ironic of hipsters to tolerate. (Unless of course he/she is wasted on cocaine and Jagermeister.)  It's not Ann-Margret and Joey Heatherton anymore but Paris Hilton and the Olsson Twins. Who can swing with that? As the 'urban travel guide' Gridskipper puts it, "...if we're lucky there should be some good implosion video of the Stardust finally falling to earth."

Stardust photo for sale on eBay