In 1948 Alfred Hitchcock directed a startling thriller, Rope, based on a 1929 English play by Patrick Hamilton, about two young Oxford men who attempt "the perfect murder" -- hiding the victim's body in a trunk in their living room, and then hosting a cocktail party in the same room. The Drama Dept., with David Warren directing, is reviving the original play. "The thing that is fascinating to me is how frankly the play was about the erotic relationship between the two men," says Warren, adding, "By allowing that relationship, which was a twisted sexual one, to affect what the actors do, it gives the play a truthful and modern feeling."

The two main characters are Brandon, the charming mastermind, and Granillo, his lover, who, Warren notes, is "charmed into going along with the murder." The third main character is Rupert (played by Jimmy Stewart in the Hitchcock film), and it is he who puts things together, figures out what happens and takes action. "His awakening, and his moralistic and humanistic horror at what his two friends have done, connects with the audience," says Warren, "he arrives at his condemnation in such a powerful and surprising way that it gives the play real weight."

HIS ROYAL HIPNESS LORD BUCKLEY IN THE ZIM ZAM ROOM

"Lord Buckley was the hipster bebop preacher who defied all labels," recalls Bob Dylan in Chronicles, "he had a magical way of speaking. Everybody, including me, was influenced by him in one way or another." A self-created character, half English lord, half hipster preacher, the white tuxedo-clad, monocle-sporting, white American ruled as the jazz world's storyteller/monologist during the '40s and '50s.

American actor Jake Broder, who has spent the past 10 years working in London theater, has put together a show, accompanied by a four-piece bebop band, called His Royal Hipness Lord Buckley in the Zim Zam Room. After a two-year run in London theaters and jazz clubs, the show has finally arrived in New York. "Lord Buckley lives in between theatrical performance, stand-up comedy and scat singing," says Broder, "He's a jazz philosopher and we're creating an evening of Buckley, trying to bring to a modern audience the spirit of his work." Broder will re-create some of Buckley's more famous bits (recorded long ago on vinyl), like "The Naz," a hip version of the miracles of Jesus Christ, "the Gettysburg Address," which finds Lincoln riffing on America, and "the Swinging Pied Piper," based on the familiar old tale. Buckley was preaching love and civil rights back in the '40s, and the show's breadth extends from the '60s to now. "We're in Buckley time, where he has one foot in the 'then,' and one foot in the 'now,' and he cradles you up and swings away," promises Broder.

Have you ever wondered what happened to the Peanuts characters when they got to high school? Well, Dog Sees God: Confessions of a Teen-Age Blockhead is one person's wildly imaginative speculation. Written by Bert Royal, and directed by the sharp Trip Cullman, the "unauthorized parody" was one of the most popular shows of the 2004 New York Fringe Festival.

The main character is "CB," whose much loved floppy-eared dog dies at the play's beginning. "It's really about a boy's quest to find out about death, and what happens after that," says Royal, "and in the process he learns more about life; with issues like teen-age angst, violence and homophobia and lots of drugs, sex and profanity."

"Beethoven" (the boy who plays the piano) is a central character; he's shunned by the other kids because he's artistic and is labeled "gay." CB's sister is having "an identity crisis," and changes her look daily. "Our favorite bitch" (could that be Lucy?) has been institutionalized for pyromania, her brother (read Linus) is a burnout, and the kid with the constant cloud of dust surrounding him has become a germaphobe and the school bully. Then there's Marci and Trisha who, Royal says, "are the school sluts, best friends who are totally drunk and trashed throughout the entire show." The play is heavy on the parody and comedy, but it takes a serious turn too. "It's about CB coming to a realization of who he is; he was always questioning as a child and never got any answers," says Royal, "what I wanted to do was get some answers."

Boston-based noir novelist Dennis Lehane, who turned out some great private eye thrillers before penning "Mystic River," which won the Academy Award in 2004 for Best Picture, has written his first play, Coronado. The Invisible City Theater Company, with David Epstein directing, is staging its world premiere. "The show is about desiring what you can't have, and how people will go to ridiculous extremes to capture that," states Epstein, "and then, after attaining those things, realize they've given up on the things that mean the most to them."

The play is set somewhere in Middle America, on the 'wrong" side of the tracks and centers around three different stories: there's a couple in love, a psychiatrist and his patient (whom the shrink is trying to "talk down"), and a father and a son, in search of a mysterious woman and a stolen diamond. A cast of nine performs this two-act full length play which, like Lehane's novels, depicts a lot of heavy violence. Epstein says, "the challenge was: how do you do [the violence] on stage? The theater is very small and cozy and the action is right on top of the audience." There are a lot of "quick little scenes," according to the director, "and it plays out very cinematically." He adds, "the three stories are separate to start with, but as things keep going, you see the stories are related, and they come very close together at the end."

The provocative young African-American playwright Thomas Bradshaw created quite the stir with his earlier play, Strom Thurmond Is Not a Racist, a funny send-up of the late-in-life revelation of Thurmond's early-in-life interracial affair and the illegitimate child that ensued. He's back with Prophet, taking on the Bible, God and How Women Should Be Treated.

The main character is a 40-year-old white man, a lawyer, married to a Merrill-Lynch vice president. "He decides to kill himself because she wears the pants in the house," says Bradshaw, "and he has failed to live up to his father's, and the Bible's, advice -- namely, to hit his wife every time she didn't obey him." He appeals to God for guidance, and is given a reprieve when his wife is hit by a car. "He decides it is God's wish that he marry a Negress," Bradshaw relates, "and so he goes to the ghetto and finds an uneducated black woman to marry." After a "fancy dinner" at Red Lobster, they go back to his apartment where he dresses her in slave clothing and chains before having rough anal sex with her. Bradshaw explains that "the symbolism here is that this uneducated black woman from the ghetto is just the opposite of his white educated feminist wife." He believes that God wants him to preach "The Gospel of Male Domination," and the play heads in a surprising direction. "What I'm doing is the same thing Christian conservatives do, who say that the Bible says abortion and homosexuality are wrong," states Bradshaw, "they're interpreting the Bible very selectively, and if you interpret the Bible that way, then women would have to be slaves." There are three big musical numbers as well. 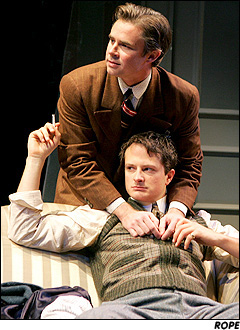 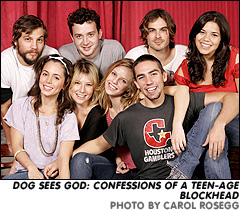