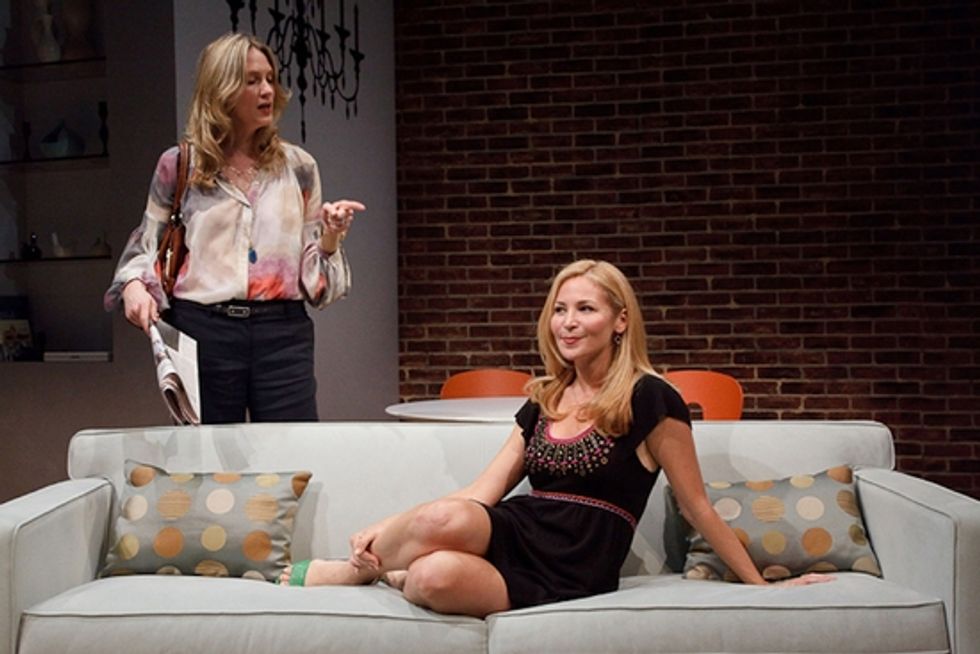 With all the memoirs being written today, who’s to say what’s true and what’s false? What really happened in your life? If you were to write a memoir, could you claim it was 100% accurate? Cusi Cram has written a play that addresses that riddle, and the very capable Pam MacKinnon directs. A Lifetime Burning is about Emma, a trust fund darling (played by Jennifer Westfeldt), who imagines her life as if she came from a less privileged background. The only problem is: she calls it a memoir, gets a nice advance and then has to deal with her sister, who is outraged. I spoke with the convivial playwright.

Hi Cusi. How would you describe your play?
t’s a dark comedy that takes a look at the modern obsession with true stories, and the “true-life” memoir. It poses the question: “If you were given the opportunity to re-write your life, would you?”

What’s the framework?
It takes a look at the question through the lenses of two sisters; one has written a pretty fictional memoir. What does that do to a nuclear family, what are the familial fireworks that ensue?

I see there are four characters.
Emma is the writer. Tess is the sister, who is more than a little angry about the situation. Lydia is the publisher of the memoir. She’s an amalgam of a certain British woman in New York, a woman in a position of power. Then there’s Alejandro. There’s a love story in the play, but we won’t say with who.

And what ensues?
It’s a bit of a rollercoaster. There are twists and turns, unexpected things happen along the way. You get pieces of the story that add up to the whole play.

I recall the scandal about a writer who wrote a book that Oprah praised and then it turned out he made it up, and he had to go on Oprah and eat crow.
That was James Frey. The book was A Million Little Pieces. It seems like there’s been a spate of these fake memoirs. So the play is definitely inspired by some of these stories and different aspects.

Is A Lifetime Burning the title of Emma’s memoir?
No, that’s a quote from T.S. Eliot about memory and how memory changes, and how hard it is to remember what happened.

I can understand that.
In Emma’s memoir she creates a less-privileged background for herself. And there are a bunch of reasons why and how she does this. The play takes a look at aspects of privilege and how that manifests itself in New York, in the time we live in. It has a satirical element. I’m certainly poking fun at privilege. It’s mostly about the two sisters battling it out.

Family dramas are a big part of American theater.
The story of everyone’s family is somewhat sacred; and if you tell something based on truth, they have a reaction to it. Because writing is dangerous, inevitably. There is some kind of consequence. There are a lot of different elements to this sister-sister relationship in the play, and why this causes such Sturm and Drang.