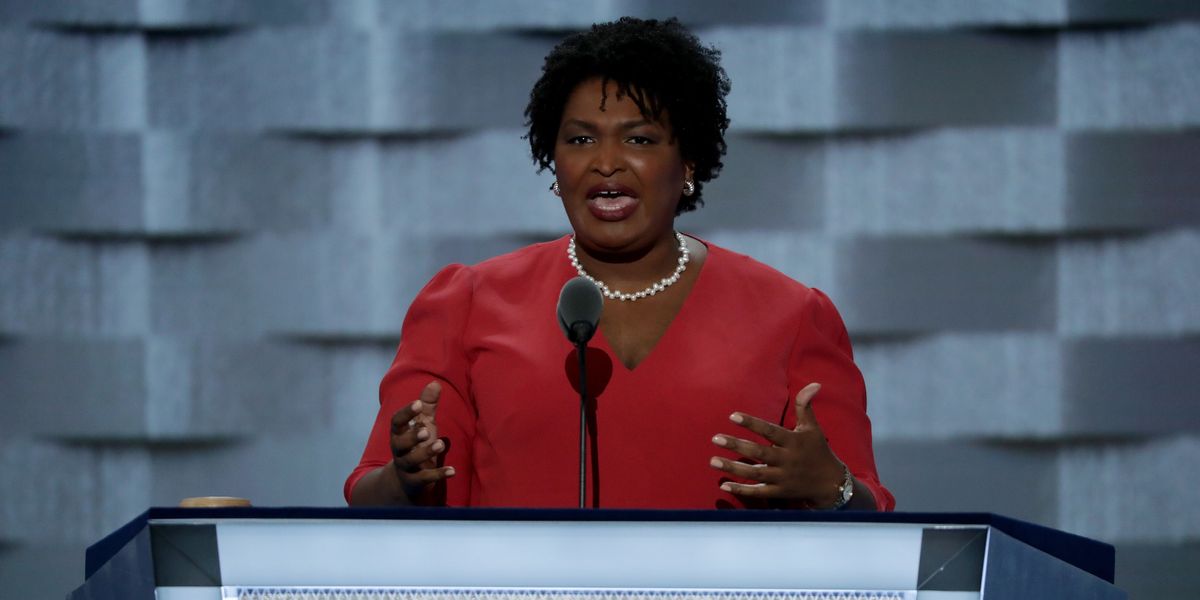 Here's what you can do, because a win for Black women is a win for us all.

Last night, Stacey Abrams made history by winning the Georgia Democratic primary election for governor. Her opponent on the Democratic ticket was a white woman named Stacey Evans, a competition the press has been calling the "Battle of the Staceys."

Stacey Abrams, in case you're not aware, is a Black woman. Her win, capturing 76.5 percent of the vote, bucked the traditional Democratic strategy of focusing on the rural white votes that time and prior elections forgot. This, if you'll recall, was one reason many offered to explain why Hillary Clinton lost her landmark run for the presidency in 2016 (not sexism, or election rigging, or anything like that, no). What Abrams did to win, was to align herself with a multiracial army of voters who supported diverse leftist causes — women's rights, labor rights, LGBT issues—hoping against all hope that, in traditionally red-state Georgia, their turnout at the polls would be fruitful. She was right.

Abrams' win in the primary puts her on the road toward becoming both America's first Black female governor, and Georgia's first female governor ever. With progressive causes! Not that this should be surprising, because after all, it was Black women who saved Alabama from itself last year. And, frankly, it is always the power of progressive Black women who save us from ourselves each and every time they show up at the polls. Now, it's time more than ever for Black women to be given the chance to lead; Abrams' campaign and what she stands for is helping to set that example in the public's national consciousness. Because Abrams and the women of color who support her aren't just reliable voters who support causes to advance the country, but more than capable, visionary leaders, too.

Though the road ahead for Abrams looks promising, there is, without a doubt, still work to be done. And for those of you reading who don't live in Georgia / can't vote there, here's how you can help ensure that Abrams and the many folks like her continue to emerge victorious, for the betterment of America.

Give time and money: It should be no surprises that candidates from marginalized backgrounds face all manner of obstacles when running and trying to raise campaign funds. Women of color face intersectional oppression, sexism, the gender-wage gap, and much more when in the position to run. Here's a comprehensive list of candidates and organizations you can read about and support, to ensure that these system injustices don't stand in the way of much needed and able leadership from women of color.

Support candidates at the local level: The Cut reports that many prospective candidates from underrepresented communities get their start locally, in DAs offices, on school boards, city councils, and statehouses. This is where esteemed careers begin for many elected officials. Look at America's Auntie/ founder of the Reclaiming My Time Initiative / California Congresswoman Maxine Waters, who worked tirelessly for years in her statehouse before checking 45's nonsense on a regular basis in Washington. Now look at your neighborhood and districts. The rise of 45's evil has given rise to more women of color determined to resist by Being the Change: Chicago's Kim Foxx, Tennessee's Raumesh Akbari, and Georgian gun-reform advocate Lucy McBath, are just a few examples of women determined to make a difference first where they live. It creates a ripple effect: Supporting Black women early in their announced campaigns will help them go further and aim higher. Back them when you can, early and often, and help them stay accountable.

Don't get complacent: Show up and keep showing up, because as we all know by now, complacency kills democracy, and primary wins don't guarantee general election victory. Remember your community leaders and women like Abrams when you vote, because a vote for a progressive Black woman in the deep south is, whether you realize it or not, a vote for all of us.