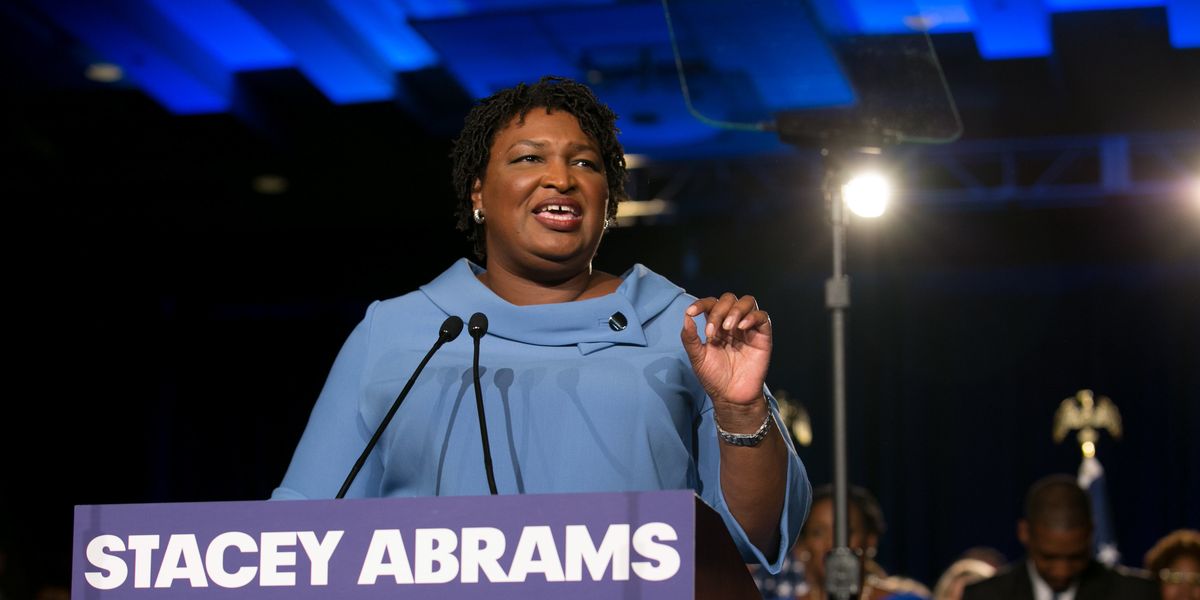 Last night, President Trump gave a big speech in which he ignored climate change and the government shutdown, fear-mongered about socialism, late-term abortion and "ridiculous partisan investigations," and claimed that his presidency has ushered in an "economic miracle." He promised bipartisan cooperation, but hammered hard the border wall power trip that caused the longest government shutdown in history — which will likely shut the government down again in nine days. Of course, he also offered requisite liberal pandering, even taking a moment to troll himself and congratulate the new numbers of women in congress... who are collectively determined to stop him from destroying the country.

Nancy Pelosi's sardonic, overly-enthusiastic clap after Trump, the pettiest man alive, urged Congress to "reject the politics of revenge, resistance and retribution, and embrace the boundless potential of cooperation, compromise and the common good" pretty much sums it up.

Stacey Abrams, the rightful Governor of Georgia, was selected by the Democrats to give the official State of the Union response, the first Black woman in history to do the honors.

Abrams aptly filled in many of the strategic omissions of Trump's speech. She condemned the government shutdown: "Making livelihoods of our federal workers a pawn for political games is a disgrace," calling it a "stunt" engineered by the president" and burst the bubble of Trump's alleged "economic miracle," bringing up attacks on union and the minimum wage.

Addressing an issue she's intimately familiar with, she also called for an end to voter suppression: "Let's be clear. Voter suppression is real... we can no longer ignore these threats to democracy."

In addition, she went in hard on health care and immigration reform, pointing out the hypocrisy of Trump's calls for bipartisanship: "We know bipartisanship could craft a 21st-century immigration plan, but this administration chooses to cage children and tear families apart."

Watch below, or read the full text of her speech here.

Other players in the democratic field were quick to jump in with their thoughts. Drawing criticism from some, who saw his choice as self-serving and with the effect of taking attention away from Abrams' historic speech, Bernie Sanders gave his own half-hour SOTU response.

He congratulated Abrams' response and joined her in fact-checking Trump's claims: "I hate to say this, but not everything Donald Trump said tonight was true or accurate."

In typical form, he focused on the assertion that America's economy is thriving: "Well, that may be true for the members of his Mar A Lago country club... for the wealthiest people in our nation, Trump is right, the economy is really booming."

Perhaps predicting criticism, before sharing his own comments, he encouraged viewers to watch Abrams' speech.

Others chimed in on Twitter, offering support for Abrams and emphasizing many of her points — several taking the moment to direct attention to their own 2020 presidential campaigns.

We heard plenty of things in tonight’s #SOTU that made my blood boil. But it’s not enough for us to just get angry… https://t.co/G7GiDAd5BK
— Elizabeth Warren (@Elizabeth Warren)1549426274.0

Just a reminder that this State of the Union Address was originally pushed back because Trump shut down the governm… https://t.co/t2uMnDdtSN
— Kamala Harris (@Kamala Harris)1549420522.0