Alexandru Matesan is the 19-year-old Romanian meme prodigy behind the cult Facebook page, Squatting Slavs in Tracksuits, which has accumulated almost 140 thousand likes since its inception in 2014. A play on an older meme that was born on 4chan's international board--the satirical "Why do Slavs squat?" catchphrase--Matesan claims the success of his new page is thanks to his own Internet prowess, as well as to the members of his private Squatting Union group, which acts as a sort of incubator/tracksuit thinktank for the larger group's content. And strangely enough, Squatting Slavs has become quite the hub for an international community of memeheads, unleashing a whole new lingo, a slew of inside jokes, and even an IRL squat meet-up in Bucharest in mid-May. Read our Q&A with Matesan below to learn more about the meme and its origins, you obvious "amerikani spie."

How'd you come up with the idea for Squatting Slavs? Why make such a hyperspecific parody?


I didn't come up with it--it's a really old thing. I wrote an article documenting its history. I just knew how to make it more appealing and easy for everyone [on the Internet] to understand. People actually did and still do this! My page and website are just more of a meme-fied mirror of it. It started off in Communist-Era Europe, then it became a [poorly understood meme around 2009 that only a few got] until I got my hands on it.


Out of habit, I guess. I work with the Internet for a living and I usually use Facebook or Twitter as the first medium for "pushing" something. It's better because they pretty much have everyone you'd want [to reach] on them -- it's just a matter of standing out on the websites.

But [Squatting Slav] culture shouldn't be restrained to just Facebook, and it won't. I now have a website and pretty solid team, so things are good. It's like a battle of cat and mouse actually, because Facebook unpublished the page this morning at 112,000 likes. It's probably due to a misunderstanding of the "inside joke" -- they weren't very specific on the reasoning behind it -- [but the page] should be back [soon]. Or, worst case scenario, it will be remade under the name "Slavwave."

Do you remember who were the first people to start liking the page?


Yes, I always talk with them. I got most of them to be a part of The Squatting Union, which is our secret group that has the best people from the page [in it]. I use them as a control group for evolving the meme in the best direction -- it's a really interesting community. They even helped me create two of the main inside jokes, [which are the] "big business" (typically referencing any squatting slav trying to up their game with a little flash) and the "amerikani spie" ones (referring to squatters who don't quite get it). 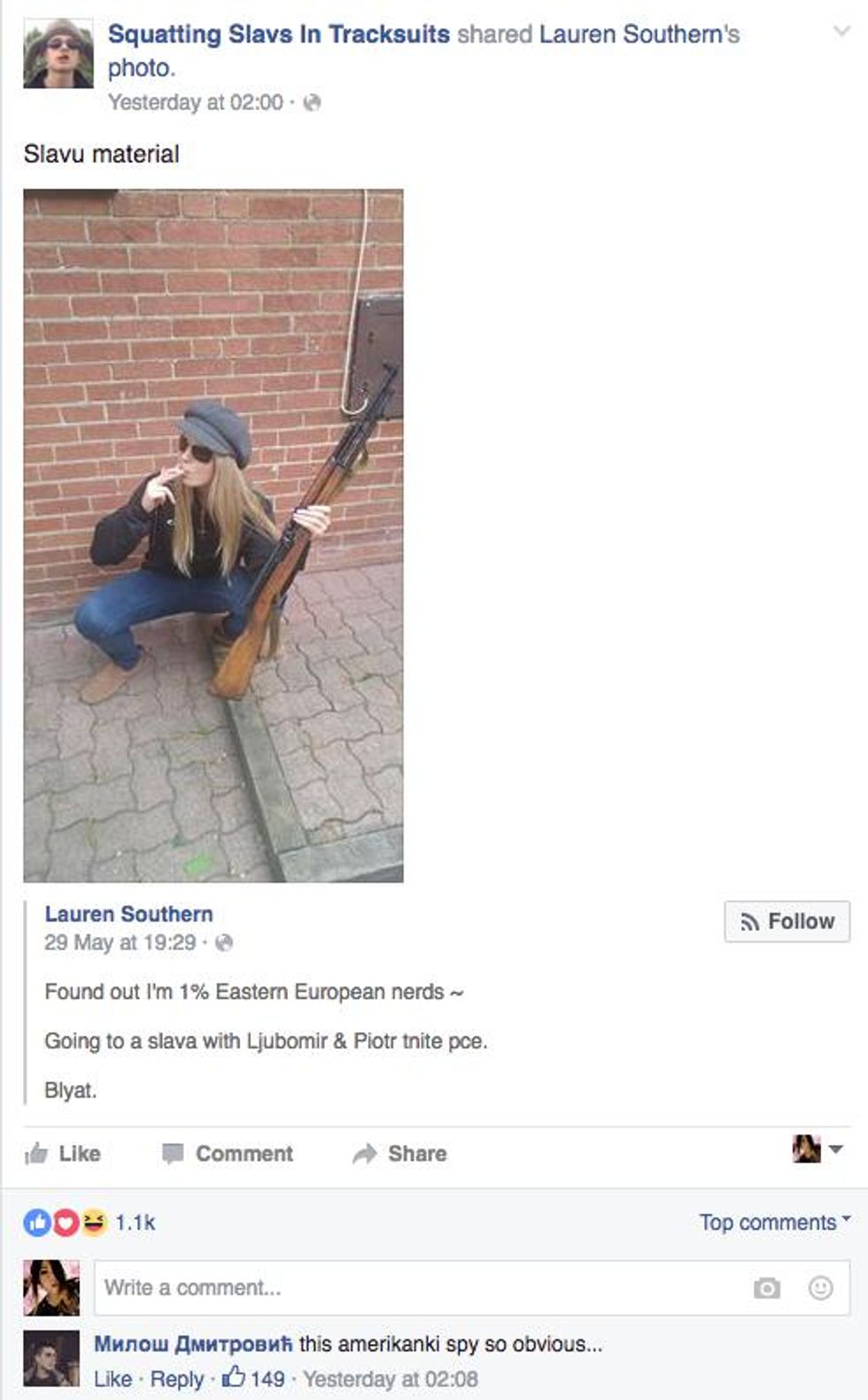 Where do you keep finding squatting slavs? Do you get submissions? How are there this many random pictures of squatting slavs in tracksuits on the internet?


I ran out of content from the "regular" Internet when the Facebook page was around 20,000 likes, so I had to improvise. Most of the content is made by me or members of the The Squatting Union. Also the [Squatting Slavs in Tracksuits] page now gets around 1,500 submissions a day, so we won't run out anytime soon. It's just a matter of picking the best ones and not giving in to every half-assed submission, no matter how hard they ask you to post it. But something interesting happened after [the squatting slav phenomenon became more well known thanks to] the page. The whole Internet started getting a lot more into the culture, and new content suddenly started being produced left and right, as people saw how cool it could be, because someone took the time to show them. Keep in mind this all happened in [something like a week and a half] -- it all sort of blew up on me.

Have any self-identified squatting slavs gotten mad at you for this?


A few people got mad, but nothing serious. I've stopped using edgy tones to represent the culture a long time ago, so any truly pseudo-disturbing [stuff that may have been initially attached to the squatting slav] -- like the Remove Kebab meme -- are now nullified. So anyone who gets mad is really just silly and they should walk around more before they judge the squat. Everyone really loves the idea and it's a community that collaborates. I personally saw commenters that were outraged by the notion get turned into loyal members of The Squatting Union.

What was your first social network (Friendster? MySpace? Etc.)?


It was a Friendster, I believe. they were dark times. I was a very young Gopnik.

What is the weirdest account you love to follow/check regularly?


I don't want to sound rude or arrogant, but [aside from] a few entities too obscure to reference here, there really [isn't much I like] other than my own [brand] and some of my friends' -- like Snakes with hats and Birds Tho. If I enjoyed that many things on the Interwebs, I wouldn't have spent so much time building my own.


I saw so many things in my day, it completely desensitized me from anything with intended shock value. So I can't really give any notable examples.

After we initially contacted Matesan, he followed up to share that he had just put together the "first organized IRL meeting of slav squatting."

We did it in a public park in Bucharest, then did a 3-mile march around it and traveled to another park in a tram -- in which we squatted proudly, of course. In total there were around 50 to 75 people who actually came. And now that my little "social experiment" went so well, I have no reason to not organize a SlavSquat tour around some European countries in 2017. Or perhaps even sooner.


Also if you're still into slav squatting, I played around and extended the Slavic influence on social media by creating Scenic Depictions of Slavic Life and Lada Life.