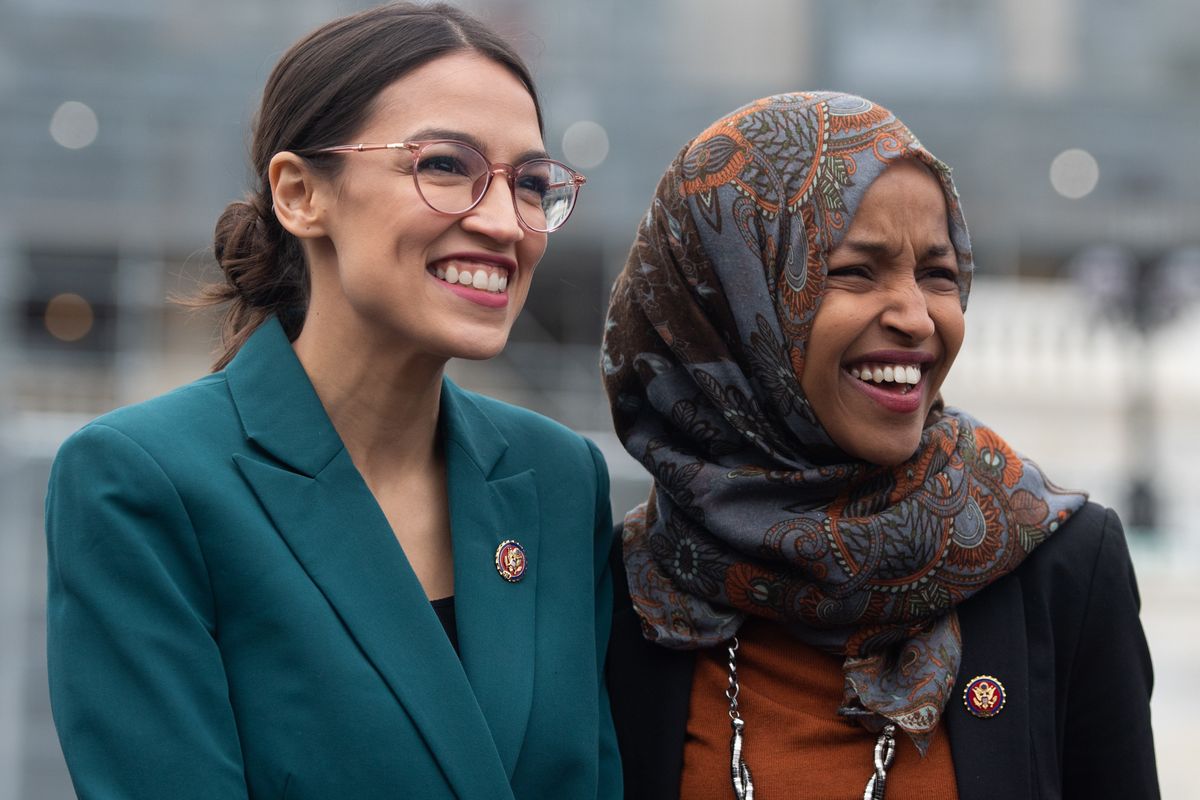 After President Trump tweeted that a group of "'Progressive' Democratic Congresswomen" should "go back" to their countries, the four, non-white congresswomen he is believed to be referring to — New York Representative Alexandria Ocasio-Cortez, Minnesota Representative Ilhan Omar, Michigan Representative Rashida Tlaib, and Massachusetts Representative Ayanna Pressley — responded to his bigoted statements via press conference, per NBC.

Over the weekend, Trump took to his Twitter to lambast the group of lawmakers — known as "The Squad" — by writing, "So interesting to see 'Progressive' Democrat Congresswomen, who originally came from countries whose governments are a complete and total catastrophe, the worst, most corrupt and inept anywhere in the world (if they even have a functioning government at all), now loudly... and viciously telling the people of the United States, the greatest and most powerful Nation on earth, how our government is to be run."

He then added, "Why don't they go back and help fix the totally broken and crime infested places from which they came. Then come back and show us how... it is done" — despite the fact that three of the four lawmakers were born in the United States, and all of them are American citizens.

Naturally, Trump's xenophobia was met with backlash online — incurring criticism via the hashtag #RacistPresident, as well as the condemnation of all four congresswomen, who pointed out the "racist" and "dangerous" nature of his ideology.

Want a response to a lawless & complete failure of a President?

THIS is what racism looks like. WE are what democracy looks like. And we’re not going anywhere. Except back to DC to fight for the families you marginalize and vilify everyday. pic.twitter.com/vYzoxCgN0X

You are stoking white nationalism bc you are angry that people like us are serving in Congress and fighting against your hate-filled agenda.

“America's answer to the intolerant man is diversity, the very diversity which our heritage of religious freedom has inspired.” -RFK

Mr. President, the country I “come from,” & the country we all swear to, is the United States.

But given how you’ve destroyed our border with inhumane camps, all at a benefit to you & the corps who profit off them, you are absolutely right about the corruption laid at your feet. https://t.co/HLKQCotR8T

And though Trump doubled down on his statements following their responses, the four congresswomen went forward with a joint news conference to "respond to U.S. President Donald Trump's openly racist comments attacking the duly elected members of Congress" earlier today.

Labeling his abhorrent, "blatantly racist" assault on them as a distraction from the myriad of issues with his administration, Rep. Omar said, "This is the agenda of white nationalists, whether it is happening in chat rooms or happening in national TV. And now it's reached the White House garden."

Speak truth to power. We are all Americans nobody has the deed or ownership of America #RacistPresident #RacistGOP pic.twitter.com/cyUU14VnO3

Meanwhile, Rep. Ocasio-Cortez said that she was "not surprised" by Trump's comments, especially given his on-going treatment of migrants. However, she also said that, "We don't leave the things we love," before adding, "we love all people in this country."

In response, Trump has continued to tweet hateful messages about the lawmakers, writing, "IF YOU ARE NOT HAPPY HERE, YOU CAN LEAVE!" before accusing them of being "anti-Israel" and "pro Al-Qaeda."