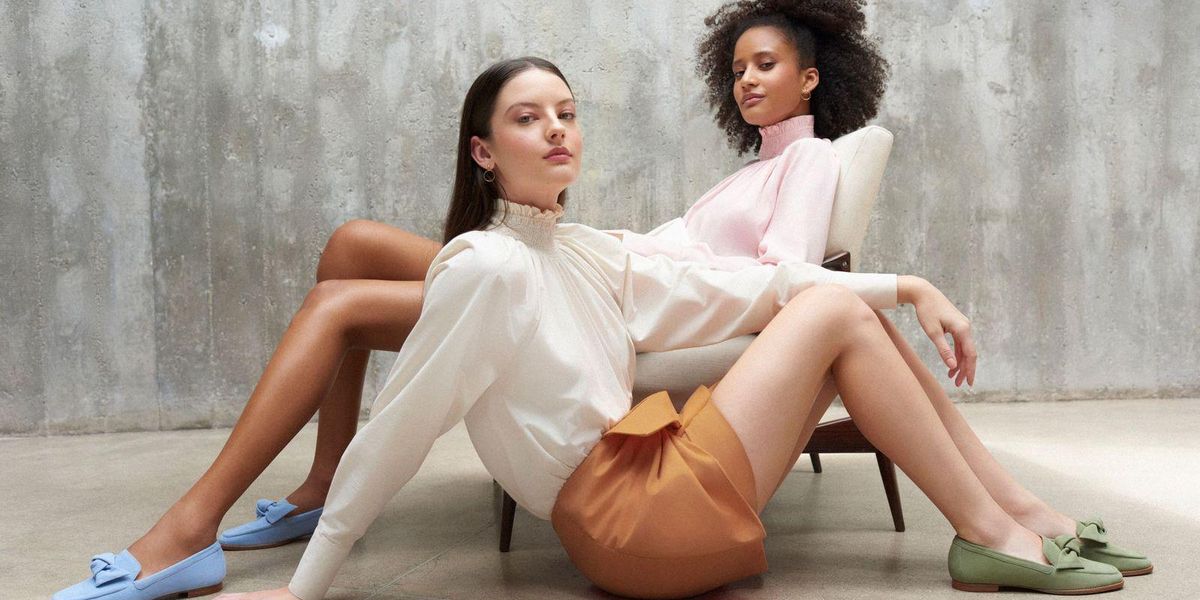 With 2020 finally in the rearview mirror, designers are more hopeful than ever as the start of a new year unfolds. This season's campaigns straddle the line between the novel and familiar, with many brands continuing to work with the same group of creatives and others exploring new territory. From Fendi's intimate portraits shot by Nick Knight to Dior's Baroque-style imagery, the latest ads offer something unique for everyone. We'll continue to update the list as more Spring 2021 fashion campaigns come in.

Rag & Bone enlisted dancers Lil' Buck and his wife Ai Shimatsu to star in a short film titled "Times Change" that captures a year-long quarantine fever dream in New York City. The choreographed video shows the couple in an infinite loop of their daily routine before shifting from stiff suits and shirts to a relaxed, comfortable wardrobe.

The images for Burberry's latest campaign consists of images taken from the brand's outdoor spring collection opposite studio shots of models in the collection shot by Juergen Teller. "This campaign is all about continuing that examination of different perspectives, contrasting the rawness of the internal environment with the ever-blooming nature of the outdoors," said Riccardo Tisci.

Photo courtesy of COS/ Karim Sadli

The COS spring campaign featuring Edie Campbell and Adesuwa Aighewi was shot by Karim Sadli and styled by Aleksandra Woroniecka. The collection includes a mix of relaxed essentials and statement pieces in muted color palette and airy fabrics as a "fresh take on elevated and redefined wardrobe icons," according to the brand's design director Karin Gustafsson.

Heron Preston takes a back to basics approach with his SS21 collection. Forever propelling the eponymous label forward, Preston offers a more stripped down approach, one that focuses on the brand's DNA. As the pandemic shifted the label's design process, the collection came to be through virtual means as Preston operated in Brooklyn while his team was in Milan, forcing Preston to take an internal look at the brand's production practices.

DSQUARED2 presents its SS21 collection through a star-studded campaign, with the slogan "WE MOVE TOGETHER. WE ARE UNITED." Featuring Naomi Campbell and rising model Precious Lee, the kinetic roster of personalities pose and move in a playful harmonic, exuding a dynamic synonymous to the clothes' bold, edgy designs.

For Marc Jacobs' playful secondary line, The Marc Jacobs, Madonna's daughter Lourdes "Lola" Leon shows off the brand's newest accessories like "The Tote Bag" while wearing giant floral headgear. According to a statement, the model, who just launched an Instagram account and signed with CAA last year, "perfectly encapsulates the youthful spirit and uncompromising sense of individuality central to this younger expression of the brand."

Echoing the mundanity of life in quarantine, Eckhaus Latta's campaign depicts the everyday of a post-adolescent life where one has nothing to do. Featuring two pre-teens in a winter forest, the tension of leaving childhood and the idleness of our present are rendered salient within the shoot and the knitwear as well.

After disappearing from social media altogether a few weeks ago, Bottega Veneta has released its Spring 2021 campaign featuring looks from its "Salon 01" show held last October in front a small London audience that included Kanye and North West. The images capture actress Sheila Atim and artist Rosemarie Trockel in the brightly colored wares designed by creative director Daniel Lee, including a series of heavy gauge knits which the models wore while sitting on matching patterned sofas.

Shot in the New York Restoration Project Bronx Community Garden by Inez van Lamsweerde and Vinoodh Matadin (the same location of its show in October), the latest Michael Kors campaign emphasizes the importance of nature within a metropolitan setting. Even amidst a typically chaotic city and an even more chaotic global pandemic, Michael Kors not only illustrates the affirmation that blossoms through nature but its inherent healing that can arise even in the middle of the concrete jungle.

Stella McCartney handed over full creative rein to three different female creators from the UK, Japan and US — Netti Hurley, Monika Mogi and Anna Pollack — who cast several activists, including Lourdes Leon, for the SS21 adidas by Stella McCartney campaign (titled "FUTUREPLAYGROUND") as an ode to the world and the environment.

Few settings are as magical as Paris in the spring, the location of Jimmy Choo's latest campaign. Model Sharon Alexie shows off the brand's SS21 collection while navigating around the City of Light in glamorous and daring poses.

Worn by everyone from Kendall Jenner to Lady Gaga, French jewelry designer Justine Clenquet is inspired by a variety of influences including glam rock and punk subcultures. Her collections are handcrafted in France with luxury materials like 24k gold and palladium-dipped metals.

This season's campaign, dubbed "Coach it Forward," features some familiar faces like Jennifer Lopez and Michael B. Jordan shot by Renell Medrano and styled by Olivier Rizzo. It focuses on the "power of positivity, collective action and the importance of everyday recognition for the people in our lives who help move our worlds forward."

Following the same underwater fantasy theme explored in Versace's runway show in September, the brand's latest campaign is named after the fictional world of Versacepolis. Models like Precious Lee, Kendall Jenner and Hailey Bieber show off the brand's La Medusa handbag line complete with wet-look hair, starfish and jelliyfish motifs and, of course, the Medusa-head plaque.

The German fashion house, which is perhaps best known for its signature travel accessories, created a CGI-meets-real life universe for its spring campaign, titled Techno Jungle." Elements of nature and virtual graphics converge into an augmented safari-like world that features lush landscapes and techno tundra for the ultimate MCM voyage fantasy.

The pastel hues with pops of saturated reds and blues seen in Fendi's latest campaign are a nod to the color palette used by Creative Director Silvia Venturini Fendi from her Spring 2021 collection. Shot by Nick Knight in his London studio, the imagery evokes an airy scenography compete with floating white curtains and human shadows.

After several seasons of relatively minimalist ads with stark white backdrops, Dior's new visual direction first seen for Cruise 2021 continues with these Baroque-style images shot by Elena Kechicheva. The series of tableaux, in which models pose in groups that recall 16th-century Caravaggio paintings, are inspired by the Old Masters complete with dramatic lighting and classical finishing.

No photographer, at least the human kind, was enlisted for Prada's Spring 2021 campaign. Rather, the brand captured the models, who made their runway debut in September in Co-Creative Director Raf Simons' first show with Miuccia, by having several cameras stationed from various angles as a commentary on the role of technology in the world today.