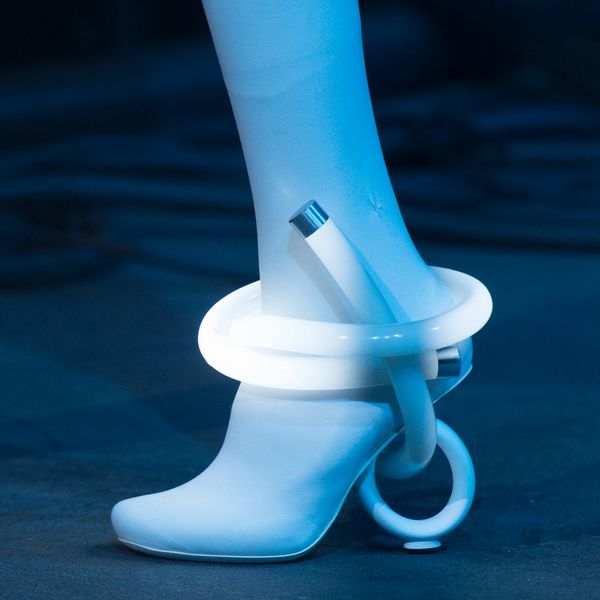 For his first London Fashion Week outing Nicholas Kirkwood, who usually opts for intimate presentations, pulled out all the stops. The designer's dystopian, tech-themed show — along with a guest appearance by a barefoot Rose McGowan wielding a neon shoe — featured block heels with an electrical cord upper, booties wrapped in tube lights, and iridescent chiffon knee-high boots with a circuit board pattern running throughout.

This year marks the 10th anniversary of Mary Katrantzou's namesake label. The Greco-British designer showed a collection featuring elements of her biggest hits, from heraldic patches and postage stamps to mesmerizing bugs. Shoes including pumps with a metal heel encased in a PVC tube, sharps leather boots with charming white piping, and strappy sandles with pleated plastic inserts were as precise as the ready-to-wear.

At Jil Sander, Luke and Lucie Meier fused square-toed ballet shoes with boxing high-tops to create a supple leather bootie and reinterpreted the geta sandal as a platform slipper with inflated straps. The husband-wife design duo, who are just three seasons into their tenure at the house, are proving that footwear is a key focus for them.

As opposed to pairing stilettos with his lineup of luxurious silk, lace, and leather dresses trimmed with feathers and sequin, Valentino creative director Pierpaolo Piccioli opted for easy sandals in cognac and red. A flourish of ostrich feathers in shades from blush pink to robin's egg blue gave the comfort-first styles a soupçon more glamour.

Clare Wight Keller's spring collection for Givenchy (inspired by the late gender non-conforming Swiss writer Annemarie Schwarzenbach) showcased a series of sharp kitten heels that looked as if they were peeling away from the foot. Executed in metallic and army green patent leather, the angular shoes complemented the collection's sharp tailoring.

As opposed to using them on top of her shoes, Simone Rocha lined the sides of her mules and pointed slingbacks with them giving the illusion that models were stepping onto strategically placed feather bunches. If sating slippers weren't already carpet-to-carpet shoes, Rocha's iteration gives us another reason to be extra careful.

In addition to his sensual ready-to-wear and mini-or-massive handbags, Simon Porte Jacquemus has become known for eye-catching shoes informed by geometry. In his spring 2019 collection, the designer stacked translucent and gold pieces (resembling doorknobs, '80s jewelry, and toy blocks) to create sculptural heels and even suspended a sky-blue acetate "J" in the middle of circular one.

The footwear at Jeremy Scott's show ranged from clear knee-high boots covered in multicolored crystals and to stylized snow boots in silver and neon colors. It was the waders though, that stole the show. Patchwork denim and glossy PVC boots extended up the body and turned into zip-able overalls.