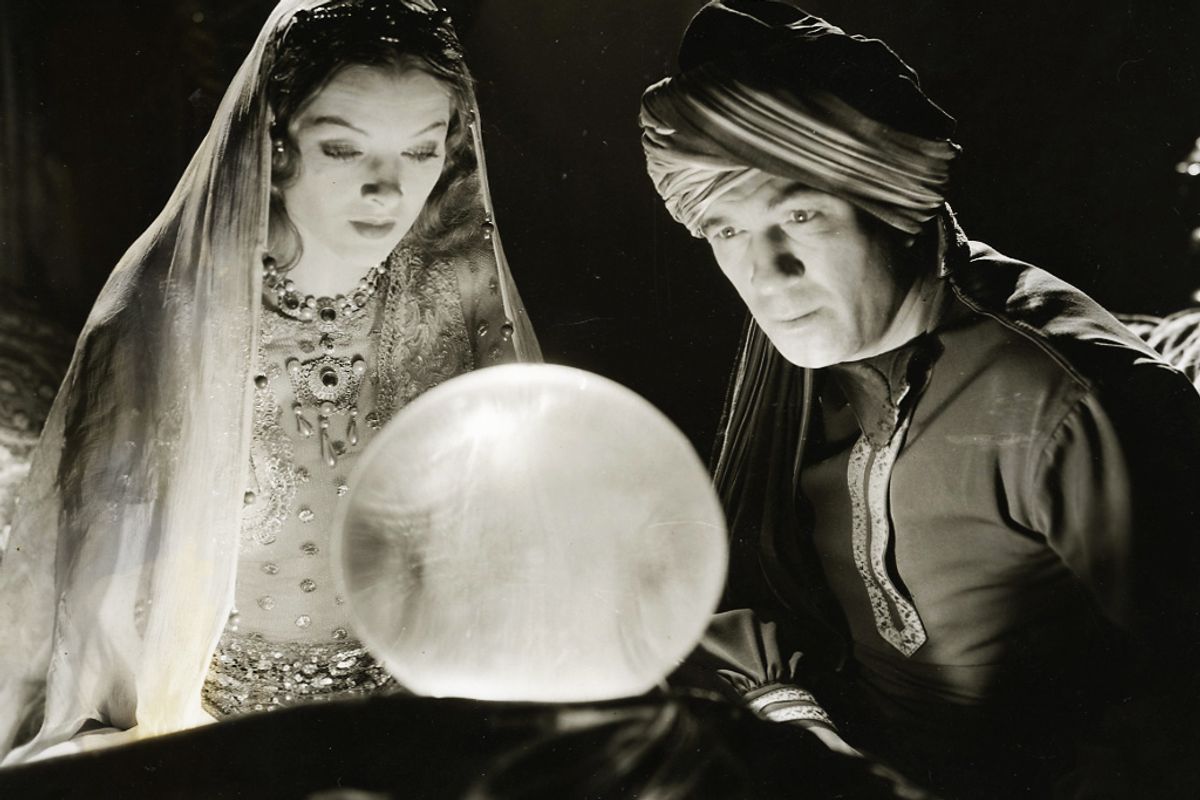 Spirit Voicemails and Emailed Palm Readings: Inside the Weird World of Etsy Psychics

I was twelve when I got my first palm reading. A spur of the moment, rom-com type thing. I followed a sign advertising $5 readings up a flight of carpeted stairs and into a hazy living room, where a woman who looked older than she was held my palm in one hand and an endless Capri cigarette in the other. Sesame Street droned on behind a curtain, accented by the patter of small feet.

"There are two men in your life right now," she informed me. "The letters I'm getting are M and J." There was an M and J, and also a S, a B, and sometimes an F. (I was boy-crazy as shit.)

"J is just a friend. You should tell M how you feel." This was exactly what I wanted to hear -- and I took her advice, even though M was dating my former friend and I was moving out of town in a few weeks. When the universe talks, I fucking listen.

I've visited dozens of palm and tarot readers since then. I even made my therapist read my astrological chart -- twice. I'm not a 100% believer, but there are reasons I keep going back. There's something super intense about a person you don't know trying to read you in an impossibly short amount of time. It's like cosmic speed dating. And of course, I love the otherworldly feeling I get when a psychic nails it. I've had more misses than hits, but I've also had complete strangers look into my eyes and read me like Zebra Katz.

Which is why I was surprised to find dozens of internet psychics chillin' on Etsy one day. You have to be down af with the universe to read someone online. (Or a top-notch Googler.) And for me, sharing energy is crucial to The Read. The best readings I've had were physical experiences to some degree -- so wouldn't an online reading fall flat in comparison?

I hired three Etsy psychics to find out -- a palm reader, a tarot reader, and one who said she'd straight up channel my spirit and send me a voice recording with her hot takes. It's been three months, so I'll grade my psychic friends based on their accuracy and the reading experience itself.

I was most excited -- and skeptical -- about the spirit read. I pictured a 40-something woman in Arizona analyzing my Tumblr for an hour, then wowing me with Realness. But it became clear I wouldn't even get that much thought. After pinging me to tell me I'd forgot to send her a question (which I hadn't realized was necessary), I sent her three. I also sent her a picture of myself and the subject of one of my questions. They were:

I realize the questions were vague, but I figured a true spirit reader would be able to suss out the details. Wrong. I received another email asking me to elaborate. It was a Friday night and I was in the throes of mainlining old episodes of The Following, so I decided to put off the elaboration until the morning. But I never got the chance, because in the a.m. I had a voice reading in my inbox.

Before diving in, she reminded me that she did ask for specifics, but she was going to get into it, anyway. To the first question, she said, "I have no idea what that means, but I'm getting from Spirit that the answer is yes." (Turned out to be true, against all odds.) To the second question she said, "The very first project that you started at the beginning is the one you should work on. Continue to work on the others, but put 90% of your intention into the very first one, because that's where your passion is." (I kind of asked this question because I have no idea where my passion is, I was hoping she could locate it.) As for the third question, "the answer is always yes." She said I'm taking the hard way, creating obstacles for myself, and am basically dysfunctional in my daily life. Then she told me I was going to end up sick if I didn't get my worrying under control, which is exactly what every anxious person wants to hear! But it wasn't all bad, because Spirit gave her some medical advice for me: Magnesium. Spirit told her I should take baths with Epsom salts, or at least soak my feet in them. Then she started rambling about processed foods and basically turned into an herbal medicine message board (I know because I read them).

Speaking of salty things, I was -- I'm not sure what the rush was, but it's kind of impossible to evaluate the psychic abilities of someone who went rogue with information she didn't feel was adequate enough.

Psychic Grade: C -- Spirit got one question right and provided me with valuable medical advice I still haven't used

This reading involved taking several unflattering images of my hand against a white surface (my couch). Communication was fast and easy, except my reading came in three unthreaded emails with random words capitalized and highlighted. I was reminded that the palm reading is not a psychic reading, but a broad picture of my spiritual journey and mind. So here's my (truncated) journey:

Psychic Grade: A+! -- My hands are fugly but they're HONEST

Experience Grade: A -- The delivery method was a little unorthodox, but of all the online readings in the world, this one felt worth the money. She's the only one I'd recommend.

This reading took the longest to complete, which was a relief after the Spirit debacle. The tarot reader provided an overview card for the next twelve months, then pulled a card for the first and second half of each month. With the gift of hindsight and the non-gift of bad memory, I will try to rate her accuracy for the last three months.

Overview -- Ace of Cups: New emotions, how you feel and who you feel toward. This card can hint at a new romance coming very soon, if not already there for you. If this is an already established relationship, it tends to say, things will get better in that relationship.

First Half -- Wheel of Fortune (reversed): This card talks about new situations where you are expecting it to go against you, go the opposite and favor you. Yes, it can represent gambling luck but be warned it can leave very quickly if abused.

Second Half -- The Chariot: It has two different meanings that can be linked together at times. It represents a fast trip (like weekend or less) or the conquering hero returns (overcoming a battle). What I am getting is a bit different but also much like it. You will have to make a quick trip or decision that will help you overcome a situation that you have been dealing with for a while. Once that is done, you will have a sense of relief.

No romance to speak of, but I did have my first (unrequited) crush in August after a long, drawn-out breakup. Remembering there are other men in the world who I'm sometimes attracted to definitely changed the way I feel about my prospects. Nothing fortune-y happened in the beginning of the month, but at the end of it, I did go on an overnight trip for work right after a depressive episode and returned feeling... yeah, relieved. Two out of three, not bad.

Overview -- Seven of Swords: Your thoughts/plans or activities are stolen from you. This could be a person in your work taking credit for your work or something similar.

First Half -- Three of Wands (reversed) - Plans and dreams for the future must be put off, for a short while. I got the feeling it was only for a season, which is either a literal season (spring, summer, fall or winter) or just means three months.

Second Half -- Page of Wands (reversed): It can represent either a young immature person or it can point to an adult that acts like a spoiled child throwing a temper tantrum. Yes it can be you or another person. Just be aware that if it is you, you will lose friends over it.

None of this happened.

Overview -- Six of Wands: On an emotional level this card represents overcoming an emotional obstacle and at least at some level feeling like you won the battle. This could be a general feeling as well as due to a specific situation.

Second Half -- Two of Swords: you are protecting something or someone that either does not need it or more likely does not deserve it. It is time to take off your self-imposed blindfold and see things as they really are.

I've always had trouble with co-dependence, so in the summer I started seeing a therapist with the goal of moving cross-country by myself. And I did, on October 1st, and it's the best thing I ever did! Won the battle so hard. But as the cards say, I'm broke as hell -- moving costs a million dollars, and as a freelancer in a new city, my routine is... well, I don't have one anymore. As for that blindfold I like to wear, that shit has been ripped off me twice this month. Probably should've reviewed my reading before letting my Golden Retriever dopey optimism take over. There's always November, right?

Psychic Grade: B+ -- Where is the lie (September apparently, but this was pretty on point)

Experience Grade: B -- Decent delivery time, but pics or it didn't happen