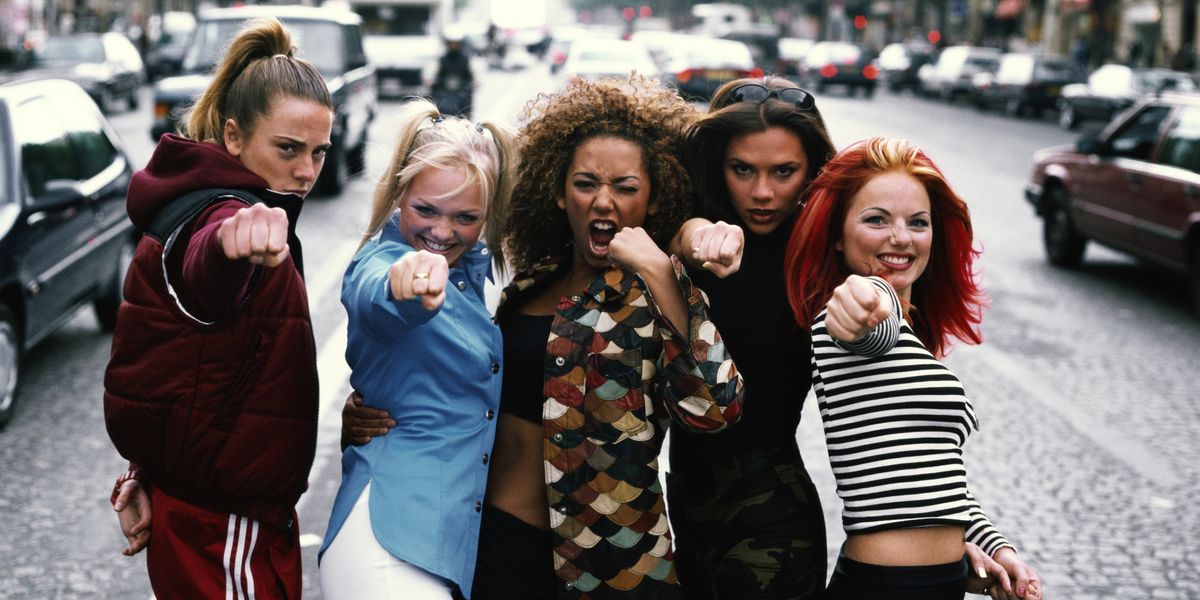 It's been 20 years since the five most famous British pop stars spiced up the lives of millions of music fans around the world. But they didn't just do it with their music: in fact, the band known as the Spice Girls brought it to their fans through film with Spice World. This was the perfect way to ensure world domination following the success of their 1997 hit (1996 in the UK) "Wannabe," and their two perfect pop albums.

In a riff off The Beatles' LP A Hard Day's Night, Spice World became the ultimate musical comedy of the '90s. Directed by Bob Spiers and written by Kim Fuller (yes, Simon's brother) and Jamie Curtis, Victoria Beckham (Posh Spice), Geri Halliwell ( Ginger Spice), Emma Bunton (Baby Spice), Melanie Brown (Scary Spice) and Melanie Chisholm (Sporty Spice) took fans on a literal and metaphorical trip around London for a series of comical events leading up to their headlining show at London's Royal Albert Hall. It was perhaps the last great thing the pop quintet did together before Ginger Spice quit the band in May 1998. Spice World lives on as their last big hurrah.

While Spice World was deemed a box office hit, profiting $77M, it was panned by critics. However, die-hard Spice Girls fans likely didn't have the same opinion: chances are they collected Spice Girls lollipops, stickers and dolls, and this VHS film was a part of their collection.

If you grew up in the '90s, perhaps the plot of Spice World wasn't even that intriguing — maybe you were captivated by their Union Jack platforms, metallic bodysuits or their proclamations of "girl power." The movie was over-the-top — and it was supposed to be. But looking back on it two decades later, it was an incredible retrospective of pop culture that was more meta than we realized at the time.

The movie has a variety of plots and subplots, but the overarching theme is that the film is about the making of a film. The Spice Girls are loved by all and there seems to be no dirt on the group, so a publisher recruits a spy to find the respective skeletons in their closets in order to sell more newspapers. Here's where the really meta part comes in: the Spice Girls manager is fielding movie pitches for the band in the movie about the band. Spice World is actually the successful movie pitch. Maybe your mind is blown way more now that you've had 20 years away from the movie, but that's not even the wildest part. During the film Posh, Ginger, Scary, Sporty and Baby Spice encounter aliens, a "bomb" on their tour bus and even endure a chase scene. Oh, and their friend goes into labor — but that's not quite as interesting as the aliens.

From the opening credits, Spice World played off the James Bond movies with five dancing silhouettes. But they didn't stop there: Bond actor Roger Moore had a cameo as a faux Bond villain named "Chief" who pets a pig. Even Posh Spice gets in on the fun playing dress up in a Pussy Galore costume — a direct reference to the Bond films. Posh isn't even the only one who gets to wear a costume: the girls got to riff off each other's personas in a montage: Scary as Ginger, Baby plays Posh, Sporty takes on Posh, Baby portrays Scary and Ginger as Sporty Spice.

In the film, rocker Meat Loaf even had a supporting role as the band's tour bus driver, Dennis, who is a part of the girls' adventures around London. Perhaps you missed it at the time, but Meat Loaf subtly pays homage to his hit song "I'd Do Anything For Love" when he refuses to fix the bathroom on the bus saying, "I love these girls, and I would do anything for them, but I won't do that." Plus the girls even get a warm hug from Sir Elton John.

If you were looking for a solid plot or an Oscar-winning film, Spice World probably didn't strike your fancy, but it was a perfect celebration of the Spice Girls' impact on music and international takeover. The ending of the movie is anti-climactic — even Ginger Spice points it out post-credits. But if you took it at face value, Spice World was a gift to their fandom; it was an iconic film because it celebrated the spirit of a band that was changing pop culture. And it didn't take itself too seriously (as Ginger Spice proved at the end of the movie). Spice World didn't have to get critics' approval for fans to love it: it's a piece of pop culture that's frozen in time, summing up the London music scene in the late '90s.