Over the weekend, Facebook user Mary Numair went to Portland's Lloyd Center shopping mall, and ended up stumbling upon a crass attempt at capitalizing on the number of sexual assault allegations swirling around Donald Trump.

On her Facebook, Numair posted a photo of a Spencer's display of pro-Trump merchandise that overtly made reference to the President-elect's infamous, degrading "Grab 'Em By The Pussy" audio leak, as well as a shirt reading "Deal With It" above Trump's picture.

"This is proudly being displayed in the front of their PDX store," she wrote on the post. "Way to normalize sexual assault." At press time, the post has close to 5,000 shares with many comments condemning the store, calling for a boycott and noting the violation of the mall's Code of Conduct, which prohibits, "wearing apparel which has obscene language" and "any other behavior or activity that is perceived to be offensive to the general public."

"Beyond the fact that in no circumstance do I condone this, it is inappropriate for children to view," user Lisa Gladstone wrote. "Even if it is not, it may violate the standards of the mall because it is sexually explicit. Let's all call the mall and complain."

The "exclusively at Spencer's" shirts are also available online, with some of the styles -- including the "Grab America By The Pussy" design -- already sold out. 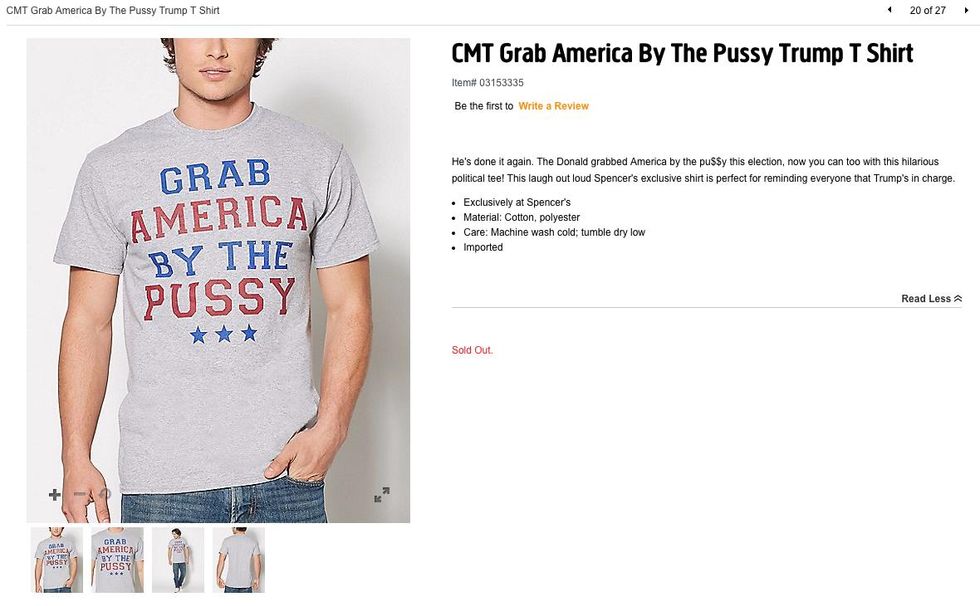 "I'd say they have a lot of shady business practices that people often complained about. I do feel they have gone in an even more misogynistic direction though," another commenter named Nicole Lauren, who claimed to be a former employee, said. "They basically fuel drunken college boy victim blaming behavior. "

However, like Numair mentions in her post, Lauren also advised to not "take it out on the employees."

"If you must, politely take it up with the store manager, but otherwise this is a matter to take up with the corporation," Lauren wrote.

Ed Note: A previous version of this article incorrectly referred to ACON Investments as the owners of Spencer's and Spirit.