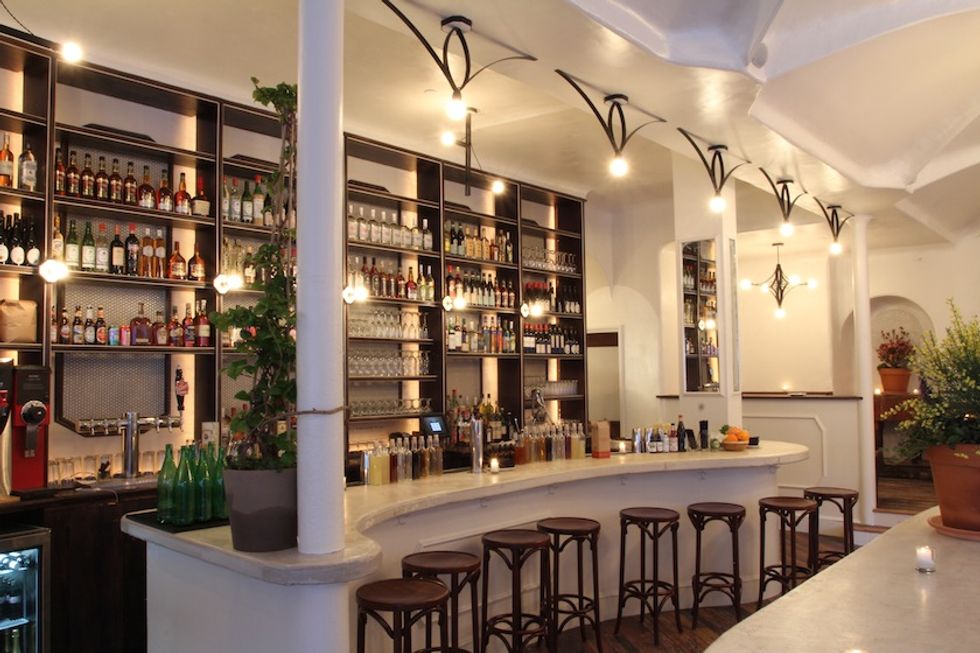 After opening in April 2012, the South Williamsburg cocktail bar Donna scarcely had time to bask in the Best Bar/Lounge Paper Magazine Nightlife Award it garnered that year before a freak electrical fire shut it down last November. It's been a tough time for co-owner Leif Young Huckman and his team, but the bar -- an elegantly cozy spot on a rapidly developing wedge of South Williamsburg bordered by the East River and the Williamsburg Bridge -- is finally serving up its proprietary cocktails again and will officially re-open this Saturday. We stopped by last month, when the place was still crawling with builders, and asked Huckman about the new-and-improved bar, the neighborhood and, most important, the secret to a mind-blowing Cuba libre.

Are you making any changes to the cocktail menu?

We decided to double up on our cocktail list so it's 20 long instead of 10. Five of them are large-format: three are coming out of a draft, one is coming out of the frozen-drink machine and we're going to offer one or two large-format punch drinks that people would have to order 24 hours in advance.

And those are all Donna exclusives?

Donna exclusives, yeah. Jeremy Oertel has always been my beverage manager, and it was always his cocktail list.

We wanted to do a Cuba libre in a draft version, so to do that we decided that rather than get the disgusting Coke syrup, we're going to make our own house cola. Which is pretty challenging because Coke is such a distinctive flavor, but they found a recipe and we tweaked it out, added a little bit of citric acid and made one of the most delicious Cuba Libres I've ever tasted.

With the bar in general, it's always been trying to find a balance between a high-volume bar and cocktail bar. And what I've come up with most recently is that It's basically a superior cocktail bar without a superior attitude. We want people to feel welcome and have fun, but we also want to make excellent drinks.

So if you compared it to one of the Sasha Petraske places...

Well, if you put it in the context of Petraske, the gimmickry that came along with what he was doing had a place, because he was acknowledging a history in cocktail making. But then the people who came along after that had more gimmick than substance. Over time, that's become played out -- I don't necessarily need to go through a phone booth or whatever to have a good drink. In general I just want a comfortable space, but I think many of my generation have grown an appreciation for a beverage where a dive bar isn't always going to cut it. You need to be able to get both of those things in a single environment. I was trained at Freeman's and Gold Bar and Socialista by people who worked directly with Sasha, so I was very lucky. And from that ethos and working with Jeremy, who had the same pedigree, we're creating drinks that have a connection to original recipes and the reasons why they were made the way they were made.

I remember a killer party or two here. What kind of stuff will you be hosting now?

First and foremost, I want to bring Donna back. We want to be certain that we're comfortable in the space and everything gets set up the way we want it, and then we'll reintroduce the food. Brooklyn Taco is coming back; it basically operates like a truck but they cook off-premises and then they bring their food to Donna. Cocktails and tacos: a total no-brainer. The next element we might want to do is a coffee program in the daytime. We get really beautiful sunlight. And then programming at night will continue. We like utilizing local DJs rather than names; we really want to create an environment for people to hang out with each other as opposed to creating like a venue. But we're also upgrading the sound system.

There wasn't nearly as much happening on this block when you first opened, right?

It's been two years since I started building out the bar. We were open for a year and a half. In that time, our only neighbors -- besides Marlow & Sons and Diner, which were there far before us -- were OTB and Motorino, which had recently opened up down the street. After the fire, Baby's All Right and this huge supermarket [Urban Market of Williamsburg] opened up. The condominium right next to Marlow & Sons opened late November, early December. And there's a huge development to the left of us, and the Domino Sugar Factory, and the Williamsburg Savings Bank is now an event space, and they're building a luxury hotel right next to it.

You used to work at Marlow & Sons, right?

Diner was the pioneer in South Williamsburg, and then Marlow & Sons followed. But the one thing those places don't have are cocktails; they're more wine- and beer-driven. When I was working over there, I had a lot of fun playing with cocktails and putting them on their menus, but I thought that what the neighborhood could use -- and I lived in South Williamsburg for five years -- was a cocktail bar. If you're going to take a girl out to dinner at Marlow, where do you go afterwards? Taking that stroll toward the water, it doesn't feel like there's a ton of activity here. And to open that door and see a magical little space...