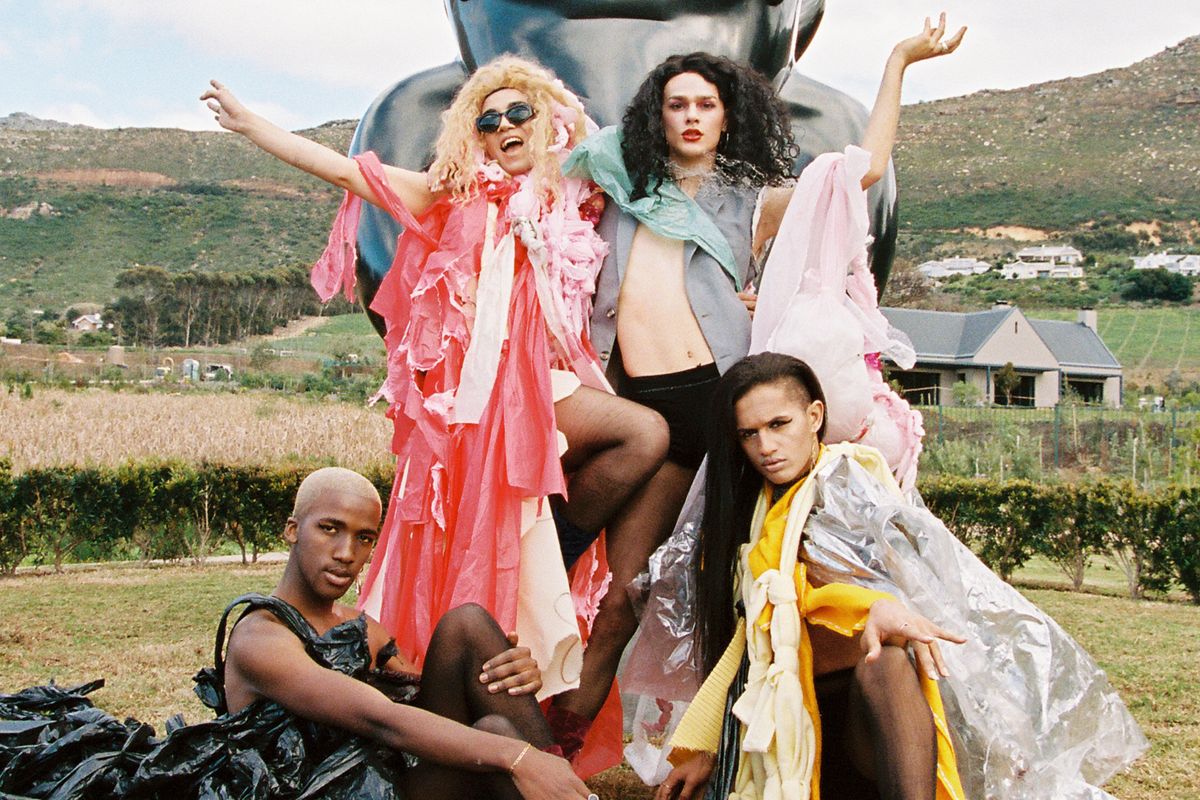 When the iconic documentary Paris Is Burning debuted in 1990, for the first time, global audiences were exposed to New York's queer underground ballroom scene and its pioneering dance style: vogueing. Almost 30 years later, FX's new hit series Pose has glamorously recaptured this iconic time and introduced its beauty to younger audiences. This renewed interest in vogueing recently captured the attention of 26-year-old South African DJ and Performance Artist, Queezy, who together with his group of friends, assembled one of Cape Town, South Africa's first vogueing performances. Queezy captured this groundbreaking moment in the new short film Historical Glitch: Doing It for the Vogue, which also documented queer South African's mission to claim spaces they have notoriously been ostracized from.

Historical Glitch reads like a vintage home video put together by a group of friends, and in a way, that's what it is. The short nine-minimum film was a true labor of love that takes viewers behind the scenes of the group's first voguing performance commissioned by Cape Town's Norval Foundation and curated by local artist Khanyisile Mbongwa. Short clips captured intimate moments with Queezy and his fellow performers Daniel Walton, Mziyanda Malgas, and Chester Martinez, as they rehearsed in their apartment and discussed matters of love, creativity, and freedom. The final performance, held at Cape Town's prestigious Norval Foundation museum, was also featured at the end of the film, where performers can be seen serenading the camera and audiences with classic Voguing moves inspired by iconic Voguers like Willi Ninja and local South African music dance styles.

Although the performers in the short film enjoyed their experiences studying the art of Voguing, none of them, who are all artists in their own right, plan to pursue careers as Vogue performers. Queezy explained that the weeks of practicing and the final performance was just a way to channel their creativity through an art form created for and by queer people. "We're looking at Voguing as another way to express ourselves," said Queezy. "While we walk down the street we're feeling the same feeling as Vogue artists, that same feeling of liberation, that same feeling of self-expression. It's more like a state of mind that we're trying to relay."

Since being the first African nation to legalize same-sex marriage in 2006, South Africa's queer community has continued to carve out valuable spaces for themselves. Local Cape Town events like Miss Gay Western Cape and Death of Glitter have provided spaces for a community that still faces anti-queer hostility, particularly in rural areas. As more and more of these events continue to pop up in Cape Town and other metropolitan cities around South Africa, the desire for queer South Africans to freely express themselves has increased, and Voguing has becoming one of many creative mediums that could potentially take over the city.

Queezy spoke with PAPER about his short film Historical Glitch: Doing It for the Vogue and the importance of queer expression in Cape Town, South Africa.

Why the name Historical Glitch?

Historical Glitch is sort of like looking at the timeline of history and looking at events that are recurring. Voguing, for example, is a dance form that was started in New York in the 80s, but we wanted to relay it in our present day, in our South African narrative. It's basically history repeating itself, but in different ways.

Is voguing popular in Cape Town?

I've been speaking to a lot of people who want to start a ball scene. In New York for example, they have vogue balls almost every weekend, it's not like that here. It's definitely going to be happening this year that's for sure. I know people want to start getting out of their comfort zones and competing in this sort of format.

Can you explain the backstory behind the performance?

When we performed at Norval Foundation Museum, we first started off in their bathroom. We started putting on makeup, getting ready for our day. A lot of queer people do different routines, so we sort of wanted to bring the audience into that environment. We all wore stockings, no tops, wigs or sunglasses, and we were just modeling throughout. It's quite a big institution with a lot of money associated with it, so we also wanted to occupy that space because it's in a part of Cape Town that has a lot of rich white people.

Who are some of the people you idolize in the voguing scene?

I'd say Willi Ninja is my number one. Voguing sort of came from this idea that we're not going to fight each other, rather we're going to do it through dance. And then Willi Ninja took that idea and said, "Let me incorporate martial arts and these movements," and illustrated them through in their own way. I thought it was amazing. As an artist, I look up to people like that because they took one thing and they made it completely different.

What South African elements did you integrate into your voguing performance?

We walked into this room where we had four huge bouquets of flowers to illustrate that this huge institution is our house, our living room. In there, we did different dance forms — stuff that we do in South Africa — which I would say is African to us. Angel-Ho, who produced one of the songs, is also a queer POC artist from Cape Town. It was sort of like our interpretation of what we are now today as African, which is a combination of different ideas from around the world. We're not a stereotype; we're definitely exploring our personal identities. I first started off walking around the room greeting everybody, which is something I love about South Africans –– we are really welcoming. I wanted to welcome everybody to my house.

How did you come up with the choreography?

The performers were me, Daniel Walton, Mziyanda Malgas, Chester Martinez. Chester is a choreographer, he's worked with FKA twigs and he knows voguing very well. In preparation for the performance, we met up at my apartment three times a week for a month. We were doing this choreography and mixing it in with our own dance moves and personal style as well, and Chester taught us about the basics of voguing. I asked, "How do I get into the rhythm of vogue," and Chester said to think of yourself as a cat when you flick your arms forward. That really helped me sort of getting into a voguing mindset.

What role do costumes play in the performance?

We had two sets of costumes. The first costumes were just stockings with thongs on and we were wearing high heels, no tops, and wigs or sunglasses. We wanted to illustrate this sex-positive body expression, which is not super accepted in society nowadays. We wanted to sort of liberate people in that way like it's fine you can love yourself, you can express yourself in whichever way with no stigma attached to it.

For the second part, I made these costumes out of plastic materials and created volume to suggest this glamour. A lot of times, the only people that are occupying these institutions are super wealthy people that are wearing these super expensive garments. I wanted to show that glamour can come in any form — just like how the queer performers in the 80s in New York illustrated that. They were very thrifty in terms of how they dressed, but they were still glamorous and it was still amazing. They transcended class and I wanted to pay homage to that as well.

What did you want the film to capture?

I just wanted the film to capture for once a view of queer people, from queer people. Our voices, not caricatures of us. I think the main main point is that we are people as well, and we are part of society and we are fab and fierce and fun, and come join us!