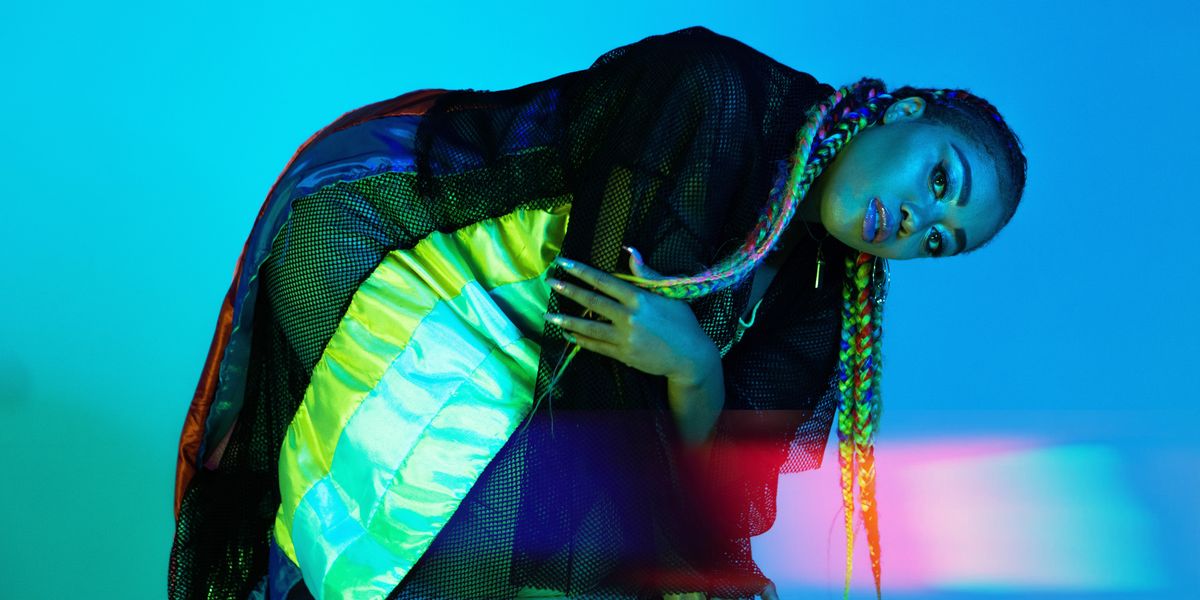 If you've ever wondered what it would sound like to cross the Matrix with frenetic hip-hop beats, you might have come close to imagining Suzi Analogue. A Discwoman affiliate perhaps best known for her glitched out approach to house, rap, reggae, and footwork, the New York-based beatsmith rose through the ranks alongside fellow producers Mndsgn, DevonWho, and Knxledge as a part of the experimental Klipmode collective. From there, Analogue has gone on to found her own label, Never Normal, which stays true to her namesake as one of the few to still publish their releases on tape and vinyl.

Having collaborated with underground sensations like DJ Earl, RP Boo, Junglepussy, and DJ Taye under the umbrella of her ZONEZ mixtape series, Analogue brings a sharp and cerebral edge to her corner of the electronic world. Her latest tape, ZONEZ V.4, sees Analogue push her sound even further than before: intricately woven textures crammed into turbo-charged beats with scorching top lines primed to blow your mind and burn down the club.

PAPER caught up with Suzi Analogue to help you get to know the beat mastermind a little bit better. Follow them on SoundCloud, here.

My sound is electronic, hip-hop, dance, soul, bass and beyond. My sound is all the sounds that reconnect you to finding joy in your body. My sound is the ZONEZ.

My newest ZONEZ V.4 Live show was so far the sickest show I have played because I got to debut my new audio/visual performance during Miami Music Week, plus I had queer artist and pole dancer India Skye kick off the show. It looked like all of my sounds and visions coming to life and the energy in the theater was amazing.

I am influenced by amazing creative Black femme figures who came before me like Betty Davis, Nina Simone, Audre Lorde, and Carrie Mae Weems, but also I am inspired and influenced by people around the world who express and activate freedom. Sonically, I am inspired by everything, really — just hearing life itself.

One of the first MP3s I ever downloaded was Sneaker Pimps' "6 Underground (J Dilla Remix)."

I want to use this space to specifically shout out Miss Tony, the Baltimore club music MC and icon who I feel established such great innovations of how MCs interact with club and dance music. I feel like their musical legacy needs to be more widely known.

To me, Pride is a time to celebrate queerness in the world — even though queer people celebrate life every day against many odds. The beauty that queerness has put into the world needs to be highlighted and celebrated on a regular basis unapologetically.

"There becomes this stigma that queerness is associated with struggle and pain, but it is actually associated with community and beauty that the cis world could never envision."

There becomes this stigma that queerness is ultimately associated with struggle and pain, but it is conversely and actually associated with community and beauty that the cis world could never envision. In the nature of Pride, I'd much rather discuss the breakthroughs that I have experienced with queer identity including a supportive network that feels like a family I can be myself around, affirmations of my existence and and extension of love that propels me to continue creating.

Give us all the resources to spread our music, art and grow. Give us the stages, the venues, the budgets, the marketing, the programming — all of it to be able to tell our stories and share our worlds in a quality way.

Soundcloud gives a sense of digital community overall. There are certain tracks that we know that we will find on Soundcloud that DJs and producers offer as downloads, and mixes that become the soundtracks to many events in the queer community. Soundcloud gives us the freedom to upload how, and when we want, to share amongst our people, and that is powerful.

One of the strongest music collectives, that I have the pleasure of being a part of is DISCWOMAN and their comprehensive mix collection of mixes from femme creators worldwide is a great place of discovery on SoundCloud.

More greatness. No matter what I am doing, releases, shows, my label Never Normal Records, and working on some other projects to reach worldwide. Also, my new show ZONEZ Radio on RINSE FM.