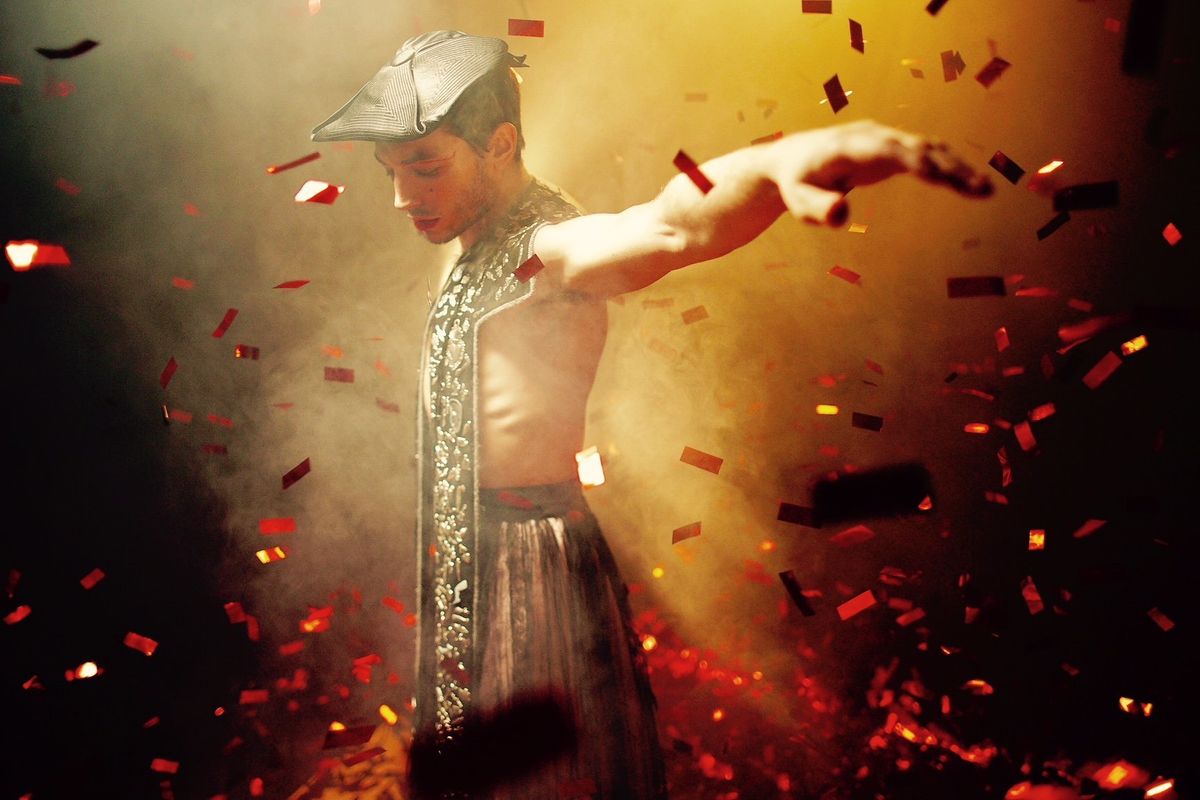 Since launching last year's powerful queer anthem "U.S. Gay," New York City's Sons Of An Illustrious Father has been on a creative roll. It should be no surprise that their new song "Extraordinary Rendition" lives up to the band's burgeoning hype. Comprised of Josh Aubin, Lilah Larson, and Ezra Miller, they present a piece that's both frenetic and incandescent.

Fused with a slight indie-rock meets Nu-Goth visual aesthetic, the video strikes you as something A24 might have produced in their earlier years. It's individualistic without being pretentious. "Extraordinary Rendition" was created in collaboration with director Rafe Scobey-Thal, while dressed by Colleen Atwood, and choreographed by Miller's mother — acclaimed dancer, Marta Miller.

How did everyone meet?

Ezra: Lilah and I met in middle school, Josh was our touring bassist.

What inspired you to write "Extraordinary Rendition"?

Ezra: "Extraordinary Rendition" obviously refers to not only a special version of the song, but also to the U.S. government-sponsored practice of extrajudicial transfer of someone from one place suddenly to another. The song is about the moment when an unknown is suddenly transferred out of the frail and narrow perceptual lens that we usually exist in. And, for one reason or another, the conscious filter breaks, and the way that this person suddenly starts to see things in a strange, familiar [way] and sort of a journey through that experience.

Ezra, how is this is an escape from your acting career, and how are these two fields different?

Ezra: I think that both art forms, and all art forms can serve as relief to the act of doing the other one. For me, music is liberating, and it liberated a practice. How you exert focus and energy are different. So in a way, yes, it is a relief.


Can you talk a little about the band dynamic, and the process behind making the piece?


Ezra: We do things in a couple different ways; the process is always changing. In this case, a fragment of the song that I wrote was brought to the band and changed immensely in the first few rounds of us trying to play it. It was written on piano, but none of the parts that Josh played on the piano now were actually the piano parts. Lots of the current piano pieces now were written on guitar, and then as we worked on it, the second [version] spontaneously developed.

Lilah: I think we might have gone through a period of playing it in a different instrumentation.


Who are some of your musical influences?

Lilah: Alice Coltrane. Some of the musicians that Ezra and I bonded very early in our youth were Nirvana, Patti Smith, Daniel Johnston, Bikini Kill.

How long did it take to put this piece together, from writing, to recording, to producing?

Lilah: We actually wrote the song, then we forgot about it for a couple years, then one of us reminded the others of this potentially great song that we once worked on, and just [started] playing it. It quickly became one of the songs we were more enthusiastic about.


Ezra: As a band with three songwriters in it, we often have a lot of material in a tumbler of sorts, and this was one of the songs that was temporarily lost, tumbling around, then found again — kind of like bingo, like the bingo device.

The video has a Nu-Goth aesthetic. How did the concept come together?

Ezra: We all worked together to develop the video conceptually, and even got this incredible filmmaker, and we had the privilege of working with Colleen Atwood on the costumes, then sort of the happy accident that helped determine the aesthetic was that right by where we lived in London, there was this bizarre structure that we ended up using as one of the sets for the video.

Lilah: [The aesthetic] really came together collaboratively, organically and very honestly sort of quickly. We decided to do it, and made it happen.

Ezra: We have been with the song for so long that a lot of the choices were very clear to us.

And how long did it take to shoot the film?

Lilah: Two days. One in the interior, then we spent a day out in the woods shooting the other stuff — all very sort of D.I.Y.

Lilah: We got it done as quick as possible.


How do you describe the band's ethos?

Lilah: In a few words, I think we try to create a space that is simultaneously interesting, challenging, and expanding, while very welcoming and comforting to people ideally.

Ezra: That's the space we create for each other in the process of making the music. [It's] What we want to share when others get to hear [our music].


Ezra and Lilah: Expect things of us.

Sons Of An Illustrious Father will be playing select shows throughout the spring, including shows at this year's SXSW.