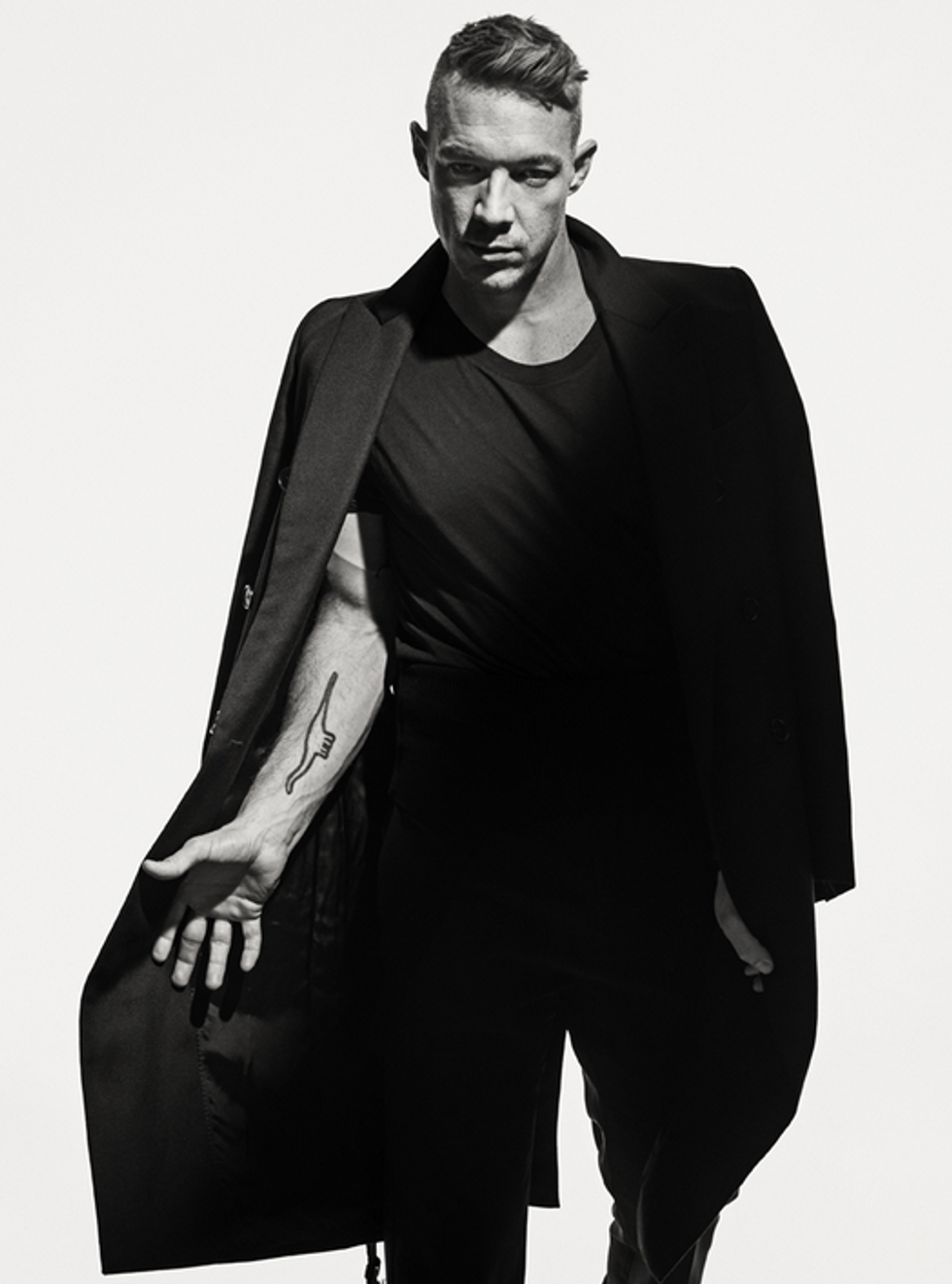 by Gary Pini
PAPERMAG
Photo by Sebastian Kim via Interview.
Interview has a particularly illuminating interview with Rick Rubin and Diplo in their new issue. Below, a few tidbits we learned about Mr. Major Lazer. (Since when was he a school teacher in Philadelphia?) Read the full interview here.

1. He wants to retire "Diplo material" and focus on Major Lazer, even though he's currently DJing like crazy in Vega$$$.

"Diplo has a ceiling in Vegas, and I'm doing great there, but I'm so proud of Major Lazer -- the way it sounds, the way it's mixed. I feel like if I devote my time to that, it could grow."

2. Major Lazer's cartoon for Fox has already completed 10 episodes and will match up to their upcoming album.

The new album is lined up with the cartoon, and then we're touring. And hopefully, 2015-16 will be our year when we can push this to the next level.

3. He thinks Madonna is "hardheaded" but likes artists that have a strong opinion.

My favorite song on the record is the one featuring Nicki Minaj ["Bitch I'm Madonna"]. We were drinking at night--and I don't think Madonna really drinks--and she was like, "Play me just the craziest shit you have." It has, like, this Japanese pizzicato melody and a drop that's just insane, like, a little thing I chopped up. And she was into it. And then I put guitar over it because she likes to start in with guitar. I cut the guitars up. I did it, like, in the night. And then the other songs were, like I said, negotiating. And she's really hardheaded. [Rubin laughs] When I first came in there, she was down for whatever, but towards the middle, it became a lot more about what she wanted to do.

4. He says that all a musician needs to be successful in 2015 is SoundCloud and YouYube.

... Anybody can reach anybody now. All you need is a SoundCloud or a YouTube, and if the song is great, it's gonna rise up there. But even, like, five years ago, labels were like gatekeepers... I mean, you can imagine if you were in a rock band, you have to find a group of friends that are interested in music, start a band, rehearse, learn to play the instruments. Then you have to write songs. Then go find a studio. Write a demo and maybe find somebody who knows somebody who can send a demo to somebody. Maybe get a deal. Then maybe get a release. Then maybe go on a tour. And that's like a five-year process

6. He's got two kids and once taught school in Philly.

I have two children now, and every day I break up my day around three and I pick up my son, then go see my other son till seven. I have to do that because I'm away on the weekends working...my father was a great father. He was around, but he never spent any time with me. I didn't think I needed it, but now I find that I really want to spend every day being with my son, at least playing with him, doing puzzles, whatever it is.

I was a schoolteacher for a while, and it was the worst job. In Philly, there are a lot of social programs. If you have a degree, you can go and apply. I was basically a social worker, but I became sort of a sub teacher in a special program, helping kids with reading or math. But we would also do plays, learn about music ... We were doing lots of fun stuff, but that was such hard work. I couldn't do that anymore.

7. He bought a house with "cash from DJ gigs" and used to sell shitloads of mixtapes at Kims on St. Marks Place.

Back then I didn't pay taxes.

8. He credits DJ Z-Trip with his first big break in Vegas.

He didn't want to DJ at this club called the Palms anymore, so they put me in, and that was a developmental place for me. The Palms closed, but by the time it did, EDM happened, and all these guys came into Vegas, like TiÃ«sto, Afrojack, Calvin Harris, and Hardwell. I took a Monday night at one of the big nightclubs because I had built a little name there. And Monday was the weird night. I was playing hip-hop when everybody else was playing the giant rave music. But my night was so fun that it became one of their most popular parties, and now I've become probably one of the top four DJs in Vegas for residencies.

I was in Fort Lauderdale from about age 7 to 14. And that's where I learned the most about music.

10. The City of Philadelphia's fee for the first Mad Decent Block Parties was only $10, even when they'd get thousands of people.

We had small, weird, independent shows, and we made music there. And the thing about block parties in Philly is that the city will block your street off and the police will come protect it. All you needed to pay then was $10. It's crazy. All you have to do is have most of the people on your block say that it's okay to have a party that day. On our street was an abandoned building, so we only had, like, ten people who needed to sign. We had 2,000 kids come the first year.