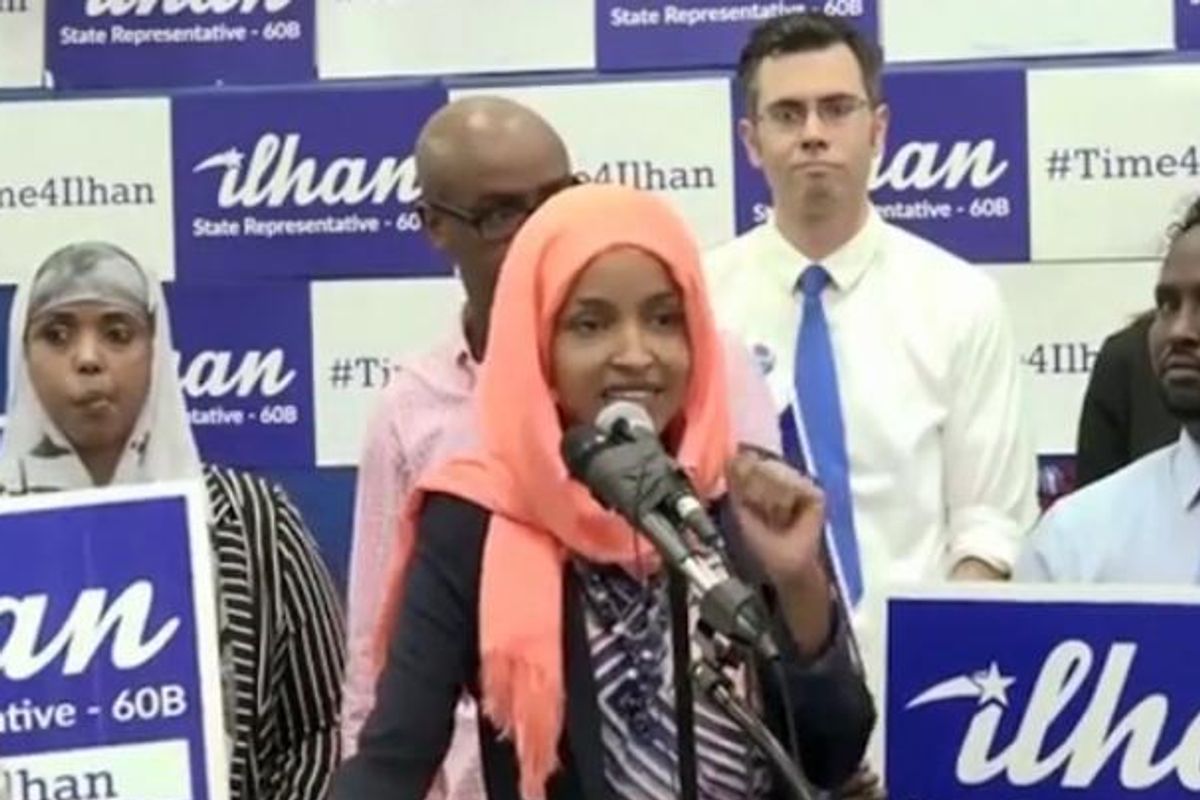 Some Positive Things To Cling To From Last Night's Election

Yes, last night's election was, above all, a knife to the heart. We're shocked and disgusted and depressed and scared. It hurts really bad, and it will continue to hurt for a long long time. BUT there were some positive things that happened last night that we'd like to take a moment to appreciate before we go back to lying catatonically on the floor...

Progressive Democrat Ihlan Omar won Minnesota in a clear victory. She is 34, a mother of three, and she spent her childhood in a Kenyan refugee camp. She is an advocate for affordable college educations, mandatory voter registration, criminal justice reform, and clean energy. In an video she made with Refinery29, she said, "To be immigrant is to be American."

Marijuana is now legal in at least three more states.


California, Massachusetts, Nevada, and potentially Maine have approved initiatives to legalize the recreational use of marijuana. Florida, North Dakota and Arkansas have legalized marijuana for medical use. Whether or not you smoke weed, legalization of marijuana is a major step in dismantling the idiotic "War on Drugs" and removes a major tool of oppression against poor people and minorities.


Oregon elected Kate Brown as the nation's first openly bisexual governor. In an interview with the Washington Blade, she said, "If I can be a role model for one young person that decides that their life is worth living because there's someone like them in the world, it's worth it."


The former Governor of North Carolina, and architect of the hateful, transphobic HB2 bathroom bill, Pat McRory, lost his race to Democrat Roy Cooper. Now sashay away, you piece of shit.


More than ever before I believe in the power of our voices and the duty we have to call people to the table. This... https://t.co/9v5lFm4PPq
— Sam Park (@SamforGeorgia) November 9, 2016

Georgia as a whole may have swung for Trump, but the state also elected its first openly gay man to the state legislature. The 31-year-old Korean American Democrat ousted a three-term Republican incumbent to take the seat. As he said in his victory speech, "This is just the beginning of it. We sent an AWESOME message to the Georgia GOP, and to the rest of the State, and to the rest of the country! So let's keep it going!"

Nevada is sending former attorney general Catherine Cortez Masto to Washington, where she will serve as our nation's first Latina Senator. She said in an interview with Mother Jones, "As attorney general for Nevada for eight years, I was already in the minority as a woman and a Latina. Most of my peers were white males—there were only probably eight or nine women. If you really want to get something done, you have to use your voice to fight for issues that are important for every segment of our community."


Kamala Harris became the second black woman ever elected to the senate.


Former state District Attorney Kamala Harris just became the first black politician to represent California in the senate, and the second black woman to serve in the Senate's history. She told Mother Jones, "As a female prosecutor, let alone a woman of color, there have definitely been moments where people said, 'No, you can't do that.' Well, I eat 'no' for breakfast, and I've never been a fan of the word 'can't'—aimed at me or anyone else."


The children are our future.


We are in the middle of a major demographic shift in this country, and last night's youth voting trends are an encouraging sign that this could be the last election controlled by the interests of white male Baby Boomers.