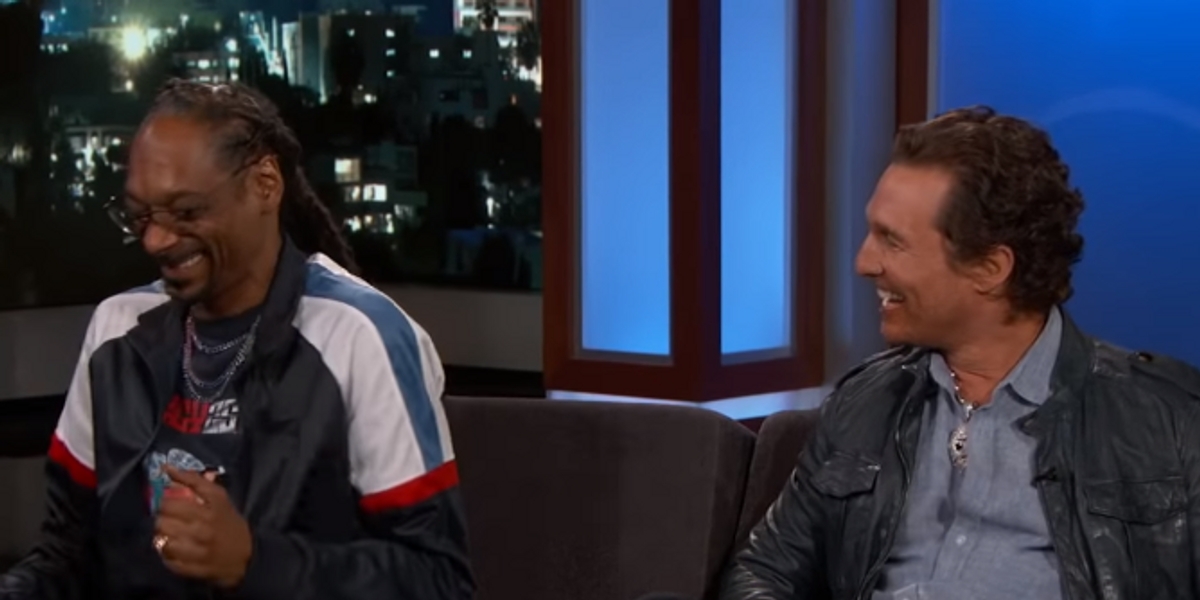 Two stoner icons have finally united, and it's all thanks to Harmony Korine. Yes, Matthew McConaughey and Snoop Dogg have become friends, after filming Korine's new movie The Beach Bum together. We learned more about their instant connection when the two appeared on yesterday's episode of Late Night With Jimmy Kimmel.

"It's magic, I think certain people are meant for each other, me and Matthew are meant for each other," Snoop Dogg explained on Kimmel's couch. "When [Korine] said that Matthew is the star, I was in, I had always wanted to work with him." (Snoop was originally hired to play himself in the movie, but told the director he'd rather invent a new character. What he came up with: a guy called "Ray," short for "Lingerie." Korine just went with it.)

The duo also had a fun anecdote to share about their shenanigans on set. Snoop's character may technically be a different person, but he retains the rapper's penchant for weed: "When I first got to the set, they had a bunch of fake blunts and joints rolled up. And I'm like, 'On no. Who is that for? That's not for me,'" Snoop recalled.

"That was supposed to be for me," McConaughey added. "I show up that night. I know the scene, so I talk to the prop guy on set. I said, 'Look, I got my prop joints.' Which are oregano. I talk to Snoop. I say, 'These are my prop joints. Oregano.' So all of a sudden we do the scene and it's about an eight-minute take… So the scene goes on and right after the scene I just feel like, 'Man, I'm not sure that was a prop.' And Snoop goes, 'Yo, Moondog, that wasn't prop weed, that was Snoop weed.' I said, 'Okay, man! Buckle up because here we go.'"

McConaughey apparently "didn't say another word of English" for the rest of the night. According to Snoop, he started rapping, and did so "for 13 hours straight." A beautiful bromance, indeed.

​Also revealed in the interview: McConaughey wasn't the only friend Snoop made on set. He bonded with Jimmy Buffet, too — they shared a Jacuzzi, and the rest is history.