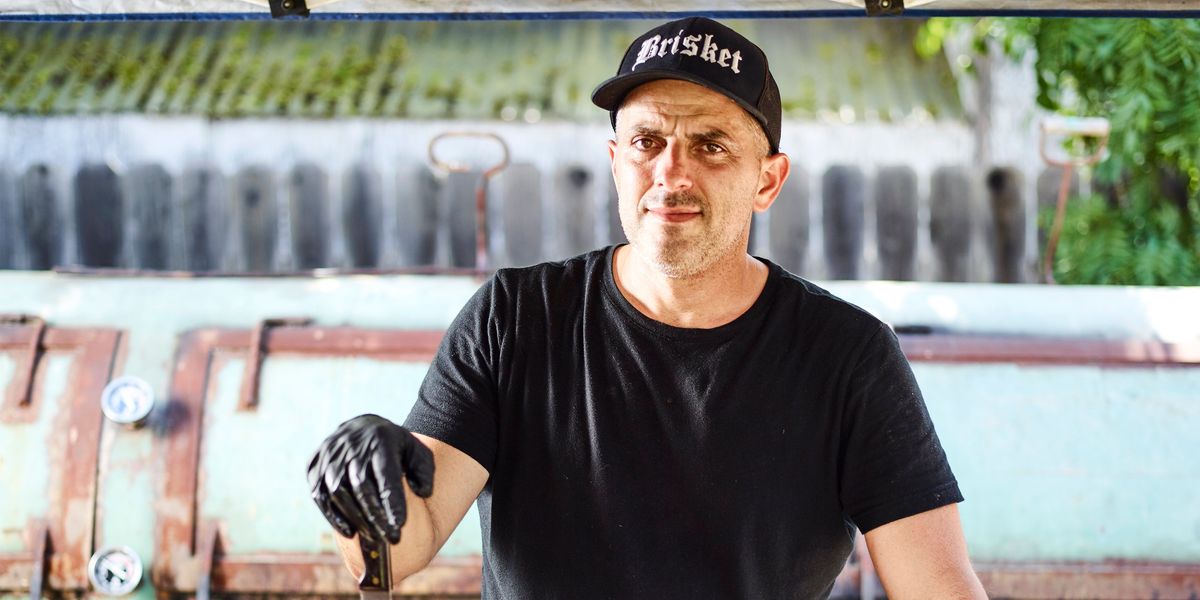 You know the feeling. It's summer. You ring the doorbell of a house you've never been to before. Dogs start barking. You can hear people talking and the faint refrain of Justin Bieber's "What Do You Mean?" You smell the smoke coming off the grill. Should you just go around the side? And then someone pops their head over the driveway gate. "Oh, hey!" they say.

This is exactly what happens today, only what lies at the other side of the gate isn't your standard summer barbecue. No one is semi-mindlessly flipping burgers at a stainless-steel Weber gas grill.

Instead, at the end of the driveway there's an 18-foot-long cylindrical teal-colored smoker with room enough for 50 briskets plus some pork and beef ribs for good measure, all manned by an enthusiastic real-estate broker/Texas-style barbecue aficionado. His name is Burt Bakman, a.k.a. the man behind Trudy's Underground Barbecue.

It's not Bakman's house, but it is his smoker, and he's been here since 5 a.m. Now it's 3 p.m. The briskets won't be done until close to midnight.

"Barbecue is a state of mind," Bakman says, kind of shrugging his shoulders before turning away to pour apple cider vinegar into a spray bottle. But what kind of state? Bakman doesn't specify in the moment, though he goes on to describe his path from curious cook with a small smoker to doing a pop-up at Jon Shook and Vinny Dotolo's Animal — one of his favorite restaurants — as a "journey."

In fact, the more Bakman talks, the more you see how one thing has simply led to another and another and another. Take his pop-up restaurant: Trudy's Underground Barbecue. Bakman has always cooked, but about eight years ago, he was in Texas and fell in love with the flavor profile of Texas barbecue. He came back to Los Angeles inspired. He got himself a smoker and found a recipe that didn't seem too complicated. "The recipe is this," he says. "Get a smoker to the 250 to 275 degree range. Cook it until it's about 200 degrees. Pull it out, let it rest, and you're done." Yet failure after failure taught him that this recipe was anything but simple. "On the road to that 200 degrees, on the road of maintaining that temperature for 18 hours, that's where the difference comes in."

The other thing that's not so simple? Actually getting some of this barbecue. Bakman used to invite people to message him via Instagram for orders, but he wasn't able to accommodate everyone. Now, the operation is much more, well, underground. "Basically," he says, "[on Instagram] when you see that smoke is coming out of the smoker, message me." If you do get through to him, don't expect any frills or side dishes. The choices are brisket, beef ribs, and spare ribs. Hey, what's good enough for Ed Sheeran and David Beckham (two of the many celebrities Bakman has served) should be good enough for you. Right?

And what about Trudy? Bakman explains his namesake: "I was making my brisket in my barbecue. It didn't have a name, but my buddy's mom Trudy would come visit him from Toronto, and she would make her brisket. She does it in the oven — totally different method. But then that circle of friends started calling my barbecue 'The Trudy Special' and it kind of stuck. I think it's perfect."

It's a similar story for how he arrived at pairing his barbecue with a sativa sauce.

"I took a class on how to make this butter [infused with marijuana flower] years ago in Amsterdam, and so the sativa sauce is the same barbecue sauce I always make but with [the addition of] that infused butter."

"What excites me is to have unique experiences," he says before going on to describe waiting in an alley for Sylvester Stallone to come and pick up some barbecue from him. "I come from a small town in Israel. How did I end up here waiting on a corner for Rocky?"

*To "spike" with cannabis, mix in canna-butter recipe to follow, according to tase and desired potency.