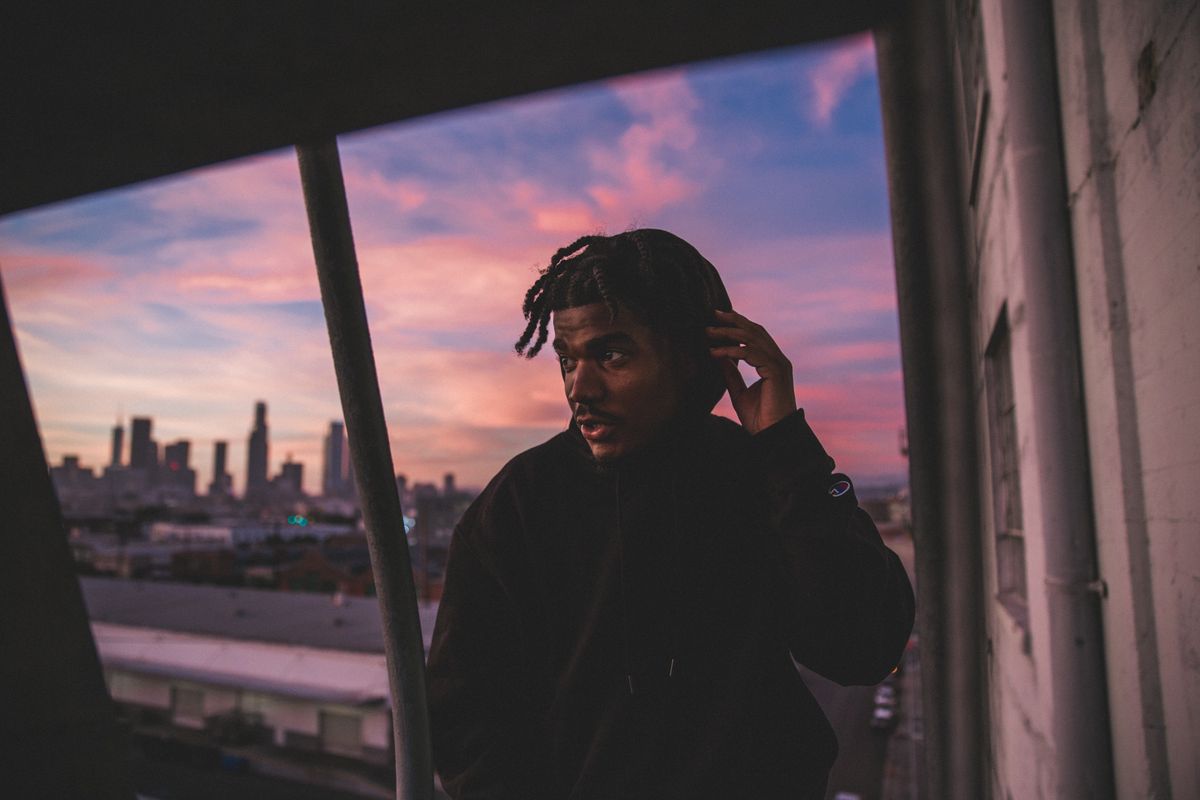 St. Louis artist, Smino, is on the rise. The rapper and crooner didn't so much as burst on to the scene as he arrived. Confident in his voice and never completely satisfied, Smino is very sure of where he stands but wants to keep moving forward. Catching the attention of SZA, T-Pain, and others with tracks like "Anita," "Amphetamine" and the title track off of his first album blkswn, Smino's forward facing R&B works to uplift black culture while not shying away from the realities of being black in America today.

His new album, Noir, punches up the energy on his swinging love-fueled funk for a more revelatory party-starting atmosphere. Enlisting the help of friends and frequent collaborators Valee, Dreezy, Ravyn Lenae, and Bari, the album truly feels like a family affair. With one track effortless flowing into the next, the whole album feels like a late night jam session in Smino's living room with one artist casually dropping in after the other.

We caught up with Smino ahead of his set at Afropunk, in the midst of shopping for a new fit in SoHo. Tagging along as Smino bounced from Acne to OFF-White to Stadium Goods, the singer explained the ins and outs of refurbished sneakers before absentmindedly wandering away or pausing to chat to a fan. A man on a mission and very deep in thought, shopping with Smino became a game of keeping up, turning around to find out that the artist had moved on and was already two stores over.

Pausing for a moment on a nearby stoop, we chatted with Smino about his background, what his process is like, and what the Illuminati doesn't want the public to know:

Let's start with a little background, tell me about yourself.

I'm black, dude. From St. Louis, smoke a bunch of weed, make a bunch of music. Family oriented as fuck. Real down to earth.

How did you get your start in music?

My whole family is musically inclined. My dad, my mom, all of them make music so I just kind of fell in line. I've been doing shit here and there to show my interests and my parents have just supported my work.

What do your parents think about your music?

They love my music. They show that shit to everybody.

Soulful, detailed. Just soulful rap shit, it ain't really like a particular style that I try to put out. I just try to be the dude that can be anywhere I want to be at.

You toured with SZA on the Ctrl tour, how did you two link up?

That shit was popping. I think she just asked me to come on tour, real shit. It was lit bro, bunch of women. SZA's great, it was a great tour. It helped grow my life and women fan base so now there's less dudes at my shows.

Where was your head at when you were creating this new album?

I'm always trying to make a new sound, push it forward. That's my goal with the newer shit. I'm aware of whats going on around me, I'm just kind of evolving with what's current.

What can people expect from Noir?

A lot of motherfucking bouncers, some real head bashers.

Are there any common themes throughout the album?

I got this new voice that I'm doing, its tight. Like 1940s, Dream Girls shit, its crazy.

I've read in interviews that you can be somewhat political…

Have I? I'm not trying to be, I don't even keep up with politics. I just talk about the shit that's affecting me right then and there. I'm far from a fucking politician.

Related | The Summer Might Be Over, But JAYLIEN's Party Never Stops

Tell me about your relationship to fashion?

I like looking fresh. My big sisters they all get fresh, its fun. It's the first creative thing that you do in your day.

And you were saying earlier that you like to craft a new outfit for each show?

I love shoes. I try to keep my shit economical, I buy Air Force 1s and those are like a hundred a pop.. When I'm feeling antsy I might go cop a pair of Acne sneaks, those will run you about five hundred, but I'm not with those insane like fifteen hundred dollar shoes. I feel like you can keep it simple and still be fresh as fuck.

What do you wish that you got to talk about more?

Anything but my music. I feel like I always answer every question about my songs, in my songs, and if you didn't get it then 'what did you think it meant?' That's kind of how I like to leave that shit. It's like a painting. Five different people are going to look at it and have different interpretations, same with music. People turn up to some of my songs that I think are actually slow, it's confusing but motherfuckers do it.

What do you do in your spare time?

I smoke weed, play video games, work out a little bit, play a little basketball, go shopping like any other motherfucker. I'm not crazy about science or like a parrot keeper, I just be chilling in my free time. It's a demanding job, you have to be everywhere. I'm about to get a clone though. Ancestry.com, send a sample in and they'll clone you.

What would your clone be like? Do you have to raise him and watch him grow up?

I'll probably never meet him. On some real shit though, Ancestry.com is cloning every one that send their spit in to them. They got a room full of spit and they're creating new people, its fucked up. I fell like if you cloned me as I am right now it would be a dope dude, hitting licks and doing lean. Like my opposite. 'Yeah he hits licks and do lean though, but its still Smino,' in essence. Jeremih got a clone.

Who else has a clone? Kanye?

No, fuck that's him. You could tell Kanye is Kanye.

​Does Melania Trump have a clone? Everyone thinks she has at least an official doppelganger.

I don't know but Trump has like six of them. Six backup hearts. Billionaires all have clones.

Who feeds you this information?

You got to damn near dig, to be fed. I've been hunting and I'm on to them. Basically, long story short I feel like everything is a hoax and I'm just trying to have my shit ready.

There's a cure for cancer, but they're giving us cancer at the same time and they're not trying to give us the cure to that shit. 'We're going to charge to get treatment' but they also charge you to get cancer, all of these expensive ass groceries at a higher rate. They are doing all this cancerous shit to it so they can charge more, have money, and clone it. If they can clone vegetable they can definitely clone people.

Are you into conspiracy theories?

Yeah, I'll be on Youtube. I've heard so much about government inside jobs and stuff like that. I don't give a fuck though, they can come for me and I'll probably beat their asses. All these cops that get off, you don't ever see them in public anymore, do you? They clone their ass and put them in another country.

Quincy Jones is a clone man.

But he's the one that just blew the JFK conspiracy wide open!

That was his clone! Quincy Jones has a clone. These people don't even ever meet their clones, its sad. To sum it all up though, the future is going to be two Smino albums dropping simultaneously. My clone dropping one and me dropping one at the same time.

Why wouldn't you offset those releases to have year round coverage?

Because there's already somebody named Offset.