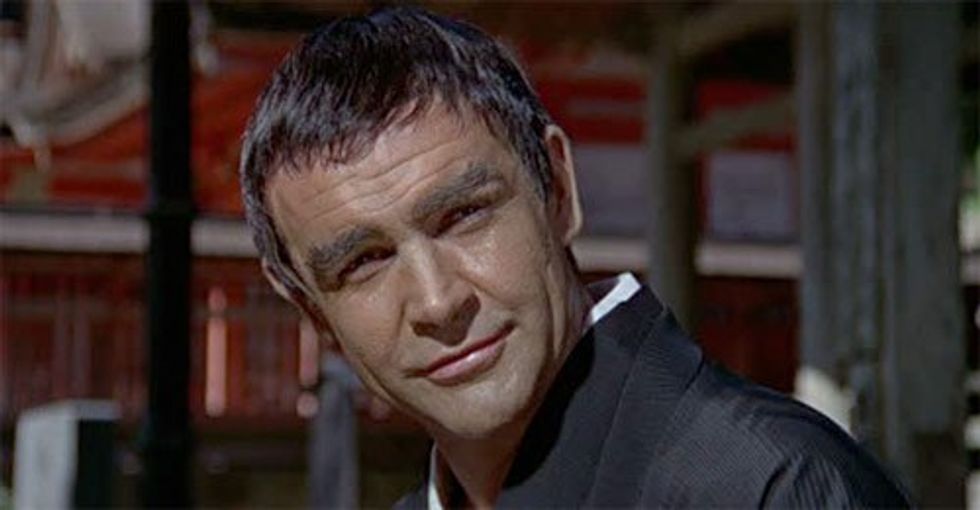 by Sandra Song
PAPERMAG
photo by Matteo Prandoni/BFA
Ever since some Sony emails were leaked about potential new James Bond actors, everyone's been in a tizzy about incredibly versatile actor, part-time grime MC and all-around beautiful person Idris Elba being one of the spy frontrunners. Everyone, that is, except for the current author of the Bond franchise.
Anthony Horowitz, who is the latest author given authorization to continue the Bond franchise, apparently told The Daily Mail that current Bond frontrunner Idris Elba "is probably a bit too 'street' for Bond." And while he qualifies his statement with a "it's not a color issue" insistence, saying that he's just a bit too, uh, "rough" to play the sociopathically suave Bond (though he has since issued a Twitter apology), it's hardly a slip of the tongue. Add this to the fact that this also follows former Bond actor Roger Moore's comments re: Elba earlier this year, in which he said, "I think he should be 'English-English,'" and Bond's got a bonafide bigot streak.
Granted this is all just further continuation of a legacy tainted by overt racism, a franchise that capitalizes on outdated colonialist notions of action and adventure with an "exotic" background. As Christoph Lindner's The James Bond Phenomenon: A Critical Reader points out, in the Bond franchise, "Racism, sometimes understood as a cause of imperialism, ought instead to be seen as ... a natural 'consequence' of Empire."
As Lindner notes, there's an obvious "Manifest Destiny-esque" attitude to the entire Bond brand; one that capitalizes on the idea of the "imperial policeman" loner as a means of reaffirming "Britain's place in a post-colonial world." He needs India, Jamaica, Africa, Hong Kong to "act out the role of his destiny," with the actual people and places just serving as props to this mission.
According to Lindner, racism is used to justify England's continued colonial relevance to these "lesser" nations, the continual reinforcement of white superiority as a "but they still need us" justification; which was symptomatic of 1950s England, which had to grapple with its newfound "second-rate power status" in the midst of the Cold War.
It's an attitude that's rooted in author Ian Fleming's outright racist (not mention misogynistic and homophobic) prose that relies heavily on one-dimensional stereotypes, i.e. that cat-eating Korean line in Goldfinger, which also happened to be followed by a pleasant "lower than apes in the mammalian hierarchy" comment. Or the entirety of his Bond short story collection For Your Eyes Only, which has descriptions of Cuban women as monkeys in dresses and of the men as killers "firing machines with their monkey hands."
The films also unabashedly continue said legacy by reducing characters of color to comic relief or background noise (see the snake charmers, taxi drivers and swamis galore in Octopussy), ignoring the few things Fleming got partially right -- such as the fact that people of different colors can be good friends with mutually beneficial relationships! Or you know, completely abandon it in favor of something like You Only Live Twice, which features Sean Connery in yellowface playing a Japanese character -- though you also can't forget that Dr. No does the same exact thing, opting to cast a bunch of white actors to play non-white roles.
And while there's arguments revolving around Fleming and the films being symptomatic of the times, shouldn't that just act as further impetus to try and turn the legacy around? To update it for the modern era that has a markedly more, uh, inclusive approach to people of color? After all, if anything, the Bond franchise desperately needs a person of color to fill this role -- and Elba is the perfect solution whether you like it or not, Horowitz.
From Your Site Articles