Esther Hershkovits
PAPERMAG
29 March 2011
PAPER founder and editor-in-chief David Hershkovits and his 13-year-old daughter, Esther,  recently took a trip to San Francisco together. They stopped in at the headquarters for new photo-sharing social networking app, Color. Below, Esther fills us in on their visit.

Last week, a new social networking app, Color, was launched. Color allows you to take photos and share them with anyone within a 150 foot radius. Little personal? Then don't use it. That's Color creator Bill Nguyen's advice. Nguyen, who has already made millions on the sale of his music website LaLa to Apple, explains that it isn't an app for personal photos. As for the whole idea of your life being so public, Nguyen says, "You have to understand we're constantly going to be stretching the border between public and private." My father and I happen to be In San Francisco for a couple of days, and how could we resist the offer to visit the Color offices in downtown Palo Alto on the day of the launch? We arrived and were greeted by the same brown paper-covered windows we had seen only moments earlier on CNN. The CNN interview was just one of the hundreds of articles, posts, and blogs about the app, though not all of these reviews were positive. People were saying they "don't get it." Nguyen says "it's a way to communicate with people, and the openness of it raises the idea of what happens in a society where you're totally transparent, everyone can see what you're up to."
Color became the buzz of Silicon Valley when it received $41 million in funding. That's more than even Google raised for its launch. When we arrived, everyone was sitting around testing the new app. They were all eating lunch and when Nguyen got up to greet us we couldn't help but notice that he wasn't wearing shoes. His explanation was that he used to live in Hawaii so "the whole concept of shoes is weird to me." Although shoes might be a new idea for him, the interplay between public and private life isn't. The way he explains it is through an idea social scientists often play with: Would humans rather live on the prairie where they are open and free, but exposed, or in the forest where they are protected and sheltered? What Nguyen and other social scientist have realized is that "we live right on the line between the two. We like to go out and have fun with all of our friends and have this public experience. And then we like to crawl back into our homes, our safety and be private inside the woods."

When Nguyen isn't waxing philosophic or starting multi-million dollar companies, he's having fun with his team. His newest desk is a bathtub sitting in the window facing the street. He and colleague Megan Streich are the only two designers for Color. They also have matching sleeping bags that allow arm and leg movement. Bill sits in bath tub desk, wrapped up in a  sleeping bag, to work. Down a flight of stairs you enter what feels like a little boy's paradise (Indeed, Nguyen built it for his two sons aged 3 and 6). There, you find a train track, a chalkboard for drawing and Lego fort with plenty of Legos. A half pipe ramp used for indoor skateboarding turns into seating with the help of some creatively placed beanbags and stools whenever the building manager comes around. In the other room there are three tents set up if one of the workers really needs a nap, a ping-pong table, and comfy seating in the far back.
Many people are in love with the idea of Color, but not the execution. Nguyen admits "It's a lot of work, there's a lot of stuff we have to fix... It's a long road". During lunch, the Color team was discussing a post from someone at 2 a.m. saying that he was at home and just got Color, and doesn't get it. The team laughed. If you're home alone at 2 a.m., it's obviously not going to be interesting. If you're a homebody, it's not an app for you. If you like to go out and party with your friends and others, then Color could be right up your alley. 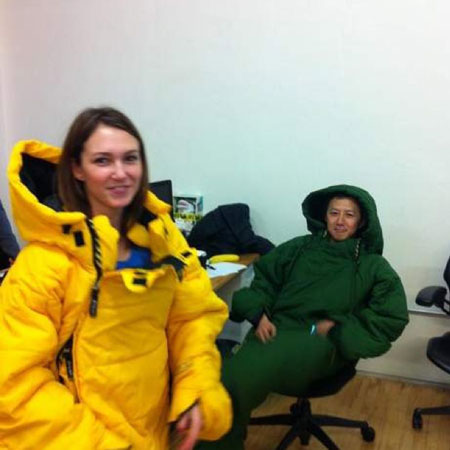 Previous Next
Megan and Bill in their comfy sleeping bags. 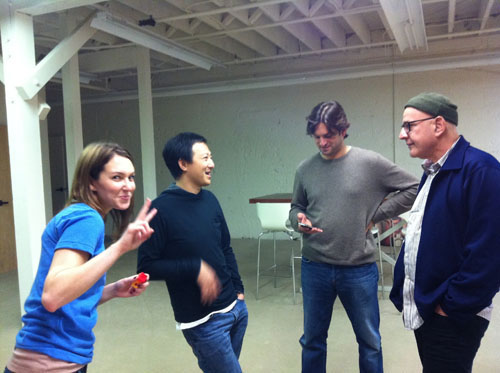 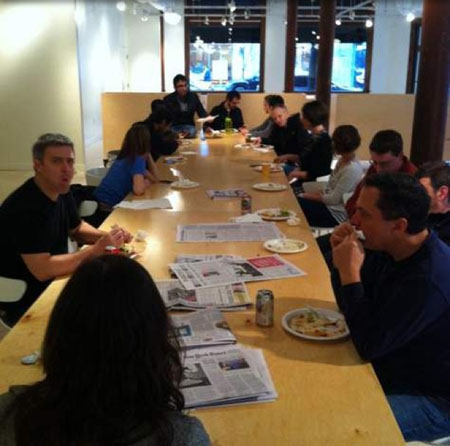 Previous Next
The lunch room 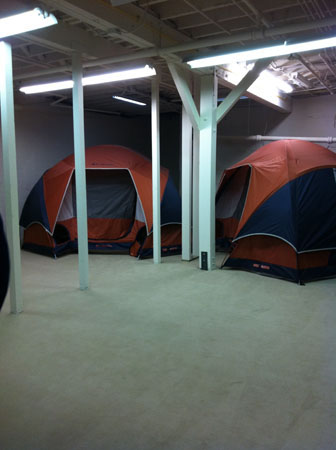