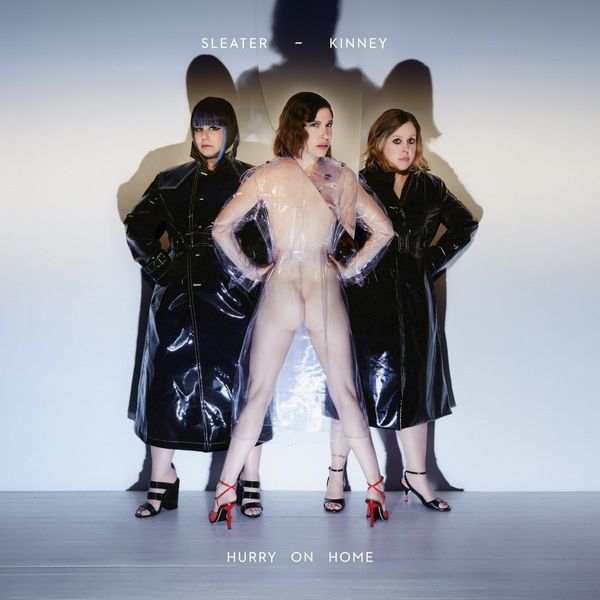 Sleater-Kinney, St. Vincent and Miranda July Flirt With the Void on ‘Hurry On Home’

There is nothing I crave more than powerful women making art about their ugliest and most honest thoughts, feelings and selves, and there's nothing Sleater-Kinney, St. Vincent and Miranda July love more than exploring the intricacies of the female void! A perfect match. Sleater Kinney's new Annie Clark-produced new single, released today alongside an iPhone text message-based music video directed by Miranda July, is a win-win for everyone.

Carrie Brownstein, Corin Tucker and Janet Weiss conjure up the phantom self that all women fear lurks inside them: a parody of an existentially tragic, abject 'Modern Woman', triple-texting a love interest about if they're coming over. The takes place entirely within the screen of July's iPhone — a nod to how the feminized medium of text messages have become a vibrant medium for exploring 21st century female experiences (in the tradition of the fictional epistolary manifesto of Chris Kraus' I Love Dick). July stars as the narrator and Carrie Brownstein, the neglectful lover. She stalks Carrie's Instagram and frantically spams her (with the song's lyrics), pausing only to do a YouTube workout routine (after being horrified by her reflection in the selfie camera), and lick her wounds with a reading from a Tarot app.

However, while the visual is winking, "Hurry On Home" shows this familiar character with dignity and empathy, linking her pathos to a violent cycle of anger, shame, self-loathing and anxiety. In between begging her lover to come back, Brownstein sings about wanting to be disconnected from her bones and skin, directing her anger inward and outward at the world who makes women feel like this: "You know I'm unfuckable/ Unloveable/ Unlistenable/ Unwatchable." This emotional whiplash between abjection and empowerment is the lot of any sentient woman navigating her place in culture and politics in 2019.

Related | Cherry Glazerr Wants to Know if You're Fucking Kidding Them

The song has all the acrid, sinister punch of No Cities, with a newly high-res sound full of furious guitars and manic synths — reminiscent of another brilliant, personal-political feminist record released this year, Cherry Glazerr's Stuffed & Ready. Basically, it's Sleater-Kinney doing what they do best: painting the complex vectors of female characters and searing those stories into your body and brain, with more pixels than ever thanks to St. Vincent and July's visual.

"We're always mixing the personal and the political but on this record, despite obviously thinking so much about politics, we were really thinking about the person — ourselves or versions of ourselves or iterations of depression or loneliness — in the middle of the chaos" Brownstein explains in a press release.

St. Vincent on Instagram: “It was an insane DREAM COME TRUE to work with the women of @sleater_kinney on their new music.”

"Hurry On Home" is the first single off Sleater-Kinney's follow up to 2015's No Cities To Live, which followed their nine-year hiatus. We don't have a release date, but we do have what appears to be the album art, below, as well as gorgeous, BDSM-vibes body horror single art, above. Stereogum discovered on Reddit's indieheads forum that its called The Center Won't Hold and is fully produced by St. Vincent, who we've known to be collaborating with Brownstein since January, thanks to some cute studio BTS. Brownstein and St. Vincent are also releasing a comedy music film, later this year.

Sleater-Kinney on Instagram: “Sign up for our artist pre-sale and be first to get tickets to our upcoming tour. Link in bio.”