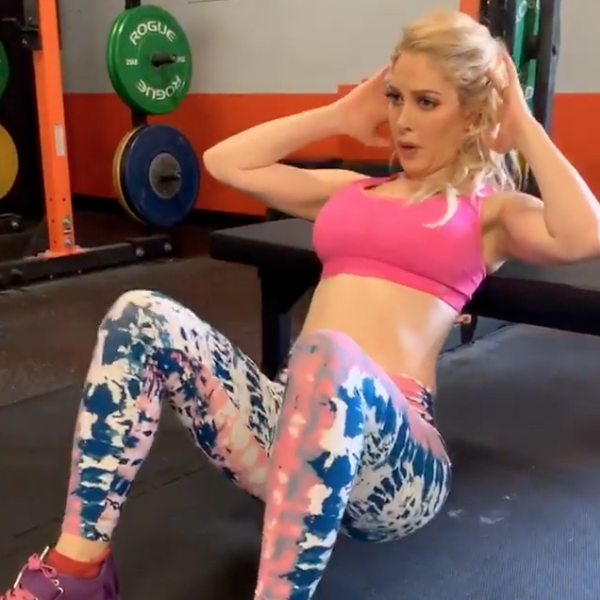 Heidi Montag Working Out to Slayyyter's 'Mine' Is a Stan Fantasy

Either God handed over the master control board to stan Twitter or we have entered a Gen Z, multi-layer ironic spiral — either way, it feels so correct.

Slayyyter dropped her meme-worthy hit, "Mine," on Valentine's Day yesterday and stans made sure to send the newest single flying up the pop charts on iTunes. Now, celebrities straight out of the early 2000s, rhinestoned-Nokia era — the very era her bling-pop bops are in conversation with — are praising the viral star's song.

Heidi Montag, of The Hills superstardom, posted a video of herself doing a set of glute bridges to "Mine" before going out for some V-Day bubbly with her husband, Spencer Pratt. Outfitted in a Barbie pink sports bra, the star finished up her intense workout, which included barbell squats and step-ups, with the infectious chorus of the song, "Oh me, oh my/ Oh me, oh my/ Yeah, I wanna make you mine." Heidi's presumed, videographer, Spencer, also replied to a tweet in support of Slayyyter and posted on his story, encouraging followers to swipe up and listen to "Mine."

Related | Heidi Montag as Herself

It's truly a full circle moment, since Slayyyter told PAPER back in October 2018, after being asked about dream collaborators, that she "would love to write a song for Heidi Montag." She also expressed her desire for Heidi to return to the music industry and bless her starving fans with a new album, stating, "Honestly, I wish she would come back to music because I love Superficial; that was such a good album." At this point, the simulation isn't glitching; it's completely broken.

As if this wasn't enough support from the 2006 gossip tabloid freshman class, Courtney Stodden chimed in on Twitter with a simple "Love this" in reply to the singer's new single announcement. A Stodden tweet speaks a thousand words, though. Slayyyter has long been a fan of Stodden, who discovered fame after marrying her then-51 year old husband, Doug Hutchison, when she was only 16 years old.

Countless other Internet stars showed their support of the song, including Rickey Thompson, who posted an Instagram story dancing to the track. While not documented, her long-time stan and fellow pop sister, Grimes, was also surely bopping along to the track yesterday after tweeting her relief on February 12, 2019, of the drop time announcement.

Slayyyter has managed to captivate the attention of the very culture of celebrity she once wished to emulate, and it hasn't taken long at all. She only came out with her debut, "BFF," in August 2018. In that timeframe, she's managed to release eight solo singles, in addition to several other collaborations with fellow internet-pop stars That Kid and Ayesha Erotica.

Internet celebrity and streaming stardom isn't enough for Slayyyter, though, nor should it be; the singer is taking her hits on the road for a mini tour across the United States. After tickets for her Brooklyn show at Elsewhere's Zone One sold out in minutes, the concert was moved to the Main Hall and more tickets were released, but it's only a matter of time before those sell out, too.

Slayyyter's pop reign is only beginning, and in the words of Heidi herself, we're all fanatics for her.

Stream "Mine" by Slayyyter, below.