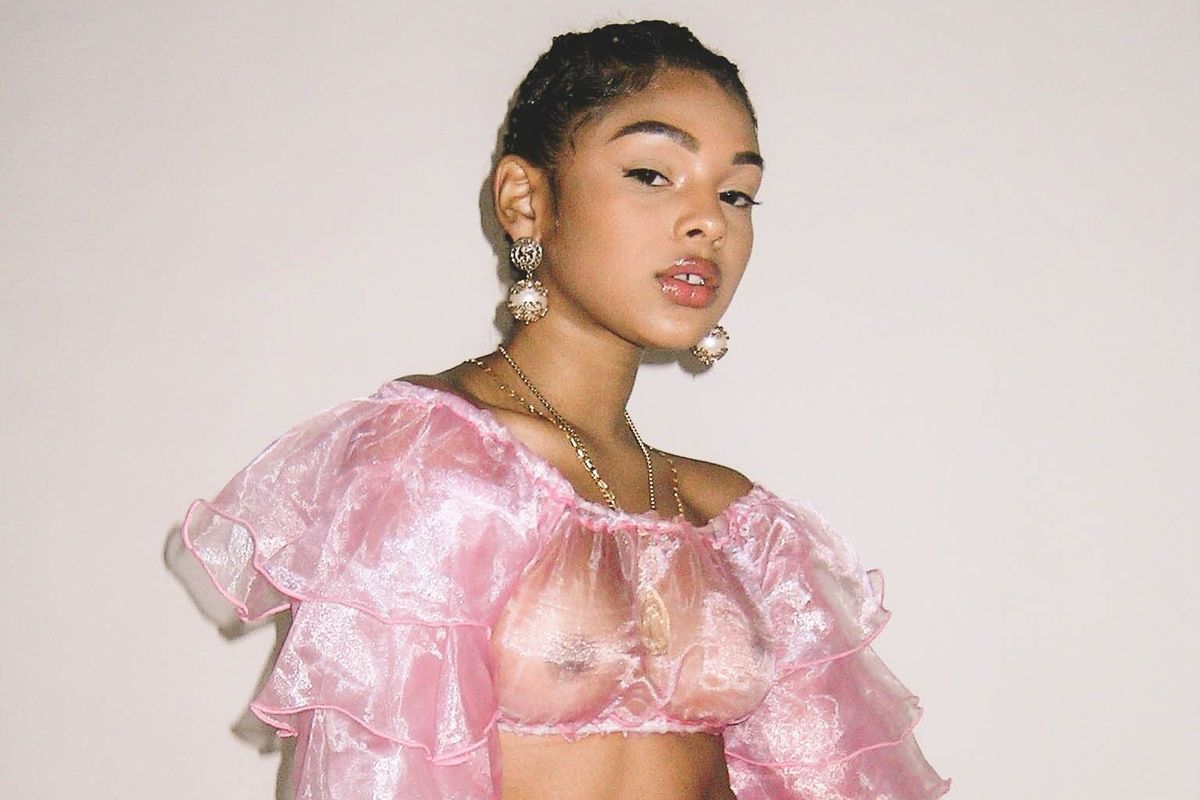 Slashed By Tia Has Your Party Style (Partly) Covered

If you're scrolling ASOS and happen upon an influx of ruffled separates, there's a reason why. Transatlantic designer and student, Teni Adeola (better known as Tia) posted a photo of herself in a red dress with ruffled sleeves, with the caption, "I won't wear a dress unless it's Slashed By Tia," a label that back in 2016, barely existed. Waking up to a mass of direct messages, she has now created a brand privileged by pop stars — she counts Kali Uchis as a loyal fan.

The Nigerian-born, London-raised, now New York-based creative secretly applied to Parsons School of Design instead of pursuing her parents' choice, studying law at "some boring university in London," and since launched a brand that is now synonymous with ruffles and luxury. While PAPER is exclusively premiering her latest styles (a pale pink organza skort and pantsuit, as well as a white satin version of the latter), we also caught up with the talented to designer to talk major Slashed by Tia moments, frustrations and what's to come for the coolest of cool-girl attire.

Read our chat with Adeola and flick through her lookbook images, below.

Part of Slashed by Tia's success seems to stem from the fact it has such memorable designs, what was the creative process behind creating your now-iconic ruffle sets?

The ruffles came about when I was in my final year of high school writing my art history dissertation based on garments in 16th century Spanish court paintings. Ruffles were only worn by royalty at the time, due to the fact that they were extremely expensive to make. A tiny ruffle collar would be added simply for visual interest, but they grew larger as time went on and beautified every garment, in my opinion. They just stuck with me. For me it was all about incorporating them into the trends of today.

I can imagine how big a part your Nigerian/British heritage also played in formulating your style.

They both contributed in their own ways, it was in London I studied art history and my teacher who was an amazing lady who took us to Florence — which was a life changing trip for me. All the paintings are still stuck in my head. One of my favorite paintings was of The Grand Duchess Maria Maddalena, The Grand Duke Cosimo II de Medici, and their elder son, the future Ferdinando II. I recommend everyone to go and look at it and see the ruffles on them! Just looking at it, you begin to feel like royalty yourself. I'm obsessed with the Medici Family.

You're still in school, which is wild. Tell me a little more about your background, did you always envision a career in fashion?

Since I was about seven, I would use my mums African fabrics called 'Ankara' to make little tube dresses for my dolls. It wasn't like I just woke up one day and said "Oh I'm gonna make clothes now." I interned for a Nigerian designer named Ituen Basi when I was about 11 who I learnt a lot from. She would make me read a fashion book everyday and I still refer back to some of them. Being from Nigeria, college is just a part of life and just another stage you have to go through. You don't really get a choice per say, while I was in my final year of high school, my parents had plans for me to study law in some boring university in London but I secretly applied to The New School with the help of some teachers I was close to in my high school. I ended up getting a scholarship and confessing to them after which they had no choice but to let me go,

It's so exciting to see the traction you've gained over the past year, what have been some really defining moments for Slashed by Tia? When did you feel like you have a real movement on your hands?

I think one of my defining moments was having one of the Little Mix members wear my clothes in their "Reggaeton Lento Remix " music video. I watched them literally get put together as a group on X-factor in London as a little girl and they became one of the biggest girl bands in the world and it really was surreal having my sister back home sending me photos of the TV saying "Omg they are wearing your clothes!" I would say I had a movement on my hand when I posted a photo of myself in the first red ruffle dress I made. My DMs got flooded with girls literally saying they'd pay everything for it, I even ended up making one for someone's wedding shoot!

Having the Kali Uchis co-sign was such a massive get, how did she discover you?

She discovered me through Instagram and we began chatting via DM and brainstorming on making something custom/different for her tour. That was actually where the skort set evolved! She's very supportive and I look forward to seeing her in more Slashed this year.

The label also has an amazing social media presence, which you've called "a blessing and a curse." Can you expand on that?

It's a curse because social media is so oversaturated now and gives not just huge corporations but even just individuals leeway to just take ideas. It took months of tears and frustrations to get to a point of waking up to DMs from loyal supporters and people tagging me in photos saying "look they copied your design" or "did you make this" and just having to completely shrug it off and remind myself that the people who know, know. It's a blessing in the sense that I've built my audience just from Instagram...I'm able to connect with incredible models, makeup artists and hairstylists and I pride myself on almost always having an all female team.

You privilege diversity throughout your campaigns, almost always featuring curvier models and women of color. I know you've said you created the line to cover your body — was that a conscious decision when building your brand?

I definitely created the line based on covering my body which the silk cross back shirts that I was making in my dorm as a freshman, however, as I spent more time in NYC, I grew more confident as a woman and that confidence spilled into my art. Now my ideal Slashed girl in three words would be bold, badass and carefree.

What do you envision for Slashed by Tia? Where would the brand ideally end up?

My dream for Slashed by Tia is to keep on making items suitable and affordable for every girl such as the reflective ruffle sets and the skort sets, however my end goal has always been to make couture garments and to be commissioned by icons such as Bianca Jagger for one off garments. I just have to pace myself as my parents remind me everyday that college comes first so once I'm done with that I will release all the ideas in my head bursting to be brought to life.

Get your first look at Slashed by Tia's latest styles, below, or follow her on Instagram here.